The gay man who won adrenaline-pumping Network 10 series Hunted has said he’ll use his share of the prize money to start a family.

This week, Stathi Vamvoulidis (above left) and Rob Harneiss (above right) were both named winners of the show.

The two men spent 21 days as “fugitives” on the run around Melbourne trying to avoid an expert team of “hunters”. One by one their fellow fugitives were caught by the expert team pursuing them.

Stathi, who’s gay, told Yahoo! Lifestyle about his plans with his share of the $100,000 prize money.

“I’ve always wanted to be a dad and it’s pretty hard as a single gay male, both from a biological perspective but also financially,” he said.

“There’s been such an amazing response from other gay men who said that they’ve also wanted to be a dad but never thought it would be possible.

“Seeing someone else on national TV has reignited that passion for them.”

Rob, who also won, also told the outlet, “We share the same dream of becoming fathers.

“My wife and I have been trying for the last five years, so to finally be able to have that disposable income to go towards IVF and all the treatments that come with it, it’s incredible.”

Stathi and gay mate Matt competed together on Hunted

Stathi Vamvoulidis, a humanitarian worker, competed on the show alongside his friend Matt (both pictured below), who is also gay.

“Matt and I went on the run to challenge some stereotypes, give more visibility to our queer community and help start new chapters in our lives,” he said.

While Matt was caught by the expert team of surveillance experts pursuing them, Stathi managed to make it to the helicopter at the final extraction point just in time.

Both Stathi and Rob have confirmed they’ll both split the prize money with their teammates.

“One hundred per cent we will be splitting it with Matt and Jake,” Stathi told Yahoo! Lifestyle.

“There was no discussion about it because that was just assumed from the get go.

“We went into this 50/50 and we actually wouldn’t be where we were without our best mates.

“If we had started as solo contestants on day one you can’t guarantee we both would have made it on that chopper!” 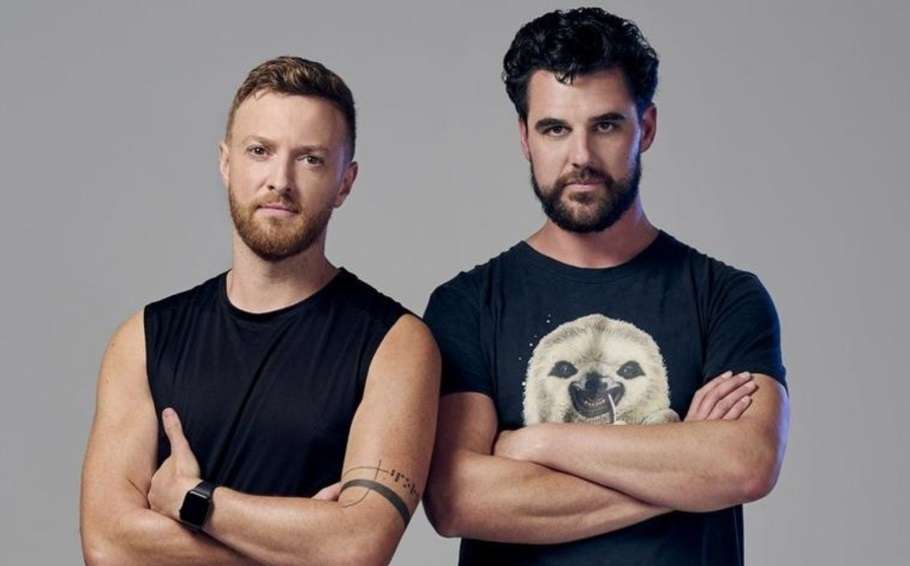 Stathi said he’s “so happy and proud” to have won alongside Rob as the new Network 10 TV series’ first champions.

“We’re so humbled by all the support and I will be forever grateful to Hunted for putting me one step closer to achieving my dream of being a dad,” he said.

“I truly hope that we have inspired others to embrace their authentic selves.”

He said the show was “a once-in-a-lifetime opportunity I will never forget.”

This week, Network 10 announced applications for season two of Hunted are now open.

Filming set to take place in Melbourne from February 20 to March 15 next year.