Will & Grace isn’t going away any time soon.

The popular gay sitcom made its return last year, with Debra Messing, Eric McCormack, Sean Hayes and Megan Mullally all returning, along with the show’s creators Max Mutchnick and David Kohan.

The revived Will & Grace has proved a hit with viewers and NBC announced it had commissioned a third 18-episode season of the revived show, before the first season has even finished airing.

It also boosted the already-commissioned second season from 13 episodes to a full 18.

NBC Entertainment chairman Robert Greenblatt said: “As far as I’m concerned, we can’t get enough of Will & Grace and 23 more episodes is music to my ears.

“I’m overwhelmed by the euphoric response the new show has received from the press and the audience, and my hat is off to the unrivalled writing team of Max Mutchnick and David Kohan, as well as the brilliant directing of Jimmy Burrows, for consistently delivering one of the best shows on television.”

Singer and actress Jennifer Lopez is set for a guest spot on the popular series. J-Lo is set to appear in two upcoming episodes of the current season, more than a decade after she last appeared on the comedy. 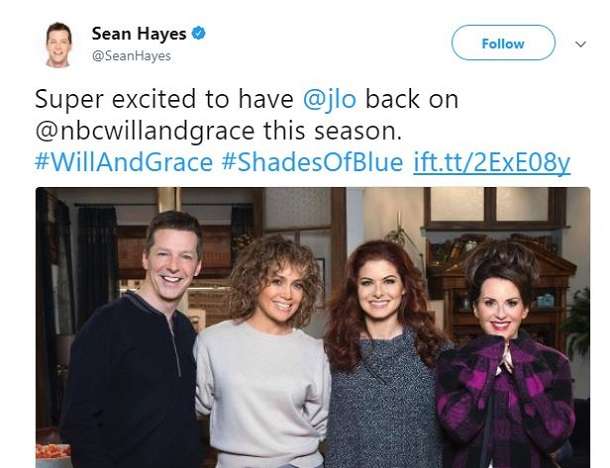 Sean Hayes said: “Super excited to have @jlo back on @nbcwillandgrace this season. #WillAndGrace #ShadesOfBlue”.

Will & Grace, which originally aired from 1998-2006, has a great legacy. In addition to winning 16 Emmys, including Outstanding Comedy Series in 2000, it is credited with paving the way for LGBT characters on TV, featuring the first openly gay lead characters on a prime time network series.