Disgraced Victorian Liberal MP Tim Smith doesn’t seem to understand that some people should lie low for a while. That would include drunk drivers who crash their cars into other people’s houses. Tim Smith crashed his Jaguar outside a child’s bedroom last year while more than twice the legal blood-alcohol limit.

The MP resigned from the opposition frontbench following the crash. However, he initially resisted pressure to announce he would quit politics at the next election. But pressure from key backers and senior federal Libs saw him eventually come to his senses.

Smith went on extended leave following the drunken crash but returned to the Victorian Parliament earlier this month.

Previously renowned for controversial social media posts, he refrained from stirring shit since the crash. However, he obviously missed the attention. He generally shares memes about Daniel Andrews. It actually seems quite obsessive. It’s hard to find a pic of Tim Smith on his own Facebook page. But there’s plenty of the Victorian Premier.

Smith returned to the fray Friday, posting a meme about the Ukraine War.

Over a photo of an explosion, possibly taken in Ukraine, he posted some irrelevant bullshit about pronouns.

“Maybe it’s time we start worrying about real issues instead of our pronouns?”

Smith posted beside the image, “Save Ukraine.

“That’s a real threat to ‘diversity and inclusion’.”

As Granny used to say, some people have no shame. 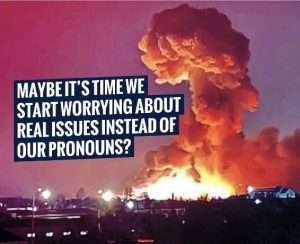