Most failed political candidates grasp for ambassadorships or other political appointments. Or perhaps trip the light fantastic on Dancing with the Stars. But not Katherine Deves. The losing Liberal candidate for Warringah’s first notable appearance since the election is as the star attraction of a student pub crawl.

The Western Sydney University Liberal Club began promoting the junior conservative shindig earlier this month. And there’s been an amazing response! The group allowed 22 days for promotion, posting the ad for the July 29 event on July 7 and 22 people have signified they’re going. Spooky, hey?

22! Don’t bother hiring a double-decker bus. Seems like attendance will be on a par with the vote achieved by Deves in Warringah.

The group posted that ‘Kathrine Deves, the Liberal Candidate for Warringah’ would join them for their social night. Sorry to be a worry wart but as an old proofreader let me correct that.

You can’t even spell her name right. It’s KathErine with an ‘e’. And, she’s no longer the candidate.

So, the phrase should read, ‘Katherine Deves, the failed Liberal Candidate for Warringah’ 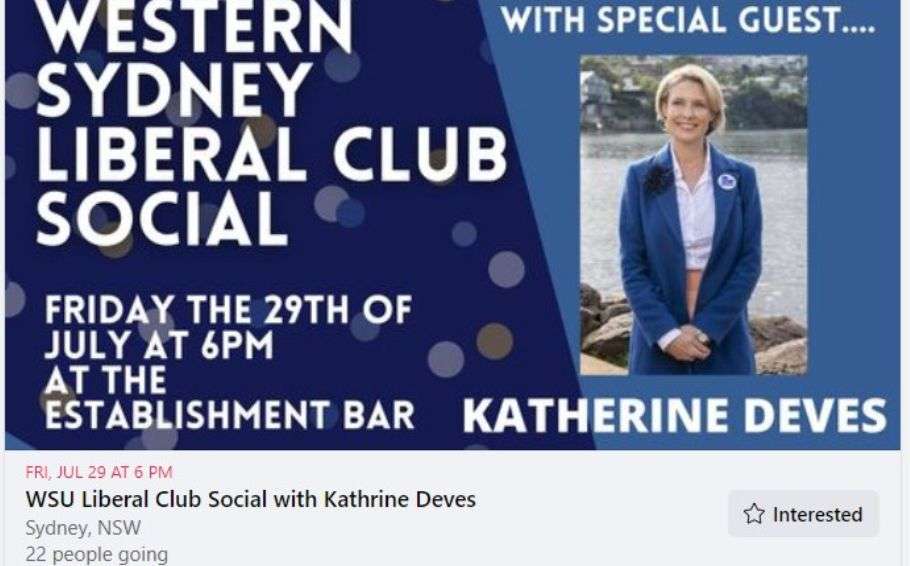 Not your traditional pub crawl

It appears the Western Sydney University Liberal Club social night will not be your typical pub crawl. I’ve hosted and compered a few such events in my time. They often involved entertainment like topless waitresses, g-string waiters and fake orgasm competitions.

But I doubt the serious-minded members of this elite breeding ground of conservative pollies would tolerate such nefarious activities. Nor Katherine Deves.

Maybe a round of pub trivia instead.

“Which 2022 political candidate lost her own election bid and is attributed blame for collateral damage to nearby sitting members?”

Both major parties ignored the LGBTIQA+ vote. It cost them dearly!