Mardi Gras is right around the corner again and with that comes the Queer Screen Mardi Gras Film Festival 2022.

While Mardi Gras is most known for the headline parade and parties, there is always so much more happening on either side of the main events.

A staple of those events is the Queer Screen Mardi Gras Film Festival, which kicks off tomorrow, the 17th of February.

With Covid-19 ruining some events, this one is one you can even participate in from the comfort of your own home.

In 2022 the Mardi Gras Film Festival invites you to the Queer Frontier.

The festival will feature an incredible 119 films from across the world.

Taking place from the 17th of February to the 3rd of March viewers will be transported to 37 different countries.

Films will range from feature films to documentaries, episodic and short films.

The 2022 festival will have a particular focus says festival director Lisa Rose.

“The Festival’s two program strands, Focus on First Nations and Rebels With a Cause, honour stories of queer strength and resilience, be they factual or fictional.”

“They shine a light on people with the resolve to survive and thrive in all possible circumstances.”

Films like opening night feature Wildhood as well as stories like Pure Grit and Finlandia will help drive the focus on First Nations stories.

Meanwhile, Rebels With A Cause will be represented through films like Denise Ho: Becoming the Song, Hating Peter Thatchell and Rebel Dykes.

The festival truly features content for everyone and can also be watched by anyone around the country.

Be part of the Mardi Gras Film Festival from home

There are still many people unable to travel to Sydney for the festival, however, they can still be part of the festival from home.

Tickets are available not just for the cinema events, but also to stream online.

Keen viewers can head to the Queer Screen Website to purchase online tickets.

Once purchased films will be available to view for the duration of the festival or 72 hours from first playing.

It’s a fantastic initiative by the festival that recognises the changing nature of live events at the moment.

The initiative also provides accessibility to this vital and inclusive storytelling across the country.

Now the most important decision will be, what to watch

What will you be watching?

Lisa Rose is Queer Screen’s Festival Director, she is passionate about the visibility and inclusion of the festival.

Each film of the 119 on display shares stories for all aspects of the community, at a time when she believes it is most vital to our visibility and spirit.

“It’s more crucial than ever to see positive representation on-screen when LGBTIQ+ youth are being so casually crushed by the nation’s leaders.”

With so much to choose from Lisa has narrowed down her Top 5 to stream at home during the Mardi Gras Film Festival.

Take a look below.

With a rather delicious cast, this gentle Italian drama not only provides some eye candy but a satisfying story about perfecting the recipe for your own personal happiness.

When former polyamorous lovers are reunited, desires and disappointments are rekindled as they tackle the past, present and future of the relationship.

Highly stylised with some very camp flourishes, this semi-autobiographical tale of a young gay Russian in America is unforgettable.

Two mothers fight for the rights of their openly queer children in this powerful and insightful documentary from Korea. 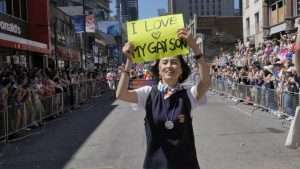 No Straight Lines: The Rise of Queer Comics

Featuring fascinating interviews with famous and up-and-coming queer comics, this documentary paints our shared queer history in a new light.

Tickets for all films and Festival Passes are on sale at www.queerscreen.org.au

Watch the official trailer for the Mardi Gras Film Festival below.

Watch: ‘Venus’ is a must watch movie, streaming soon on Revry