Vintage male underwear advertisements can be sexy, funny or crazy. Some even appear to give a wink and a nod to gay purchasers.

Scroll down for pics.

But some are outright bizarre.

Whoever thought wearing 20 micrograms of radium near your balls was a good idea?

Apparently the radium worked as an energiser.

Maybe so – until it killed you, anyway.

The makers of vintage male underwear understood their customers wanted to get stuff done in their underwear. 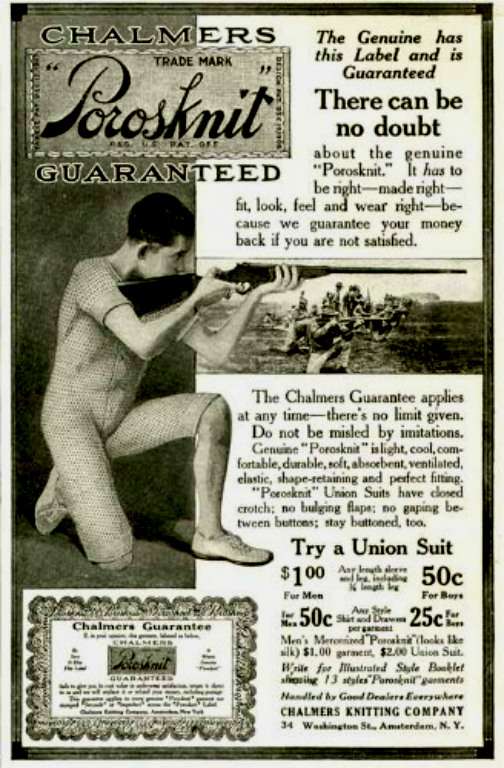 The ‘Porosknit’ Union Suit was absorbent according to the above ad. That absorbency came in handy if the animal you were aiming at gave you a sudden fright. It also featured a closed crotch. Crotchless underwear was apparently not yet a thing. Certainly not for hunting at least.

However, Spruce underwear allowed even more activity than the Union Suit.

In Spruce underwear, a gentleman could shoot, fish, row and smoke a cigar. No idea what the middle guy does though. He might be included just to look pretty. 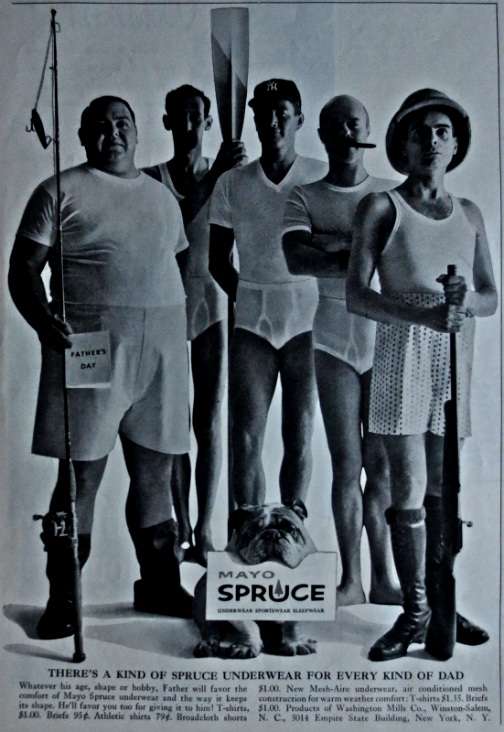 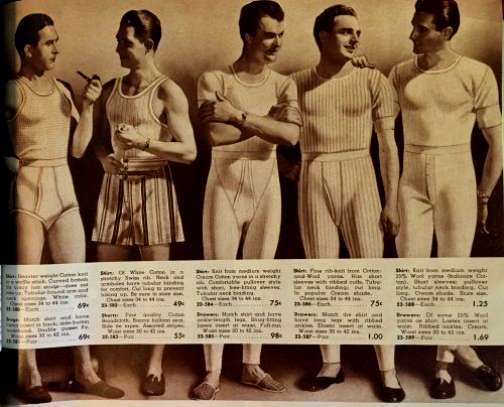 But, male camaraderie does not demand outdoor sports.

Sometimes it’s okay to just stand around chinwagging with a bunch of mates.

You might even smoke a pipe while doing it.

Notice the daring addition of stripes to one pair of boxers above. One hopes for the sake of the genteel folk of days gone by that the stripes were in demure shades – nothing too loud and riotous. 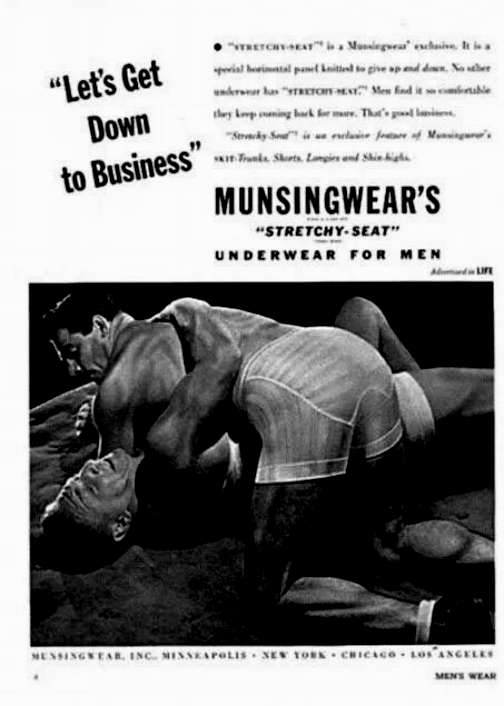 Be aware, however, that arguments can arise on these occasions – in the following ad Fred is upset Pete is concerned about “two measly, miserable inches.” Someone tell Fred two inches can make a huge difference. 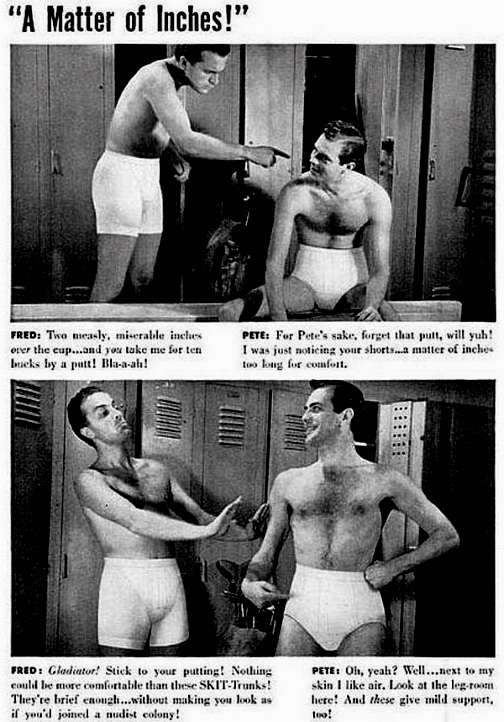 Hazing today is a serious issue. However, back when Jockey made this ad, it was still all good-natured boys will be boys type stuff. Despite that, Jockey made sure lads knew, to avoid hazing, buy Jockey brand underwear. 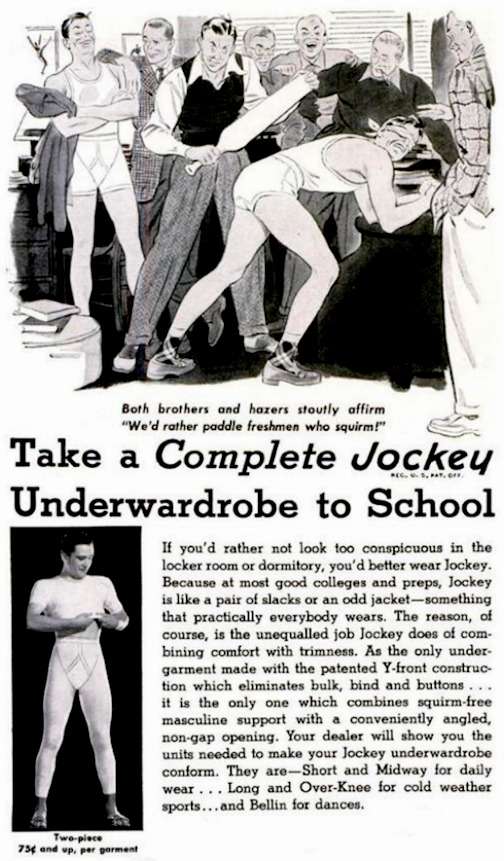 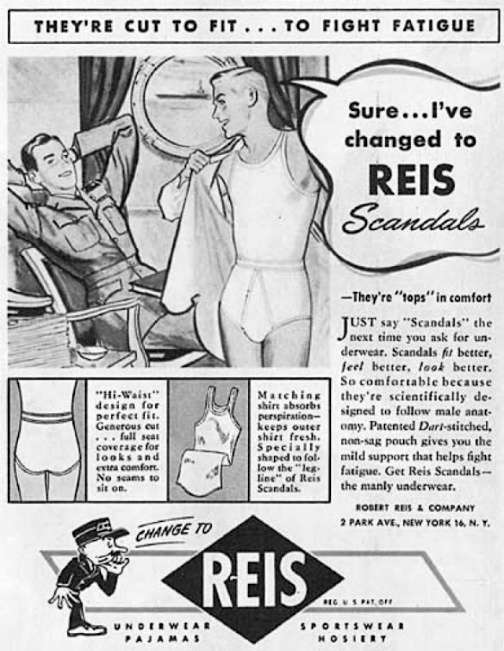 Who knew balls became fatigued just hanging around in underwear?

But fatigue must present a bigger problem than most people ever imagined.

Otherwise, why risk the Testone Radium Energizer and Suspensory with 20 micrograms of radium? 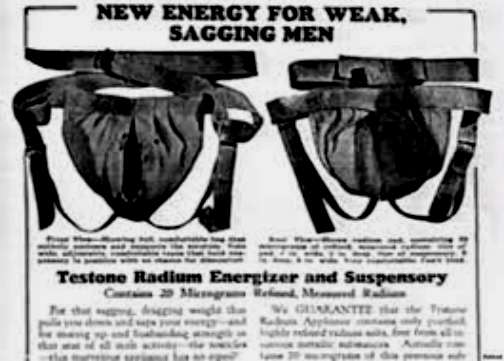 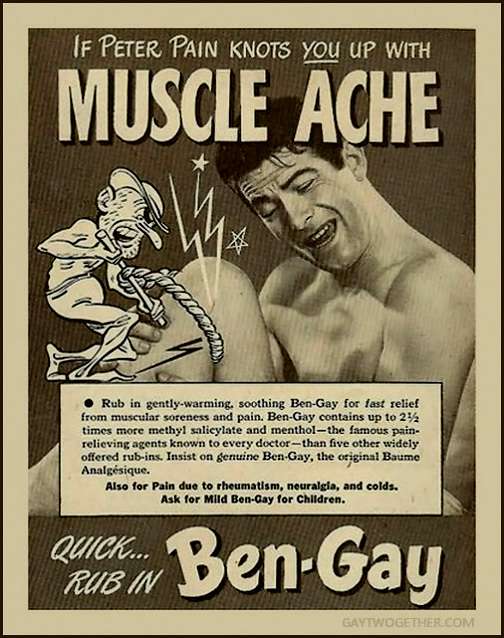 Suspensory was an early name for a jockstrap. Meyers Manufacturing sold one with “no oppressive band on the sack.” Thanks for that.  Also, they advertised: “Made just as nature intended.” So was a ballsack actually. 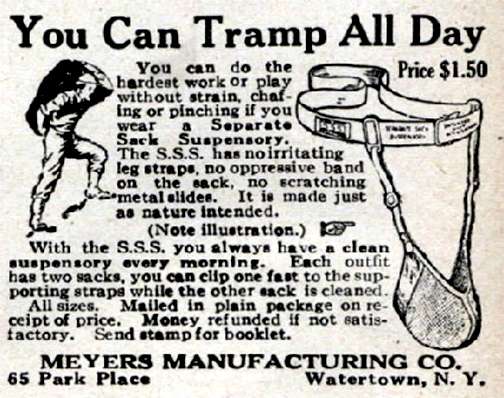 Harking back to Long Johns, what better way to advertise the Hatch One Button Union Suit than with a mate winsomely toying with that one button?

As the years rolled by, men wanted briefer underwear, even, in fact, briefer swimwear and Speedo leaped to their assistance. Check out this delightful swimsuit, so brief and tight, it apparently requires the wearer to do a tuck job. 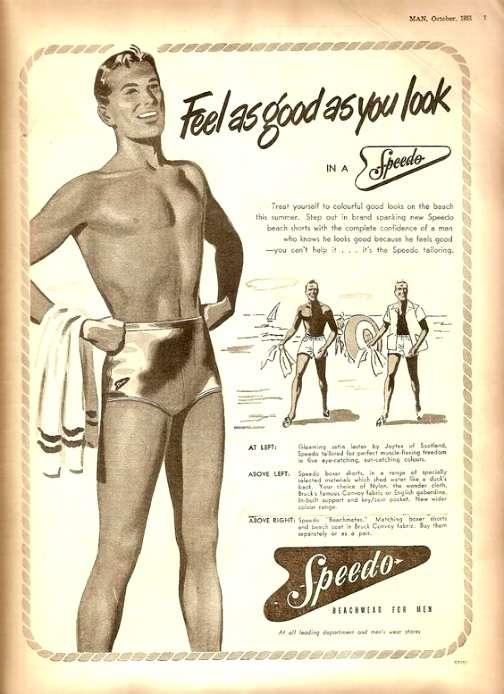 Fast forward to the seventies and men’s underwear underwent a dramatic change. Whether for the better, we leave to the individual to decide. 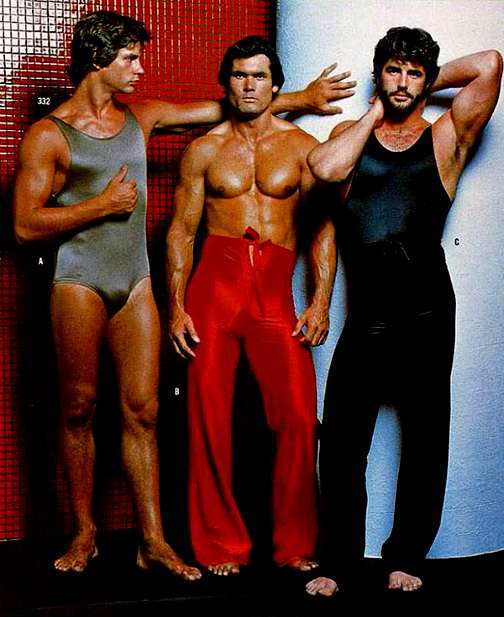 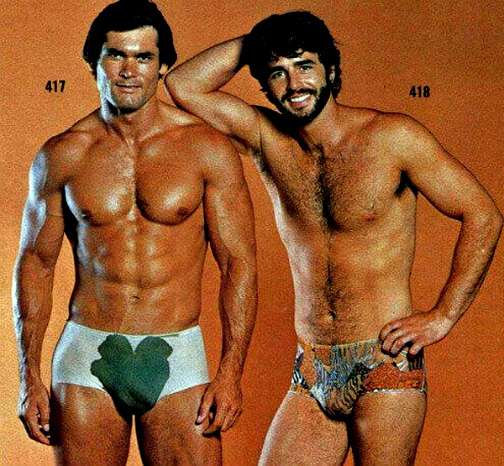 As for the following, I don’t know that there are words to properly convey what one feels about either the underwear or the model. Poor chap looks like he’s having a bad day. 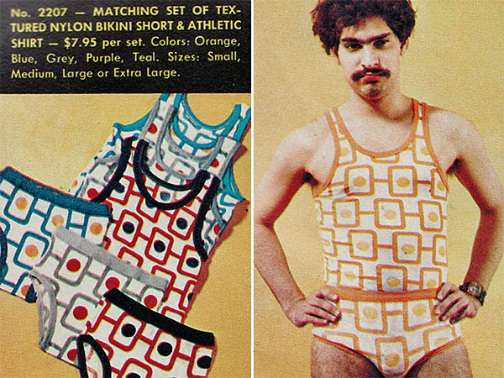 What liar sang ‘Things can only get better’? We finish with underwear for the posher among us and PLEASE, don’t show this to anyone from PETA. Yes – wearing a dead animal on your genitals is “an irresistible invitation to hard ‘n’ heavy action.”

David Beckham doing pushups in his underwear on a grand piano.