Some vintage ads contain unintended LGBTIQ undertones only discernible to the modern eye. However, others hide a subtext always intended for those with eyes to see.

Scroll down for the ads

J. C. Leyendecker, for example, designed some of the ads in this article. He designed numerous advertisements and over 400 magazine covers. He often used his life partner Charles  Beach as a model for his overtly homoerotic designs.

As such, many illustrators found inspiration in  Leyendecker’s work. Thus, he contributed to the unintentional homoerotic undertone so often discernible in American culture even in the days before ‘gay liberation’.

However, let’s start off with some of the camp and kitschy ads whose designers had no idea how amusing their work would one day seem.

Jester Wool sold wool, obviously, and also patterns for making knitted garments. They later expanded into rug kits. The kits included a pattern, the wool and everything else required to make a “superb, thick pile rug with a carpet finish.” The company, based in Leicester England, went into liquidation in the late 90s. Austin Reed Swimwear (perhaps) made the same mistake as Jester Wools and took ‘gay’ to only mean fun and colourful. However, by the imagery, we suspect someone at Austin Reed knew what the ad suggested. Sydney’s Pierwood Plastics Company produced Gayware canisters during the 50s. Later, the Nylex company bought their patterns and produced the canisters for a while. The canisters remain a popular collector’s item. 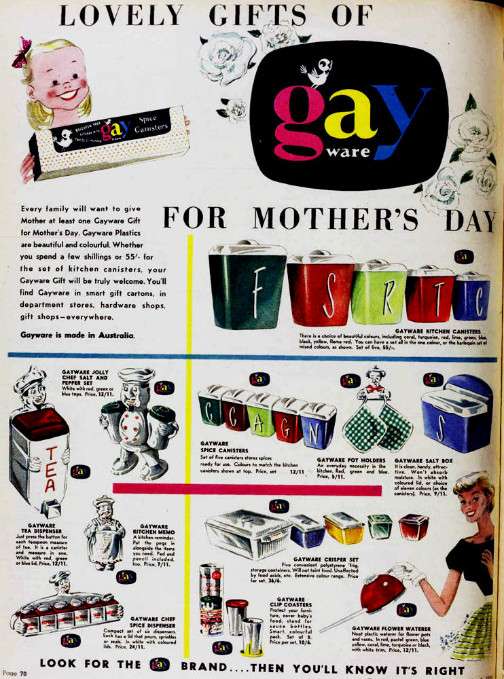 Jell-O is the Gay Dessert 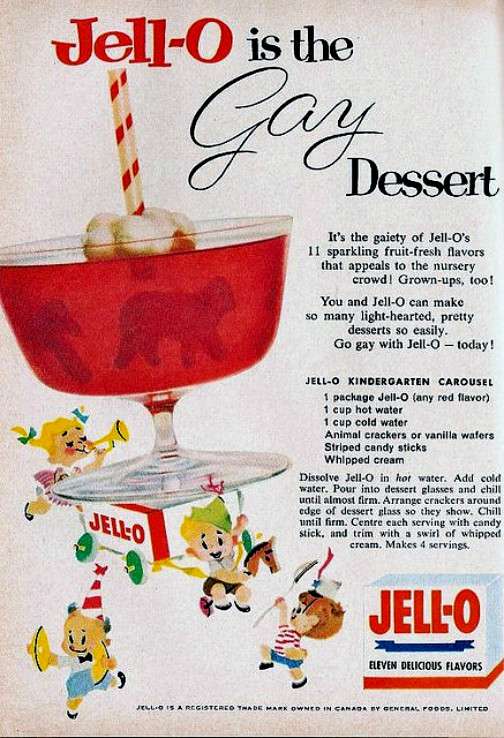 Yes, Jell-o is perhaps the gay dessert, but to wake up gay in the morning, you need Ovaltine, plain or chocolate flavoured.

Speaking of mornings, WTF was this ad attempting to convey?

Admittedly, very little gay subtext there, but we couldn’t resist including – the banana near the crutch and the machete. What’s that all about?

The miserable old wowser who popularised corn flakes abhorred sex. So much so he spent his honeymoon writing a book advocating abstinence.

Nothing works so well for that as a machete we suspect. 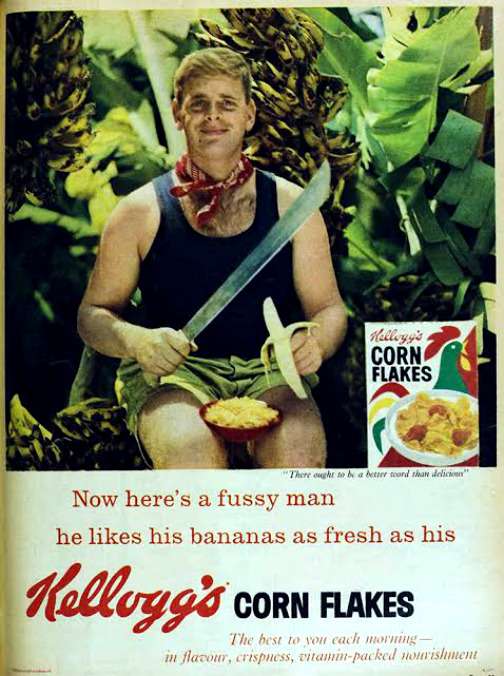 The aforementioned J. C. Leyendecker designed ads that often included either men looking wistfully at each other or guys just being guys together – naked.

Check out the wistful gaze of the young man in this ad for Kuppenheimer suits. In an ad for Cannon Towels, J.C. played about with some college frolics – looks like hazing to our eye. It would land the subjects in court today. 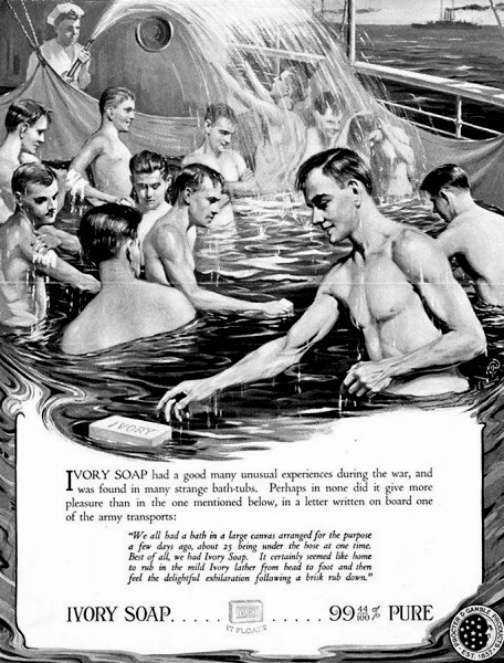 Bradley Group Showers seem to have unintentionally gone down the same route with their ad designed to sell their plumbing systems to colleges and sporting teams. 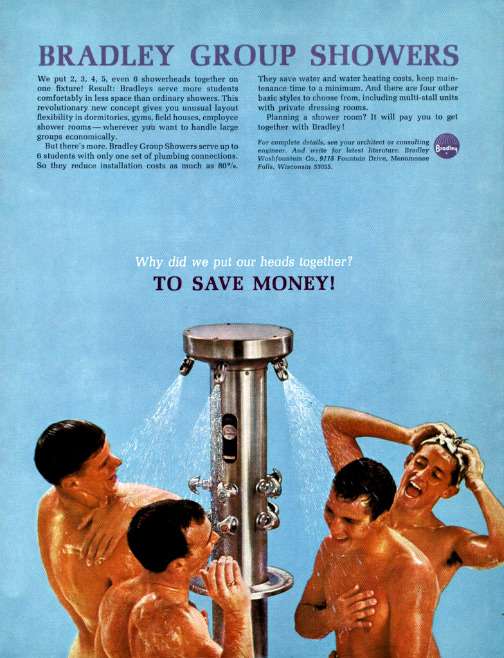 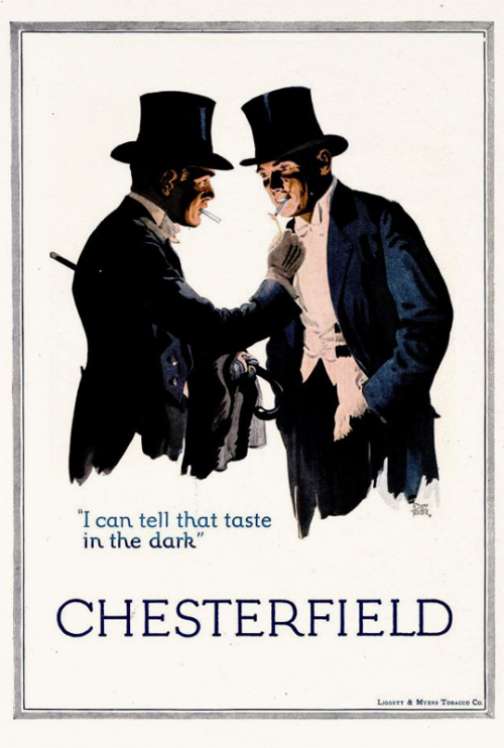 I’ll bet he can. But that ad has nothing on boldness compared to the following. I wonder if the booklet remains available? We all want more pay. Finally, another couple of those ‘guys being guys’ type ads.

In the first, if you listen closely you can hear the dude saying, “It was this big, I swear.” And this dude demoralised his friend by claiming he needed binoculars to find it. 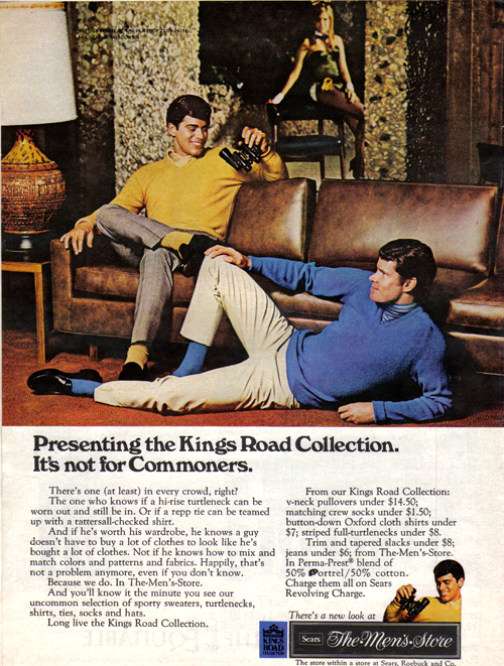 But let’s finish with something uplifting – surely this ad portrays a same-sex married couple in the kitchen together back in the good old days. 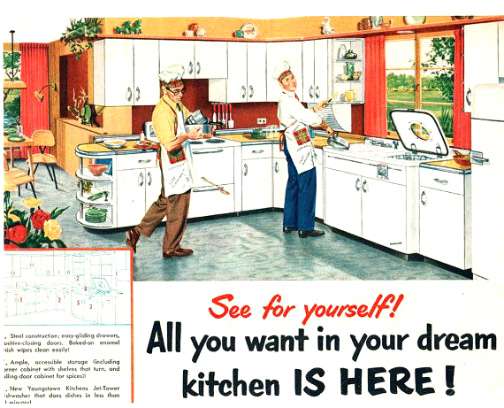