The council raised the pink, white and blue flags on Friday, November 19, for Transgender Awareness Week. The community gathered for a Transgender Day of Remembrance ceremony the next day.

But on Saturday, a vandal had stained the flags with black paint or ink. Hobart Lord Mayor Anna Reynolds called the vandalism “appalling”.

“The raising of the transgender flag on Town Hall during Transgender Awareness Week is one way that we show our support for the Hobart trans and gender-diverse community,” she said.

“We will be replacing the flags and flying them again as soon as we can,” she said. 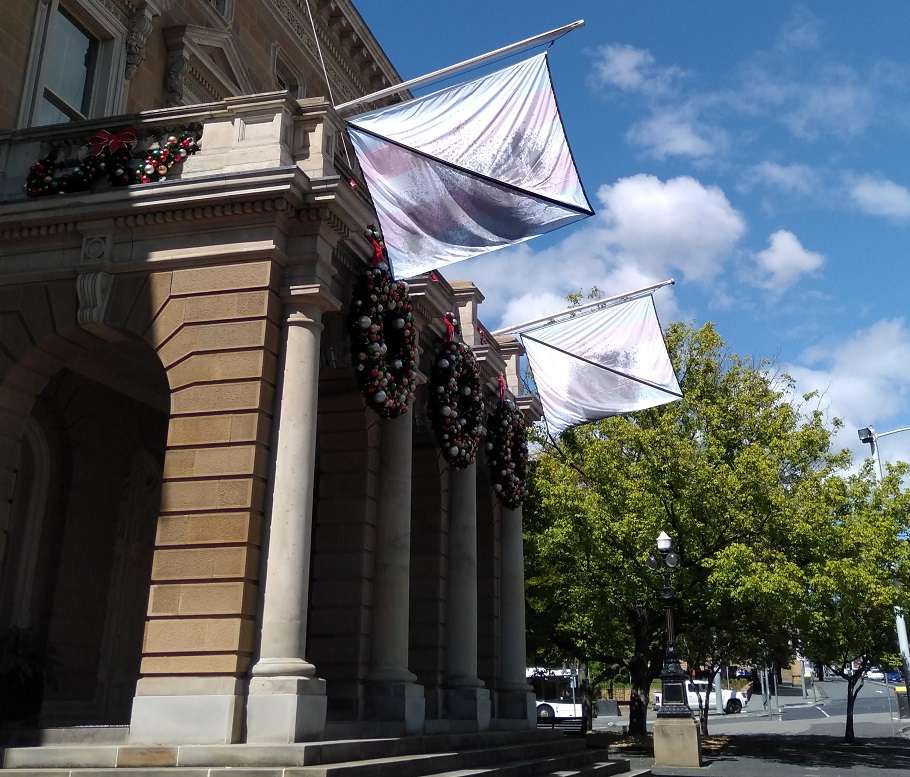 Transgender pride flag vandalism is a reminder of ‘stigma and hate’

“The desecration of our pride flag… is a reminder for us of the stigma and hate that trans and gender-diverse Tasmanians still experience today,” she said.

“Somebody saw a symbol of kindness, tolerance and pride being flown in our city and wanted to destroy it. [It] should really scare us.

“I don’t think that’s Hobart. I don’t think it’s Tasmania. But it is a conflict that’s happening and we need to pay attention to it.”

Endelmanis added, “The transgender community came together and read out the names of the trans and gender-diverse people whose lives have been lost over the past 12 months to violence, fear and hatred across the world.

“All we did was speak out the names, the ages and locations of people who have died over the last 12 months. It still took 25 minutes.”

Hobart first flew the transgender pride flag on the Town Hall in the the capital city earlier this year to mark the Transgender Day of Visibility.

Last week, LGBTIQ advocates cheered the raising of a rainbow flag in Ulverstone, thirty years after the anti-decriminalisation protests gave the Tasmania town the title of Australia’s “most homophobic”.