A Republican politician from Ohio is facing calls to resign after blaming gay and transgender people for the latest mass shootings in the US.

Candice Keller is a Republican state representative from Ohio. She took to her personal Facebook page to write the vile, now-deleted rant, circulated widely online.

“After every mass shooting, the liberals start the blame game,” Keller wrote, before launching into the blame game herself in the lengthy tirade.

Citing the “breakdown of the traditional American family,” Keller blamed “transgender, homosexual marriage, and drag queen advocates” and also “the culture, which totally ignores the importance of God and the church.”

She also blames “the ignoring of video games”, legal marijuana, and “disrespect to law enforcement”, which she blames President Barack Obama for.

After listing numerous other subjects, Keller asks: “Did I forget anybody?” 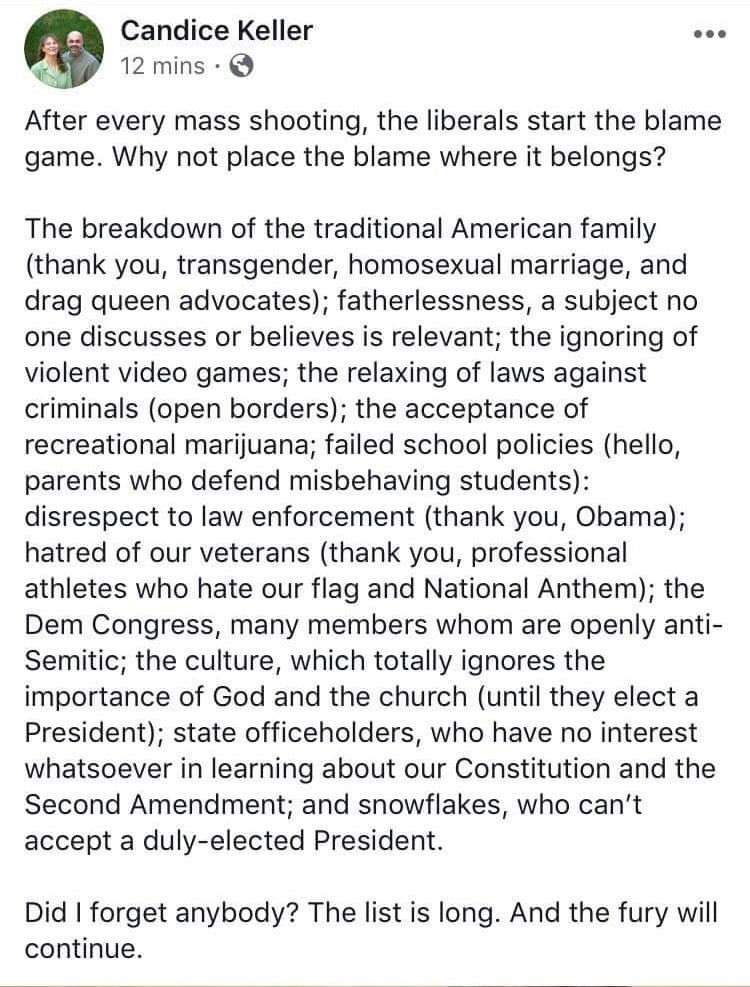 Ohio State Representative Candice Keller is a world-class SH*TGIBBON. We have Drag Queens, “homosexual marriage” and trans people here in the UK. ZERO mass shootings in 2019 compared to 251 in the USA. Bye Felicia! pic.twitter.com/GYIA5OdwVl

Oh, Candice Keller, you have poked the wrong queen.

After the post emerged, Butler County Democratic Party chairperson Brian Hester said Keller was an “embarrassment” to her party.

“She loves to fan the flames and play the role of victim here. Not the nine people who were killed,” Hester said.

“She’s fundamentally unfit for office. She is an embarrassment to her party, to conservatives, to Butler County and to the state Legislature.”

“While our nation was in utter shock over [the shootings], Republican State Representative Candice Keller took to social media to state why she thought these acts were happening,” Timken said.

Keeping up with the Kalifornians: Caitlyn for California