Two more local legends have been inducted into the Sportsman Hotel’s Drag Hall of Fame for their contributions to the local drag scene.

Sporties showgirl Yana Michelle and producer and choreographer Gavin Anthony (both pictured) were named as the next two Hall of Fame inductees at a special ceremony on Sunday night.

Anthony first performed at the 27th annual Queen’s Ball in 1987 and since then he’s produced, directed, choreographed, and starred in numerous shows at Sporties and other Queensland venues.

“This is such an honour, and it’s wonderful to be among such illustrious company,” Anthony said.

“Most of what I do is behind the scenes so by the time the show opens most of my work is done.

“I want to say a collective thank you to the many incredible performers that I’ve had the privilege of working with over the last 25-odd years. I couldn’t do what I do if you didn’t do what you do.”

Anthony said he wanted to dedicate the honour to longtime friend and collaborator Hazel LaBelle.

“Hazel wanted to be here tonight, but unfortunately she suffered a stroke at the end of December and is in recovery,” he said.

“I dragged Hazel out of semi-retirement back in the late 90s. She whinged for months that she didn’t want to do it but I kept harassing her and she went on to become one of my key cast members for three or four years. I want to dedicate this honour to Hazel.”

The second Hall of Fame inductee, Yana Michelle, started her career in Brisbane at the Sportsman Hotel in 1993 and since then has performed all over Australia and internationally.

“I started here over 25 years ago and I’m so proud to be part of the Sportsman family,” Michelle said.

“I came to Brisbane from Adelaide where I’d worked at Mars Bar as a resident, two or three nights a week. 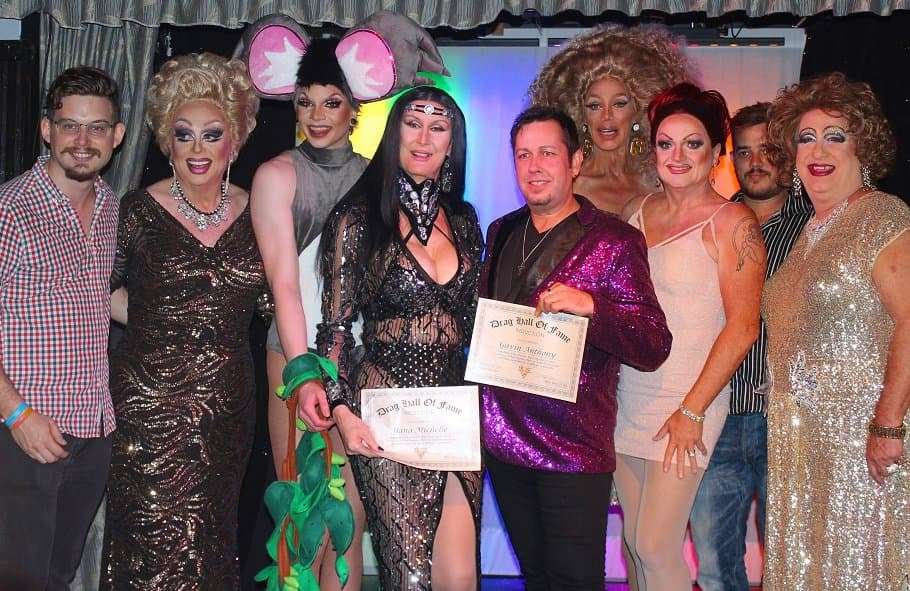 “I want to thank [Sportsman Hotel owner] Neil McLucas. When I came here and I first went into Sporties, Neil came up to me and said ‘Do you do shows?’ and I told him ‘Only if I’m forced to!’

“The Sporties stage was about half of what it is now. When I would walk through the audience, we had to get the Dolphin torch out because we had no spotlight.

“I annoyed Neil until he built this stage right here and since then it’s had so many fabulous shows performed on it.”

Michelle said she was proud to be a transgender showgirl and she said trans performers had contributed a lot to the Queensland entertainment scene.

“There aren’t many trans female showgirls around, we’re very unique and I’m one of the only ones left. We tend to get overlooked,” she said.

“We’ve always been part of this community and I love my drag sisters so much.”

All of the members of the Drag Hall of Fame are immortalised on the wall of the Lounge Bar at Sporties, recognising their contribution to Queensland drag, performing arts and charity fundraising.

Miss Synthetique, who hosted this year’s induction ceremony with Gayleen Tuckwood, said the Hall of Fame was started to recognise the “tireless efforts of drag performers in Brisbane who are part of our community’s history and have shaped the community itself.”

“We have some amazing talents here in Brisbane and sometimes they get overlooked with RuPaul’s Drag Race queens running around,” she said.

“You have to support your local drag queens and drag shows to keep our local culture alive.”