The Sportsman Hotel has inducted three more local legends into its Drag Hall of Fame.

Each year, the Brisbane venue honours a new group of performers for their contributions to both Queensland’s drag scene and the LGBTIQ+ community.

And at a special induction ceremony for 2022 on Saturday, the three entertainers were immortalised at the venue.

Drag stars Iona Toyboy and Sasha Trajik-Mole (pictured above, left and centre) were honoured, as was legendary Queensland entertainer and activist Toye de Wilde (above right).

Host Wanda D’Parke paid tribute to entertainer and activist Toye de Wilde’s “amazing life both on and off the stage.”

“And it has always been a life led on her own terms,” she said.

“She was instrumental in opening many of our bars of that era. She always supported the showgirls coming through.”

A talented singer, Toye de Wilde performed across Brisbane, as well as during a stint with Les Girls in Sydney.

She was one of Australia’s first trans entertainers to use her own voice.

Wanda D’Parke recalled that Toye (pictured below) gave her one of her first big gigs in the 1990s.

“Her door was always open, not only for performers but also for community members,” Wanda said. 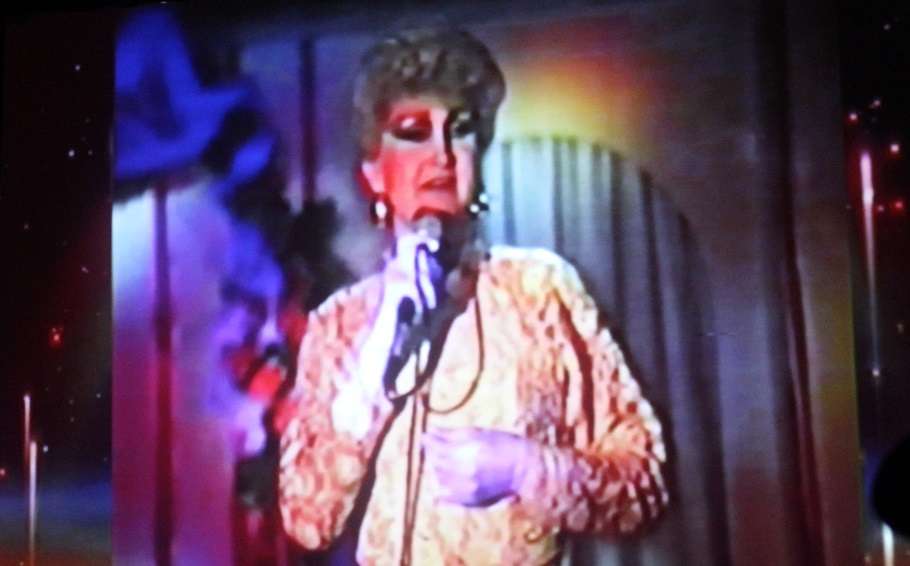 Longtime friend Bill Rutkin (below left) said Toye was “born to be an entertainer” but her legacy also includes decades of activism.

“Toye was an innovator not just in her amazing shows, but also social innovation in the 60s, 70s and 80s,” he said.

“She was active on the scene for over 40 years, and was one of our state’s great leaders.”

“Toye had a role in the founding of almost all the institutions we had, including the Camp Club and the Queens Ball,” he said.

“She was the Agony Aunt, the social worker, for our community. For people without a home, who needed a lawyer, or needed healthcare or employment.

“She was always there, and always knew someone who could help.” 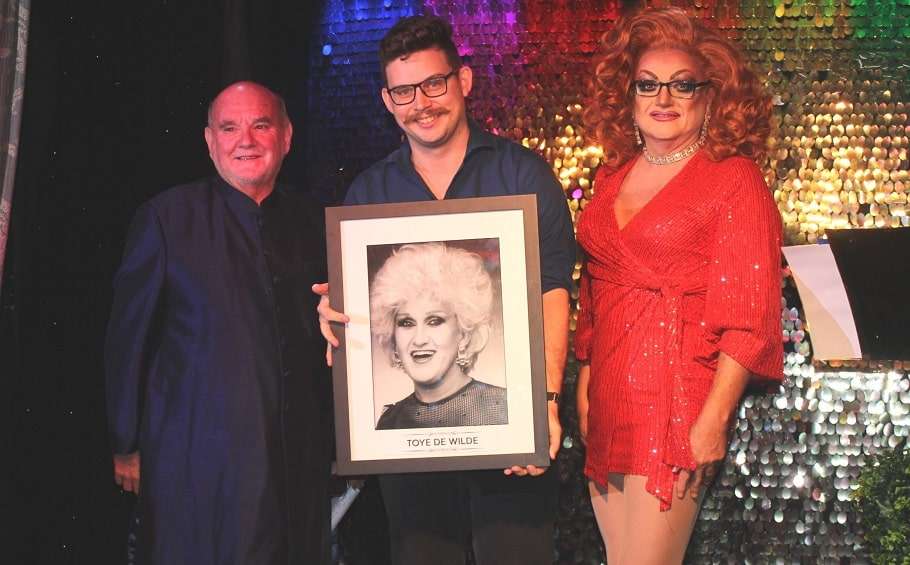 ‘Always be aware of what we have achieved’

Toye de Wilde, who sadly couldn’t attend the induction ceremony, thanked the Sportsman Hotel for the Hall of Fame honour.

“Being nearly 80 years old and Covid don’t go well together,” Toye explained in a message.

“As I write this, I feel I’m writing my obituary but I hope I’m not, as I’m still alive and kicking.

“I thank the thousands who’ve helped me to get here, the community groups and the strength from our pride.

“Pride in our personal being and pride in our community, who worked and suffered and died to bring the LGBTI community to where it is today.

“But this comes with a warning, from we the past, to you the future. Always be aware of what we have achieved, because we are political targets.

“The Christian lobby group will keep attacking any chance they can.

“History shows us that all we have can be taken from us by politicians at the stroke of a pen. It has been this way for thousands of years.

“God love you all. Keep the rainbow in your heart as I have in mine and thank you for this honour.”

Iona entered the Miss Sportsman Hotel competition to support friend Jada Pinkbits, but it was to be the start of her two-decade drag career.

“She was crowned Miss Sportsman Hotel 2004 and has performed across Brisbane, Maryborough, the Gold Coast, Sydney and Canberra,” Wanda explained.

“Iona has worked with nearly all of the other Hall of Famers, plus many others.

“But she’s best known for her amazing production shows with her close friends Sasha Trajik-Mole and Ella Va’lay.” 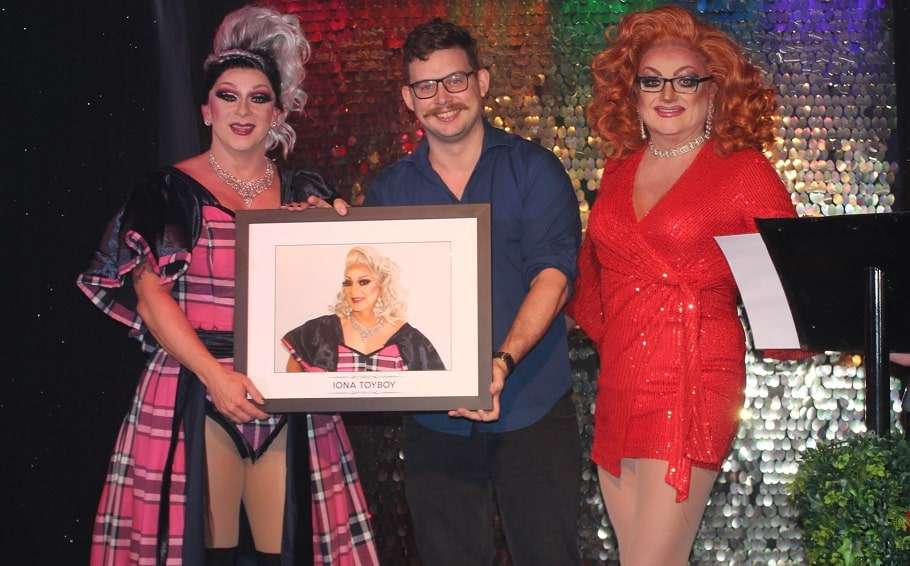 Iona Toyboy thanked the Sportsman Hotel for the “incredible honour”.

“The people who came before me are legends. I’m so honoured to be included in that list, I love you all,” Iona said.

“Drag has been so much fun. For nearly 20 years, I’ve had the pleasure of being on stage here and around the world.

“Drag allows me to be creative and let my hair down. I can be somebody different to who Jason is in the day-to-day, 9-to-5.”

Wanda D’Parke said it was in 1997 when Sasha Trajik-Mole entered and won a drag competition in Fortitude Valley.

“He noticed her obvious talent and drinking ability and invited her to work at the Sportsman Hotel.”

Sasha Trajik-Mole has performed for 25-years and last year returned to the Sporties stage. The performer names Mandy Moobs and Vollie Lavont as her drag daughters. 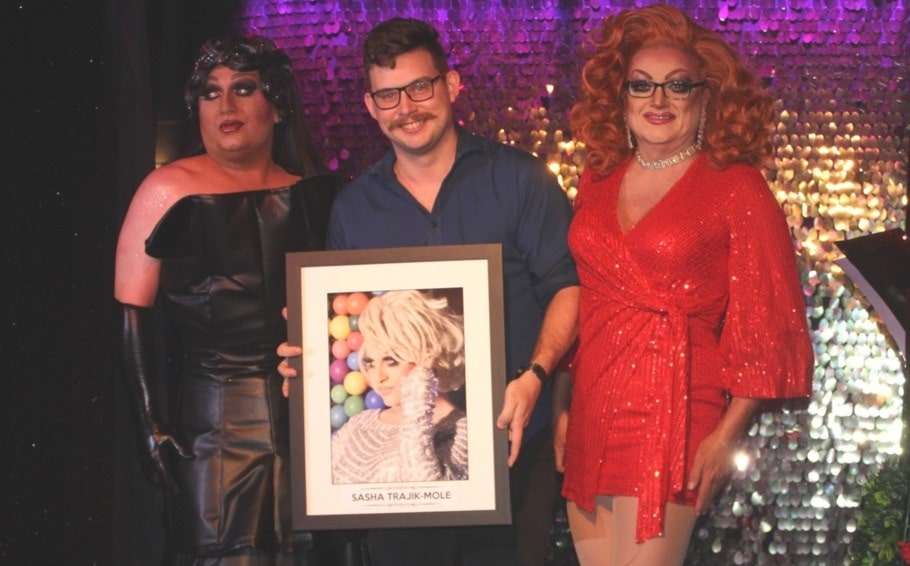 Wanda said of Sasha, “I’ve been lucky enough to work with her numerous times, and she’s a professional through and through.

“She works incredibly hard to present an amazing show every time, bringing her talent and razor-sharp wit to the stage.”

Sasha thanked Sporties for the Hall of Fame honour, and said former manager Paul Kratzmann “saw something in me, in my $8 wig from the ekka and $4 dress from St Vinnie’s.”

“I want to thank everyone here for supporting me, Iona and Toye, and all of us,” she said.

List of legends in Sportsman Hotel Drag Hall of Fame

She said the annual Drag Hall of Fame was created in 2017 to recognise and acknowledge the achievements of the drag entertainers.

“It’s not a competition, nor is it something that you apply for,” she said.

“The inductees are chosen in recognition of their contribution to the craft of drag and the drag scene, as well as the community, charity work and activism.”

The Sportsman Hotel immortalises each member of the Drag Hall of Fame on the Lounge Bar wall.

In late 2019, the Sportsman Hotel then inducted drag star Candy Surprise. Performers Malika and and Ella Va’lay followed in January 2020.