An Aussie dad with a gay son has given his shiny blue ute a marriage equality makeover before he takes it on a road trip.

Geoff Thomas is a retired plumber and dad of two and he explained to BuzzFeed he “grew up homophobic” before his son Nathan came out to him 12 years ago.

“I spent nine years in the army, I’m a Vietnam veteran. I was a plumbing contractor,” he said.

“And conditioned to be homophobic, and then one day my son comes out to me. I had to ask myself the question – what is it about gays that I didn’t like? After that, I decided it was unfounded fear, ignorance and prejudice.

“I came to the view that my son wasn’t equal in law and that really got up my nose, so I became a very strong advocate for marriage equality. 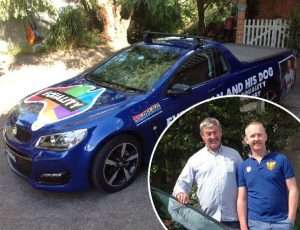 “In the 12 years I’ve been advocating for this, I’m yet to hear a reasonable argument against it.”

Two weeks ago, Geoff purchased pro-equality slogans and logos to decorate his ute with, including a large rainbow Equality Campaign logo for the bonnet.

“I’d had this talk with some people and I said, ‘Every man and his dog supports marriage equality’. And I thought, I’ll put that on my ute!” he told Buzzfeed.

Later this month, Geoff is taking the ute on a road trip from Sydney to Melbourne and back again, visiting 20 towns to talk to people about marriage equality.

Why We Have Yet To See An Openly Gay AFL Player?