Two lesbian penguin couples have gotten together at London’s Sea Life aquarium as the species’ mating season gets underway.

Gentoo penguins are monogamous and mate for life, and same-sex pairings are not uncommon both in captivity and in the wild.

At Sea Life London, two couples – Marmalade and Chickpea and Marama and Rocky – have courted each other by bringing pebbles to each other as gifts, the aquarium says.

It’s the birds’ mating ritual for potential mates. The couple will later use the stones to build their nests and incubate their eggs.

Sea Life manager Catherine Pritchard said, “Without a doubt, our Gentoo penguins are one of our most loved creatures.

“We’re so pleased that we’re able to reopen our doors in time for guests to be able to witness their amazing courtship rituals.

“Gentoo penguins are the ultimate romantics, and their dating techniques are truly unique.

“So much so that as humans, we could certainly learn a thing or two from their passion and commitment to finding a mate.

“As well as our male-female penguin couples, this breeding season we also have two female same-sex couples who are also going through their nesting rituals.”

The aquarium is celebrating its reopening to the public on May 17 as UK coronavirus restrictions ease. 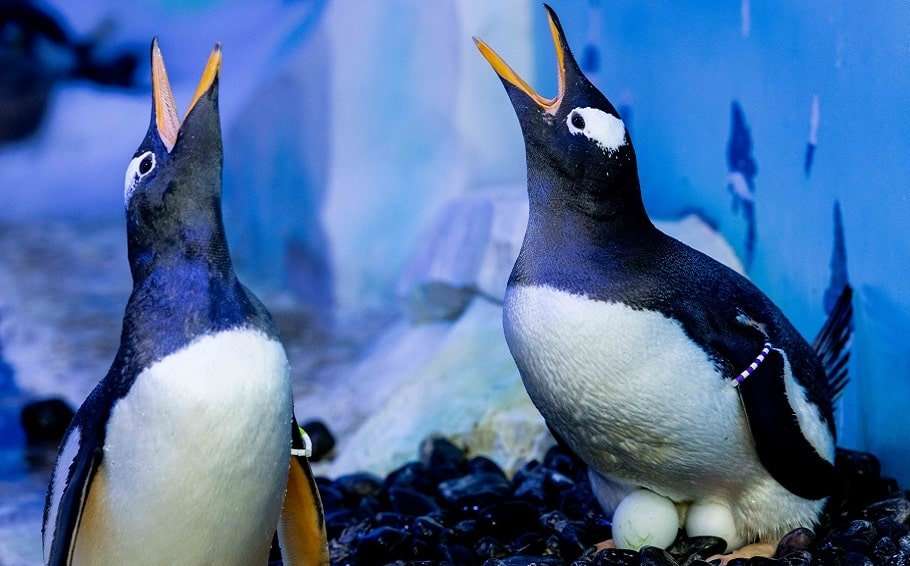 Aquarium staff say they’re keeping a close eye on the penguins, weighing them and assessing their nests.

“We’re hoping that we’re lucky enough to add a new chick to the colony when we welcome guests back.”

Lesbian penguins Marmalade and Chickpea are a new couple

At the Sea Life aquarium in London, Marmalade and Chickpea are a new couple, staff said. But Marama and Rocky are still together after raising their first chick together a few years ago.

Female gentoo penguins typically produce two eggs, but can often only hatch and care for one.

Many male same-sex penguin pairs have fostered abandoned eggs from others in the aquarium colonies.

The hatchlings grow fast, staying in the nest for up to a month. In all the couples, both parents alternate the caring and foraging duties.

The same-sex pair made headlines in 2018 after they successfully hatched and raised a chick – a baby girl named Lara.

Last November they became doting dads to their second newborn chick during their aquarium’s breeding season.