There are now prophylactics for almost every taste. The wacky world of condoms includes a variety of unexpected flavours. Strangely though, not one single manufacturer of the protective love glove offers a penis-flavoured version.

For millennia, supplicants to the phallic divinity knelt in awe before their rigid diety. Due to the lack of peer-reviewed research on the subject, we must rely on anecdotal evidence regarding their taste preferences. However, the scant records available suggest very few oral devotees ever thought, “Gee, I wish whangs came in a dazzling variety of flavours.”

It seems, for the most part, even the most discerning palates were content with an all-natural flavoured schlong.

The history of condoms

No parchment or scroll exists to definitively prove the use of condoms in the ancient world. There are vague references from the Middle Ages of men soaking their members in onion juice as a contraceptive measure. That no doubt brought a tear to someone’s eye. But no historical source indicates anyone ever encountered a bloke soaking his parsnip in onion juice and suggested a tastier alternative.

“Hey, why don’t ya crack a few vanilla beans on the knob instead?”

Speaking of which, what is the go with vanilla flavoured condoms? Some purveyors of variety packs feel the need to throw a few vanilla frangers in among the more standard fruity offerings. But rarely do those things taste like the decadently-delicious milkshakes of our wasted youth. Where is the frothy freshness? The kilojoule-laden richness?

Vanilla flavoured condoms are as appetising as vanilla fridge wipes. If we wanted to taste that, we would not drop to our knees. We’d just go into a mad frenzy licking the egg holders while cleaning the cold box. No. That milkshake doesn’t bring any boys to the yard.

Men holstered their weapons within Gabriele’s sheaves. They secured the linen with a ribbon tied at the base of the penis. While it no doubt looked positively charming, one suspects the chemical impregnation left it tasting something like an anti-bacterial washcloth.

Ironically, considering the church’s later injunctions against condom use, Falloppio was a Catholic priest. But despite its modern-day refusal to condone condom use as a barrier against conception or infection, the Church of Rome’s opposition is relatively recent. The Catholic congregation ignored occasional mild papal injunctions against contraception until 1930 when Pius XI denounced anything that inhibited conception as ‘inherently evil’. Of course, ‘inherently evil’ is the automatic go-to when ostensibly celibate experts on all things sexual find themselves without a third leg to stand on.

Although Falloppio was the first to turn his scientific genius to the search for an effective penile protective, his invention proved as practical as the Penny-Farthing bicycle. You don’t see too many of them on bike lanes of late, nor many men with chemically impregnated linen sheaths tied to their todgers at swinger’s parties or saunas. Linen is not noted for its elasticity, while the organ Falloppio intended to shield is known for its ability to expand. The linen sheath was okay for showers but disastrous for growers.

And even during the Renaissance, most men still saw needlework as women’s work. So seamstresses across Italy suddenly found extra employment stitching linen sheaths for syphilitic cardinals. Previously, most of their income derived from embroidering ornate church vestments for men of the cloth. Work like that took months but an experienced needlewoman could pump out a few Fallopian sheaves an hour. Occasionally, randy bishops commissioned a customised sheath designed to match their ritual raiments.

“But Your Most Reverend Excellency, I thought you were celibate?”

“Of course, my child. The sheath is mere decoration. Simply decor.

“If you have some spare time, could you embroider a likeness of St Sebastian on the shaft? ”

In addition to linen sheaths, archeological evidence indicates people also began to use condoms made from animal bladders. That discovery led to a re-examination of various paintings of the Old Masters previously thought to show men engaged in unnatural romantic relationships with goats. Scholars now speculate the subjects of those paintings were just idiots who failed to read the instructions. They didn’t know to unwrap the goat from the bladder before placing it on the penis. Dickheads!

And speaking of dickheads, the next advance in prophylactic technology involved a condom that covered only the knob. Because of that, the vulcanised rubber boner hood required fitting. Luckily, it was reusable, considering the expense of custom-fitting a tailor-made knobjob. Entrepreneurial doctors offered specialised fitting services and spent their days retracting foreskins with forceps or tweezers — as the case may be — to measure the glans for a rubber raincoat.

The Wacky World of the Modern Prophylactic

These days, we enjoy the luxury of form-fitting condoms in all shapes, sizes, colours and flavours. Generally manufactured from latex, most men can purchase a pecker-perfect franger off-the-shelf and ready to wear.

Though, for many, size does still count. Insecure men insist on buying condoms larger than they need. They choose condoms to fit their egos, not their dicks. There is a reason scientific surveys of penis size result in greater average lengths when self-measurement is involved. So condom manufacturers squander oceans of tree sap producing condoms in sizes surplus to most user’s requirements.

This writer once worked in an adult shop. Oh lordy me. The number of men who can’t ask for a packet of condoms without informing the sales assistant that they can never find a brand quite large enough.

I yearned to tell the truth. To yell across the counter!

“FFS, how many YouTube clowns stretching condoms over their heads does it take before you admit the bloody things will fit everything from a chipmunk to an elephant.”

If we had indeed given a flying f*** for our customers, we would have included a free penis enlarger with every pack of Extra Large.

The Condometric – it is a wacky world

One company thought to cash in on the need to measure and in 2008 introduced the Condometric – the measuring stick condom.

The pitch to investors was a beauty.

“Consumers look for economically efficient items. Products with multiple uses will logically prove more successful than those that only perform one task.”

Yeah right. That’s why you can no longer purchase the product. Imagine pulling out a Condometric on an unsuspecting Grindr hook-up whose profile read simply ‘HUGE!!!’.

“Well, whip it out and whack this Condometric on it. ”

It’s one of the great disappointments of this writer’s life that eight inches is no longer what it was when I went to school.

It seems that for most wearers of Extra Large, it’s a case of ‘content may settle in transit’.

But, in truth, I never got the size thing. I always had very democratic taste in penises. I like them in all their various sizes, shapes, colours and infinite other varieties. And before my readers jump to any hasty conclusions, remember that slut-shaming is just wrong. (Except when I’m doing the shaming.)

Durex, a few years ago, even announced an Eggplant flavoured condom. But it turned out to be a hoax, allegedly well-intentioned, but a hoax. The company claimed they wanted to inspire a condom emoji to prompt young people to talk about safe sex. Good luck with that! Sounds like the sort of promotion that comes out of a government department, determined to change behaviour for the better while ignoring reality. All those safe sex messages blissfully overlooking the fact that very few people will actually use condoms for oral.

But if you wish to, why not try the incredible Bacon Condom, which “Makes your meat, look like meat” and supposedly taste like meat, courtesy of a flavoured lube additive.

Well, you can’t actually try it at the moment. It’s out of stock. One suspects it was a limited run marketing gimmick by J&D Foods. The company boasts on their homepage of 2 billion press impressions since 2007. Bastards. QNews may consider releasing a gimmick condom.

Anyway, if you want to savour a bacon-flavoured penis, there is an obvious, if tasteless, solution. But I won’t boar you with that. Just go and take a toke on a cannabis condom. I didn’t bother trialling the wacky baccy condom, but if other flavours are anything to go on, it will taste like old bong water. 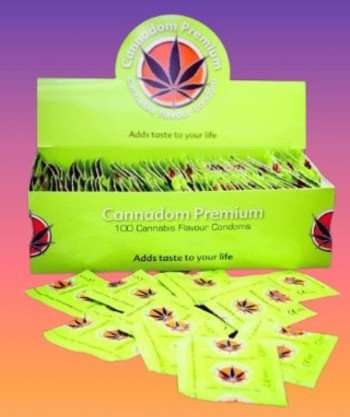 Ins and outs of sex: out with negativity, in with pleasure

Nothing says Women’s Network like a big purple dick

4 other jabs to get once you’re vaccinated for COVID

Doc Q: 5 Myths about STIs that doctors see every day

Family Feud: an activity that brings men closer together