RuPaul and Michelle Visage announce ‘RuPaul’s Drag Race Down Under’

Coronavirus is sweeping the nation. So far as a preventative, the Australian government has forced the closures of non-essential businesses around the country.

Many of those businesses though are safe spaces for the LGBTIQ community.

They include bars, pubs and clubs; meeting places for our community to feel accepted and supported like Brisbane’s Sporties and the Beat.

But some of the worst-hit are the drag queens who perform regularly at such venues.

Because these closures mean many of them are out of a job.

Brisbane’s very own Vollie LaVont is one of those drag queens.

She said being unable to perform and host, as she has done for years now, has affected her livelihood.

Vollie also said she relies heavily on her income as a drag queen to survive.

But many queens don’t work as frequently in drag as Vollie and some even have day jobs.

Now with even tighter restrictions on businesses, however, many of them are facing unemployment.

That’s been the case for Hovanna Crown who said her casual day job has been declared non-essential.

“Work closed earlier this week and as a casual, I won’t be getting paid.”

Chocolate Boxx, another Brisbane queen, said these closures have impacted almost all of her income. 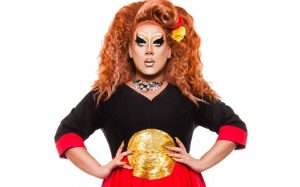 “It’s a very scary time for anyone in the nightlife scene.

“The best thing we can do at the moment is to check in on each other and help when we can.”

While the future is in limbo, Vollie is doing what she always does and is remaining optimistic.

And she’s doing it the only way she knows how — putting on a damn good show.

The award-winning drag queen is using social media to bring the community together during isolation.

She’s coined the term Vollie and Friends and it’s essentially a live web series on Instagram.

Its aim is to bring drag to you and since everyone is in isolation, what better time to do it?

Basically, Vollie broadcasts live from her living room with a couple of friends

Together everyone parties and has a big ol’ kiki.

Bowled Over, a dragumentary trip down a very (f)rocky road