Residents in south Hobart in Tasmania have repainted the city’s rainbow-coloured “Love Is Love” Bridge, and now hope it will serve as a permanent tribute to same-sex marriage.

Locals first painted the bridge over Sandy Bay Rivulet in rainbow during the same-sex marriage postal survey in 2017. However, council workers later removed the rainbow colours.

But late last week, a group of locals repainted the bridge and it now greets commuters.

A sign posted at both ends of the bridge tells the story behind Hobart’s “Love Is Love” Bridge.

“A group of Tasmanians in favour of marriage equality demonstrated their support by painting the railings of a local bridge in rainbow colours,” the sign reads.

“The rainbow painted bridge was appreciated by local community members and was a positive public affirmation of everyone’s right to love the person of their choice.

“Unfortunately, they were stopped just before they were able to complete their artwork.

“But [they] faced such a snaggle of red tape and bureaucracy that they felt compelled to take matters into their own hands.”

The locals say the bridge “brightens a dark corner” of Hobart’s south. It also “makes use of the symbolism of bridges, which overcome obstacles to unite those who cross them”. 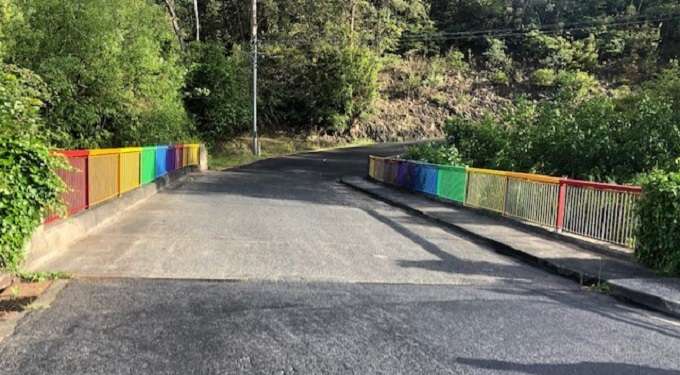 The bridge is in the electorate of Clark – previously named Denison – which returned a 74% “yes” vote for same-sex marriage.

Equality Tasmania spokesperson Rodney Croome said the bridge’s renewal serves as “an important reminder that the struggle for LGBTIQ equality is not over.”

“We still have a long way to go before we are a truly inclusive community,” he said.