Sydney’s new rainbow crossing at Taylor Square has been officially launched ahead of the 2019 Sydney Gay and Lesbian Mardi Gras.

Last June, it was announced the crossing’s return was announced after the original crossing was controversially removed overnight by the state government in 2013, citing safety concerns.

The new crossing, which curves around the corner of Campbell and Bourke Streets in the city’s LGBTIQ district in Darlinghurst, was officially opened on Friday morning by City of Sydney Lord Mayor Clover Moore, Sydney Gay and Lesbian Mardi Gras CEO Terese Casu and independent state MP Alex Greenwich.

“I know residents and visitors will love this colourful symbol of the City’s longstanding support for our LGBTIQ community,” Moore said.

“The City worked with Sydney Civil and State Government departments to bring the rainbow crossing back to Taylor Square.

“We believe this may also be the first rainbow crossing in the world that has been painted in a curving rainbow shape.” 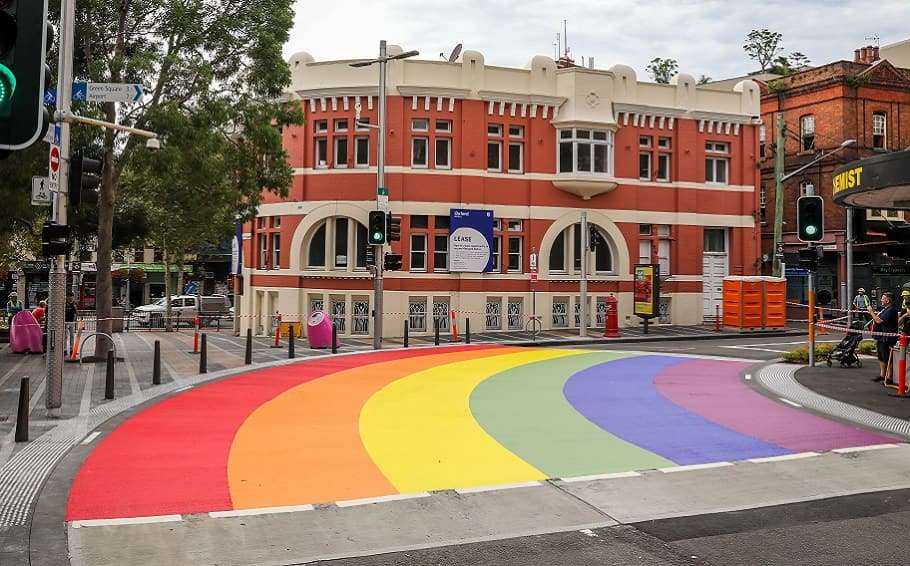 Clover Moore said San Francisco artist Gilbert Baker’s rainbow flag is both a symbol of pride in the city’s diversity and a symbol of the “first bloody struggles of the gay rights movement”.

“The 78ers in Australia put up with brutal treatment during the first Sydney Mardi Gras,” she said.

“The rainbow flag has come to represent the LGBTIQ community’s struggles for liberation, survival and equality.”

After the removal of the original crossing, Sydney man James Brechney founded the “DIY Rainbow” movement.

The group’s chalked crossings across the city went viral online. They inspired similar crossings chalked all over the world, including in Paris, South Africa, Thailand and Cambodia.

“The new rainbow crossing is a hugely symbolic statement of support for the LGBTIQ community after a tumultuous time with the marriage equality plebiscite.

“This beautiful gesture brings a smile to everyone who walks across it.

“It’s a great location for the curved rainbow – it’s as if Campbell and Bourke streets were made for it.”

Moore said the rainbow crossing and traffic lights have been upgraded to improve safety. The crossing is installed on an initial six-month trial basis.

After that, the fixture will be subject to an independent safety review, with a goal for the crossing to remain permanently.

All are invited to come along to the crossing’s location in Darlinghurst tomorrow (February 9) from 11am to celebrate the new installation. For more details visit the Facebook event here.

(Photos by Katherine Griffiths/City of Sydney)