Sydney’s lockout laws will be relaxed for one night for the Mardi Gras’ parade and party next month, the New South Wales government has announced.

Liquor and Racing Minister Paul Toole said this would allow revellers to continue to be admitted to venues around the Oxford Street area beyond the state’s usual 1.30am or 2am cutoff.

“[Mardi Gras is] an internationally renowned event that attracts visitors from all over the world and injects around $40 million into the NSW economy every year,” Toole said.

“Relaxing the requirements will give people more time to make their way to surrounding venues and events when the parade finishes.”

The parade on Saturday, March 3 is expected to attract hundreds of thousands people to Darlinghurst’s Oxford Street for the event’s historic 40th anniversary celebrations.

Venues in the exempt area will still need to stop serving alcohol at the usual time of 3am, or 3.30am for venues with love entertainment extensions.

“The city will come alive and this move allows businesses to take full advantage of the influx of the large crowds expected,” he said.

“It’s an important milestone for the LGBTI community and we trust everyone will have a safe evening celebration.”

Sydney councillor Christine Forster wrote to the state’s Premier Gladys Berejiklian last week calling for the laws to be relaxed for the event as a gesture of goodwill towards the LGBTIQ community.

“This is an important gesture of reconciliation given the deep hurt still felt by many LGBTIQ community members over the terrible events surrounding the first Mardi Gras in 1978,” Cr Forster told The Daily Telegraph.

“It is also particularly poignant given we are celebrating the historic passing of Australia’s same-sex marriage legislation last December.

“The Oxford Street area has never had the same problems with alcohol-fuelled street violence as Kings Cross, and I hope this exemption will serve as a trial for the safe winding back of lockout laws more broadly.” 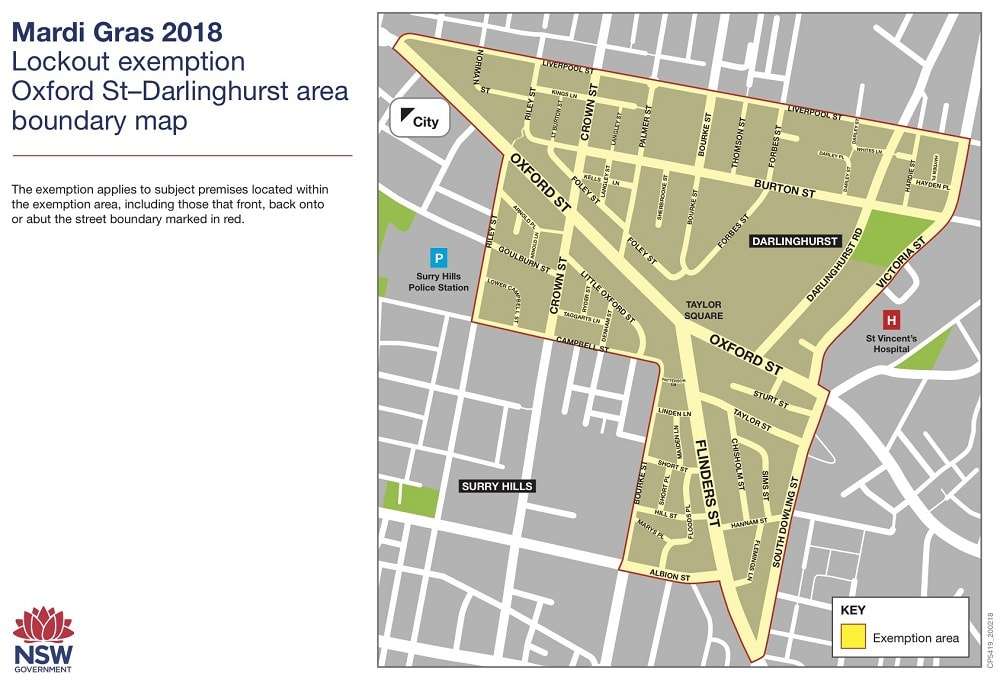