Prime Minister Scott Morrison introduced the contentious legislation to parliament last week. The federal parliament wrapped up for the year on Thursday, leaving the Bill in limbo before next year’s federal election.

CARR co-convener April Holcombe said the Religious Discrimination Bill will “wind back the clock on hard-won rights for LGBTI people and women.”

“We’re going to make sure they don’t get it.

“It’s appalling the Labor Party are refusing to oppose the bill and tacitly endorsing the call for ‘freedom’ for religious institutions to hire and fire as they like.

“Public opposition is crucial in piling on the pressure. [We must show] the right their attempts to weaken LGBTI rights will always fail.”

Prime Minister Scott Morrison has framed the Religious Discrimination Bill as “a shield, not a sword” for Australians of faith.

However LGBTIQ advocates and legal experts refute this. They warn the legislation would undermine existing protections and permit discrimination against LGBTIQ people, women, and various minority groups. 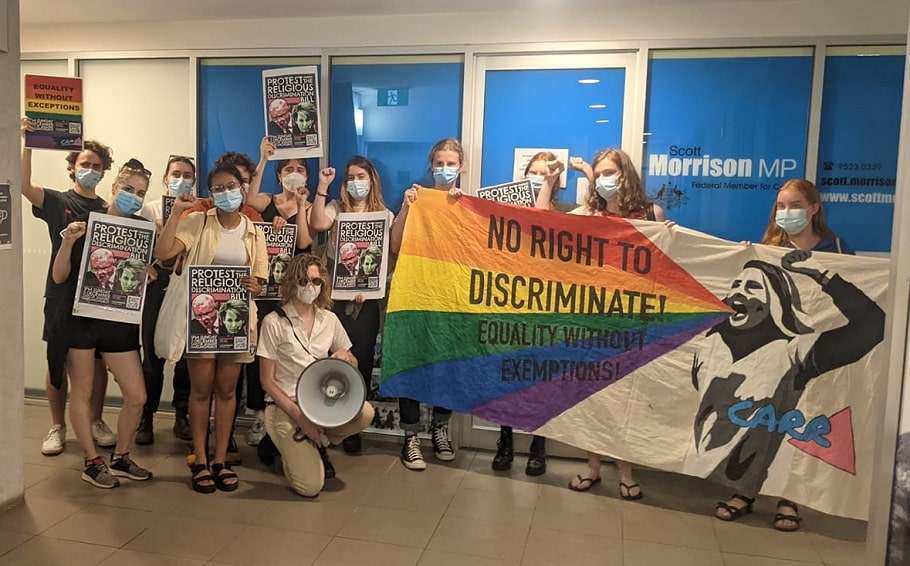 Federal Labor has also come under fire for not declaring a position on the Morrison Government’s latest draft.

On Friday, a group of CARR protesters marched through Cronulla waving banners and placards opposing the Religious Discrimination Bill.

The group took their message directly to Prime Minister Scott Morrison’s office (above) on Friday afternoon.

They announced plans for the rally outside Attorney-General Michaelia Cash’s offices in Perth on Friday afternoon.

“This bill will wind back the gains won by activists fighting for equality over decades,” Rainbow Rebellion WA said.

“[It] will give bigots the right to discriminate against women, LGBTI people and ethnic minorities.

“We need to take to take the fight to [Senator Cash] to stop this bill and show politicians ordinary people are against this discriminatory legislation.”