Designed by Maurice Goldberg and Matthew Aberline (both pictured), the artwork uses symbols to represent the five themes of repression, adversity, freedom, diversity and love.

The project represents historic Mardi Gras concepts such as public protest, joyous celebration, community activation and engagement and incorporates many colours and shapes to express that Mardi Gras is not a singular concept, but a mixture of diverse ideas, people, histories, politics and expressions.

“We were struggling to describe a singular image to describe the history of Mardi Gras,” Aberline said.

“It’s so varied, political, sexual, and the history of it is so complicated, so rather than trying to find a singular item, we decided to make a microcosm of what Mardi Gras is about – the good stuff, the bad stuff, and the celebration.

Goldberg said the art installation was nine metres tall at its highest point.

“That’s higher than a three-storey building. We want people to notice this – it’s a big, sassy, loud, undeniably in-your-face installation,” he said.

“At Mardi Gras in March, they were talking about the 40th anniversary of the festival, but the 24th of June is the actual date.

“It’s our day – it’s our Stonewall. This is the anniversary of a 40 year revolution that began in blood, in tears, and behind bars. It destroyed lives. 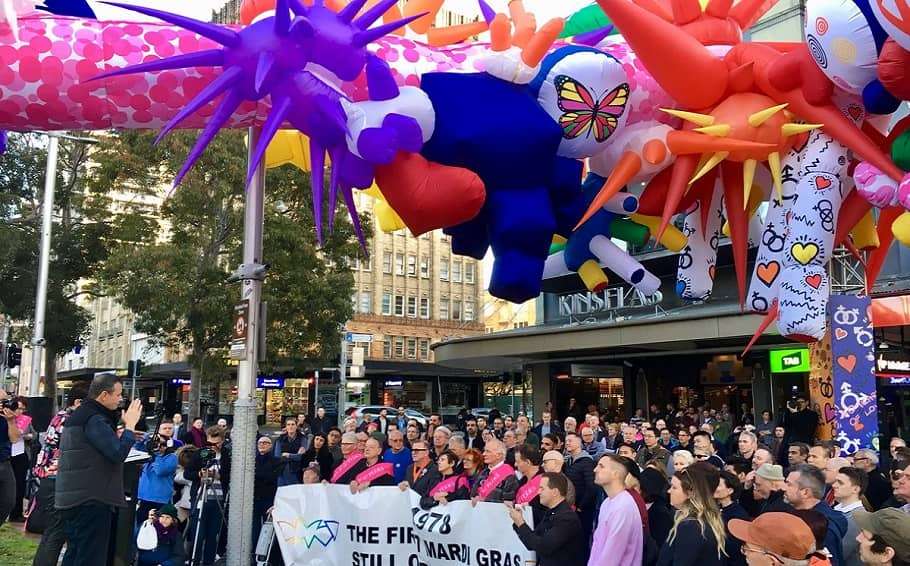 “Here we are 40 years on, with incredible liberty. We can’t understate it – this is so much more than a party. This is us putting our stake in the ground. Over 40 years the diverse LGBTQI community has come so far.

“The 24th of June 1978 was the beginning of in-your-face revolution. This is a time to think about the people who actually risked their lives in 1978, and the evolutionaries and revolutionaries over the last 40 years.

“The artists, the politicians, the social workers, the professionals, the drag queens, the trans people… I think it’s really important that we hold this day and remember it into the future.”

The 360-degree work transforms the space into a light-ﬁlled outdoor pavilion so visitors are invited to walk through and explore its’ various images and symbols from different perspectives.

“We not only pay respect to those that risked their lives for equality on that night and on nights since, but we also celebrate how the LBGTQI community has prevailed over the past 40 years,” Mardi Gras CEO Terese Casu said.

“Maurice and Matthew’s artwork is a magnificent representation of 40 years of evolution and love.”

The installation will remain on Taylor Square until September 1.