The City of Sydney has removed an advertisement for a queer concert depicting a Sydney church after the Catholic Archbishop blasted it as “upsetting” and “provocative”.

The council is running the month-long series of outdoor “Sunset Piazza” concerts in the St Mary’s Cathedral forecourt in Sydney.

As part of the series, event producers Heaps Gay are putting on Live N’ Queer this Saturday. They describe the event as a “chaotic queer variety show” featuring some of the year’s “loudest and queerest acts” in the forecourt.

An ad used by Heaps Gay to promote the show featured an illustration of the Cathedral.

But Sydney’s Catholic Archbishop Anthony Fisher blasted the “provocative” ad as insensitive to people of faith.

He explained to his Facebook followers the Cathedral Forecourt “is council land and not church property.”

“The decision about the content of the concert and its advertising is unfortunately not ours to make,” he said.

“It is frustrating and upsetting that St Mary’s Cathedral, the mother church of Australia, has been used so provocatively to promote this event and such little sensitivity shown to people of faith.

“We need to pray to ask the Lord that in our great and ‘tolerant’ city of Sydney, that religious belief will be respected and protected and that we will all rediscover an appreciation for what is sacred.” 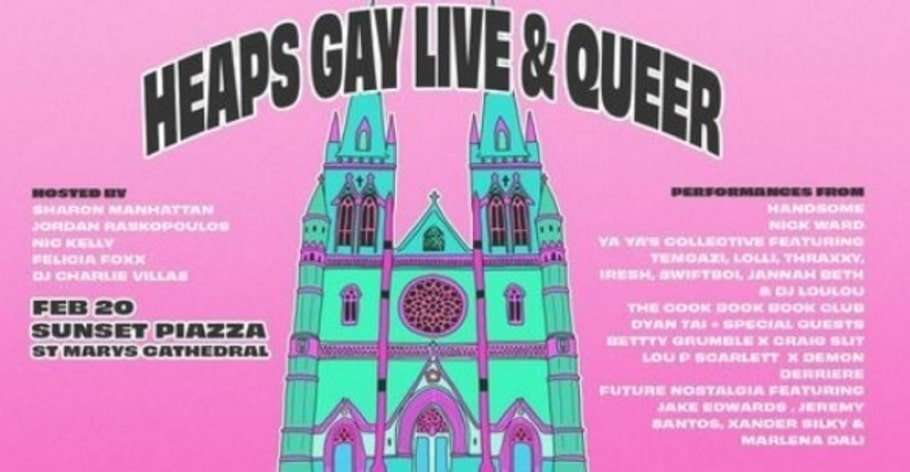 A Change.org petition calling for the council to axe the event also attracted 1000 signatures.

“The LGBT community has disrespected the Christian nation by using St. Mary’s Cathedral images to advertise their events,” the petitioner raged.

“We are fighting for rights to not allow LGBT events in close proximity of any church in SYDNEY!”

A City of Sydney spokesperson said the ad depicting the cathedral had been removed to “avoid any confusion”.

The spokesperson said the council asked all performance groups to use the official Sunset Piazza logo instead.

“In the lead-up and throughout the staging of [the events], the City consulted and liaised closely with St Mary’s Cathedral representatives,” they explained.

The spokesperson said the concert series would support Sydney’s economic recovery from the COVID-19 pandemic.

Sydney Lord Mayor Clover Moore also said in a statement Sydney was a place that valued diversity and inclusion.

“There is no place for hate, intolerance or the sowing of division,” she said.

“As we seek to revitalise the city centre and recover from the impact of the pandemic, we will continue to host inclusive, accessible and safe events.”

Earlier this week, the City of Sydney unveiled a 90-metre rainbow footpath at Prince Alfred Park in Surry Hills.

The council named the spot where the path is located Equality Green. Three years ago, 30,000 people gathered to hear the results of the marriage equality postal survey.

Lil Nas X: lapdancing in Hell: MONTERO (Call Me By Your Name)