A large crowd of locals and visitors gathered at the events’s new home at Quota Park at Nambour on Saturday for a day of entertainment and celebration of the region’s LGBTIQ community.

“Personally, I think it was our best yet. I’m really pleased with it, it was such a great atmosphere,” said Melony, a.k.a Noosa local Matt Dunstan.

“The fair day’s new spot at Quota Park felt like our own space for the day. I think the intimacy of the park was great, after holding it at the Eumundi Markets.”

For the last two and a half years, Melony has also hosted local LGBTIQ event Pinky’s at the Waterfront Hotel in Maroochydore on the last Saturday of every month.

Proceeds from the event go towards the Pride Festival and Melony frequently takes to the Pinky’s stage with longtime friends Sal Monalla (pictured below, right) and Holly Wood (below left).

“We’re a drag troupe called the Powderpuff Girls – myself, Sal and Holly – and we perform all over the Sunshine Coast,” he said.

“Sal and I used to work together in Melbourne, and we’ve been doing drag bingo together for 20 years. When she found her way to Brisbane I asked her, ‘Do you want to come up to Noosa and do some shows?'”

But Matt says getting the Sunshine Coast’s LGBTIQ community together can be challenging.

“I’ve been on the Sunshine Coast for 14 years, and I really still haven’t tapped into where the core of the community is,” he said.

“The Sunshine Coast is fragmented from place to place. I think that’s always been the biggest challenge for any event or group up here, to actually get people from the different, smaller areas.

“It’s really amazing how people won’t go from Noosaville to Noosa Heads, unless they have to. It’s a bit like that in every area. Mooloolaba stays in that area, Maroochydore stays in their area.” 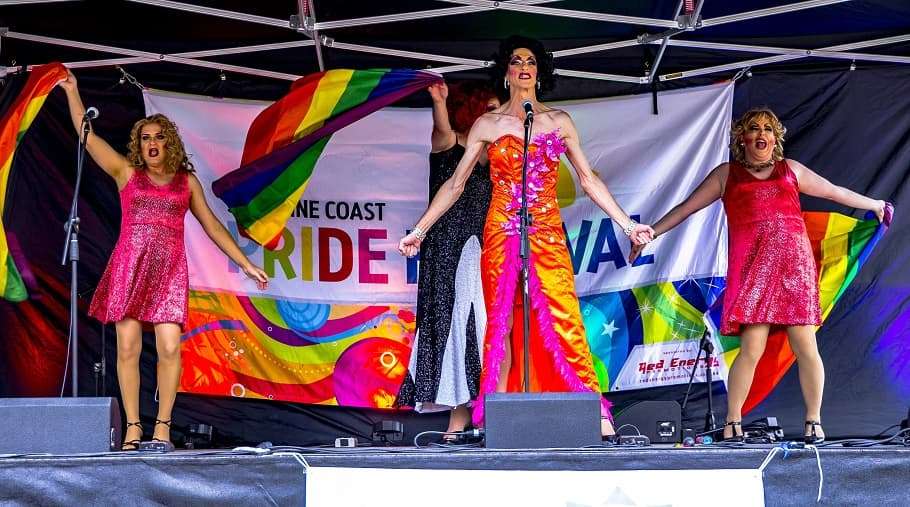 A veteran of drag for close to 30 years, Matt first made the move from Melbourne to his home of Noosa seeking a seachange after feeling burnt out on the drag scene down south.

“My partner said, ‘Why don’t we move to Noosa?’ So we moved up here and bought a chicken shop. It was a funny sort of change of pace,” he said.

He thought his days of performing as Melony were over, but Matt brought her out of retirement a decade ago to start the Drag Queen Bingo fundraiser.

The event has exploded in popularity and raised close to $200,000 for local animal charities, environmental causes, cancer research, children’s and care services and Christmas appeals.

“I did my first fundraiser up here for the Noosa Arts Theatre back in 2007 and haven’t looked back,” he said.

“We raise money for local organisations and groups, fundraising for anything from the animals to the elderly.”

For more information about Pinky’s, visit the Facebook page here. The next Drag Queen Bingo will be held on June 1 at the Cetenary Lakes Sports Club, to raise money for cancer charities. Find out more here.