A stroke charity which frequently receives donations from members of the LGBTIQ communities last financial year declared zero income. The year before, Stroke Support & Awareness Australia declared an income of $1,000.

Despite that, QNews possesses evidence of substantial fundraising activity by the charity during that time.

Set up in 2015, Stroke Support & Awareness Australia claims to “advise on the signs of stroke” and “provide information on support services.”

On its website, the charity describes itself as one of Australia’s leading stroke charities.

“We deliver stroke services across Australia, campaign for better stroke care, invest in research and fundraise to expand our reach to as many stroke survivors as possible.”

The only one of those claims QNews could substantiate was that the charity fundraises. Stroke Support & Awareness Australia’s annual returns to the Australian Charities and Not-for-profits Commission show an income in the financial year 2017-2018 of $1,000. It had no expenditure that year.

In the 2018-2019 financial year, the organisation declared nil income and nil expenditure.

However, a QNews investigation of activity undertaken by Stroke Support & Awareness Australia showed the organisation conducted substantial fundraising during those years. The charity advertised another event at the same venue at $154 per person for 25 May 2019. On social media, the charity touted that all profit would go “to launch our new stroke rehabilitation home.”

In other fundraising activity during the two-year time period, the charity placed donation tins at business premises. Documentation seen by QNews indicates at least one deposit of $366.23 from collection tins in the 2018-2019 financial year.

Additionally, the charity regularly touted for donations on social media across various accounts. The social media posts asked donors to ‘Text to’, ‘Hit me up’ or ‘Inbox for more details’. 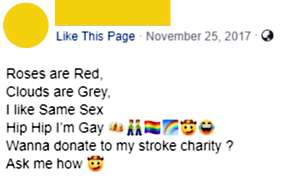 Further documentation indicates donations to Stroke Support & Awareness Australia via the Paypal Giving Fund during the 2018-2019 financial year totalling over $8,000.

Tens of thousands of dollars

QNews today forwarded a 24 page summary of our findings to the appropriate authorities. Over the last few years, fundraising campaigns by Stroke Support & Awareness Australia and associated entities have benefitted by donations from our communities totalling — at least — in the tens of thousands of dollars.

We must be able to trust the charities we donate to, the people who claim to do good works on our behalf and to advocate for us. As LGBTIQ media, if we turn a blind eye to malfeasance in these areas, we are complicit.

If you have evidence of a donation you have made to Stroke Support & Awareness Australia OR associated entities, since 2015, please email to destinyr@qnews.com.au

QNews today attempted to contact the president of Stroke Support & Awareness Australia to ask about these matters without success. We also late today emailed the vice-president of the charity but received no reply. However, the vice-president did immediately post on social media after reading our message.

“We have received a tip off more false accusations are about to be aired about me.”

Josh Goyne, ‘the gay cowboy’, is back fund-raising again