A bizarre homophobic and transphobic flyer distributed to letterboxes in the Sydney suburbs of Hurstville and Campsie ahead of the state election has been referred to the NSW Electoral Commission.

The anti-gay flyer instructs voters “Do Not Vote Labor” and is written in poor English with both Chinese and Arabic translations.

A photo of one of the flyers was posted to Reddit on Wednesday, where it was met with ridicule.

“Wow imagine these being the most pressing matters that determine your vote. Not like, uh, infrastructure or renewable energy or something,” one person commented.

Another person wrote, “Disappointing to see human efforts and resources wasted in creating and spreading this kind of thing.” 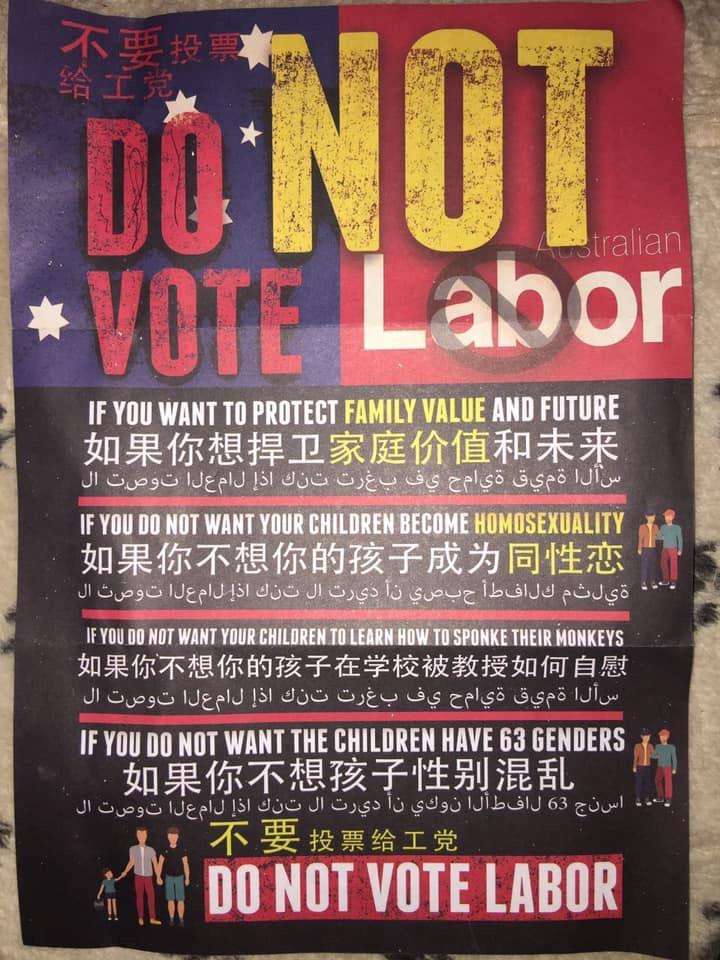 It is an offence under the NSW Electorates and Elections Act to print, publish or distribute electoral material without the name and address of the person authorising it, and the name and place of business of the printer, none of which appears on the flyer.

State Labor MP Chris Minns told 10 daily he’d heard from Hurstville residents about the “obscene” flyers and had referred the material to the NSW Electoral Commission.

The same flyers were previously distributed in September 2017 in some Sydney suburbs during a local council election campaign and in the lead up to the same-sex marriage postal survey.

“My sense is that the community in Kogarah won’t fall for these dirty tricks but they do need to be called out otherwise people will continue to abuse the rules.”

A spokesperson for the NSW Liberal Party said at the time they didn’t condone the “offensive and unauthorised” flyers and supported an investigation into their distribution.