Silhouettes: Fashion in the Shadow of HIV/AIDS is on at Adelaide’s David Roche Museum until June 18. Ben-Hur spoke with curator and fashion historian Skye Bartlett.

Ben-Hur (he/him/they) @wani_niyama is a cultural intermediary and multidisciplinary arts practitioner with a passion for brand development, community activism, and LGBTIQA+
advocacy. A Peer Support and Community Educator at Relationships Australia (SA), he also loves going to the beach, travelling, music, dancing and pasalubong (gifts) shopping.

The David Roche Museum Foundation, in partnership with SAMESH, presents Silhouettes: Fashion in the Shadow of HIV/AIDS.

Silhouettes brings together art and design by artists, fashion visionaries and activists lost to HIV/AIDS. This pivotal exhibition and retrospective speaks to ‘changing hemlines, changing worlds and changing attitudes’.

A version of this article in QNews Magazine #522 included a quote from an unrelated article in a previous magazine. The quote seemed to imply drug use by the Exhibition curator. The curator never spoke those words and the author never supplied the quote to QNews. During the design process, the quote was inadvertently transposed from the previous magazine. QNews unreservedly apologises to Exhibition curator Skye Bartlett and author Ben-Hur Winter.

Ben-Hur: I was lucky enough to attend the launch event of this exciting collection of artworks, couture looks and rarefied wearable artifacts. Over 100 vintage designer pieces sourced from institutional bodies and private collections in the United Kingdom, Australia, France and the USA.

The designers represented include changemakers from Australia, Scotland and England, France, Italy, Japan, Canada, the USA, and Argentina. Exhibition curator and fashion historian Skye Bartlett shared some insights about the featured designers.

Skye: Silhouettes started with the personal discovery of the life and works of Chester Weinberg. Stigma almost eradicated this incredibly influential American designer from fashion history. Because he was the first fashion designer to die of AIDS-related illness. I then started researching other designers who lived with HIV and died of AIDS-related illness; big names like Halston, Peter Tully, Perry Ellis, Willi Smith and Franco Moschino, and lesser-known, but equally important names like Patrick Kelly, Fabrice Simon and Ian & Marcel among others.

Stories of stigma and resilience, courage and loss

All of these designers profoundly influenced style and fashion history. But we lost almost all abruptly at the height of their power and popularity. And almost all are overlooked in recent days. It was very important to me that I didn’t simply curate together a collection of designers affected by AIDS. I wanted to tell stories about stigma and resilience and courage and loss.

It was important for me to discover the personal stories behind the 22 designers, artists and activists featured in this exhibition. I always had a misconception that the fashion industry profoundly responded to the emergence of HIV and AIDS. But I discovered that in the early days of the epidemic, this was not the case. That stigma was a story that I felt really needed exploring and unpacking.

Ben-Hur: What impetus inspired you to put the exhibition together and how long has this process taken?

Skye: Last year, in the middle of the COVID pandemic, I sat at the deathbed of my grandmother who nurtured my love of fashion and design. My mind turned to the only other occasion when I sat at a deathbed. In 2000, a friend died of AIDS-related pneumonia. And that inspired the whole exhibition.

In my role as the Team Leader of SAMESH, I have always been very interested in the intersection of health promotion and culture. Fashion is a particularly effective way to tell a story because everyone wears clothes. Even on a rudimentary level, everyone understands the importance of fashion: to keep us warm, protected and safe.

The exhibition came together very quickly, the whole process taking about a year. I am very lucky to have a team of dedicated fashion and history professionals as friends. Then also, the support of my parent organisations Thorne Harbour Health and SHINE SA as well as The David Roche Foundation House Museum. They all saw merit in mounting this world-first exhibition.

Ben-Hur: What impacts did the featured overseas designers have on the community and the wider social milieu?

Skye: All of the designers, artists and activists featured in the exhibition were incredibly impactful. Chester Weinberg was the first American fashion designer taken seriously in Europe, developing many influential silhouettes still used today.

Halston was the defining designer of the disco era. Perry Ellis pioneered separates dressing. Willi Smith was the first black multi-millionaire fashion designer while inventing the concept of streetwear. Patrick Kelly conquered the Paris fashion world in less than 5 years.

But the Australian designers, while there are fewer in the exhibition, were also influential. Peter Tully and David McDiarmid collaborated with Linda Jackson and Jenny Kee, and Tully’s unique jewellery was incredibly important. David McDiarmid, known primarily as an artist, was also an important activist. He was the first person arrested at a gay rights protest in Australia. The exhibition is intended as an international conversation about 22 people who changed the world. But in many cases, they were let down by their industry, political policy, society and their peers.

Ben-Hur: Do you have any favourite pieces or ensembles that you would like to mention?

Skye: I have a couple of pieces that I particularly love. Chester Weinberg’s pink mullet dress from his 1968 collection is really beautiful, and is such an influential silhouette that we still see in fashion today. Peter Tully’s Tom. Let. Sand. Necklace on loan from the Art Gallery of South Australia is such a delightful example of his jewellery design – three tiny plastic lettuce and tomato sandwiches strung together on a green plastic chain.

It’s not one of his more profoundly activist pieces, but I really like it. The Rosella Jardini for Moschino blazer with the giant silk faille AIDS ribbon appliqued to the back is an incredibly powerful combination of fashion and activism, and really sums up what the whole exhibition is about.

And finally, the two works by Brenton Heath-Kerr on loan from the Museum of Applied Arts and Sciences in Sydney – Tom and Betty Page. Such a brilliant use of subversive fashion
icons made into wearable art by an important Australian artist/activist. It’s the first time both pieces have been displayed in Adelaide and we were so pleased when MAAS agreed to
the loan.

The launch performance brought a live element to the intimate occasion while transporting the crowd back to 1980s New York City. The sassy pas des deux conceived by Darren Spowart and developed by Matthew Slattery (Boston Ballet) was a welcome delight.

Dynamic neo-classical elements and 80s high glamour interspersed with dance styles that reflected the urban environment and influences of the disco era. A period also affected by freedom struggles and the civil rights movement. Dressed in vintage YSL and styled by Harlo, the dancers blurred the boundaries between visual and performance arts.

Silhouettes: Fashion in the Shadow of HIV/AIDS runs until June 18 at The David Roche Foundation Museum in North Adelaide.

Book: Silhouettes: Fashion in the Shadow of HIV/AIDS catalogue

The 164-page catalogue of Silhouettes: Fashion in the Shadow of HIV/AIDS includes entries and beautiful photographs for each of the 120 works on display, as well as essays on a variety of topics by guest curator, Skye Bartlett, fashion historian and collector, Tim Roberts, acclaimed curator and fashion historian, Daniel Milford-Cottam and much more.

The catalogue is available online from The David Roche Foundation Museum. 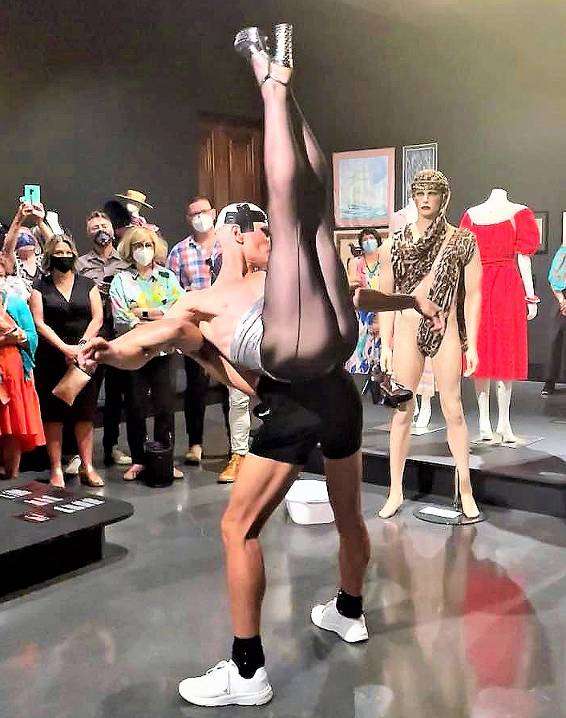