Jennifer signed up to the Women’s Royal Australian Army Corps (WRAAC) in 1979. She told me, “until I joined the Army, I had no awareness of gay people. I had no awareness that I was gay. I didn’t know that world existed.” The secret history of lesbian women in Australia’s armed forces.

This changed dramatically within a number of days of her service. She laughed as she recalled that as soon as she got to the barracks she realised her attraction to women. Moreover, she recognised that abundant possibilities existed to meet other women like her within the military.

Until the ban on homosexual service in the Australian Defence Force was lifted in 1992, gay and lesbian personnel faced persecution, punishment and discharge if their sexuality was revealed to officials.

But as Jennifer’s experience shows, prior to 1992, the military served as a highly significant space where lesbians realised their identities and forged romantic, sexual and social connections.

Historians such as Yorick Smaal, Ruth Ford, Graham Willett and Noah Riseman have found that the military attracted substantial numbers of gay and lesbian men and women many decades before the ban on their service was officially lifted.

I have interviewed more than 25 lesbian women who served in branches of the Australian military between the 1960s and the present as part of a project examining LGBT Australians in the military. Many of these women have told me of how they realised and acted on their sexuality while in the military.

Julie served in the Women’s Royal Australian Army Corps (WRAAC) in the 1960s. She remembers first feeling attraction and then love for another woman in the military environment. She then went on to form relationships with other women who were also serving.

In certain environments, she concealed her sexuality. However, through her service that she connected with other women who desired women and enjoyed a lesbian subculture. Ultimately though, her superiors forced her out of the WRAAC within days of discovering her sexuality.

Despite that, Julie refused to accept the official military edict that her homosexuality was a medical “problem”. Instead, she carried with her the knowledge of who she was. And that many similar women existed in the wider world.

Yvonne, who served in the 1980s, also came to realise her sexuality while she served in the WRAAC. She described when she fell in love with another female soldier at 23 and thought, ‘oh we can’t tell anyone’.

She told me how she felt at the time:

Like Julie before her, the exposure of Yvonne’s sexuality forced her out of the military.

Jennings explains that the 1960s was a pivotal decade for lesbians in the civilian world. Private networks remained the primary means by which lesbian women socialised. However, a more public lesbian social scene also emerged.

This scene included social groups, which also ran dances, along with a mixed bar scene. This emerging scene required some degree of connection with other lesbian and gay people. The military, while ostensibly an entirely heterosexual institution, allowed women who did not have these connections to forge bonds with other lesbians.

In preceding decades, mainstream culture rendered lesbian desire invisible. For women unaware of homosexuality or those without access to lesbian social networks, the lesbian subculture in the services after the second world war provided opportunities to express their desire for other women, albeit covertly.

Military service also presented an opportunity for women to escape societal expectations around the behaviour and expectations, career choice and marriage. 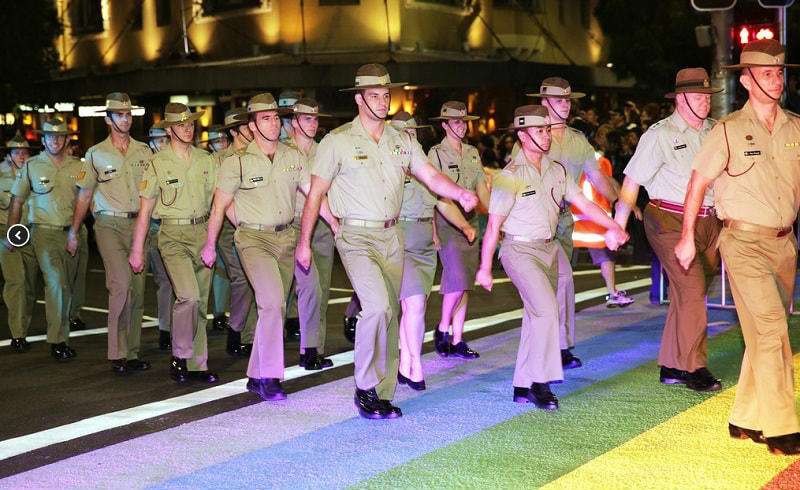 During the 1970s and 1980s, as historians such as Graham Willett have outlined, the LGBT political movement became more visible and reform began to be reflected in the lives of gay and lesbian civilians. The military still remained a popular career option for lesbian women. That despite the ban on LGBT service personnel continuing to impact on the lives of lesbian servicewomen.

With the lifting of the ban in 1992, Australia became an international leader. For those lesbian servicewomen still in the military, the removal of the ban allowed them to live openly. They could reconcile their personal lives with their professional military lives.

In one interview, a woman I spoke to became emotional when she talked about being able to take her female partner to an official military function after the ban was lifted. She no longer had to negotiate the perils of official exposure. Finally, it was possible to show what she knew to be true. That love between women existed and sometimes even thrived within the military.

Shirleene Robinson is Associate Professor and Vice Chancellor’s Innovation Fellow at Macquarie University. This article was originally published on The Conversation. Read the original article here.