Okay, so Ruby Rose has kissed women on the show as lesbian Kate Kane, but CW just released stills of her kissing a female as Batwoman.

It’s Batwoman’s first kissing scene since coming out publically in a recent episode.

Up until now, we’d only seen her with women outside of her alter-ego — as Batwoman, her sexuality had remained hidden.

Tandy, 34 plays Sophie Moore on the show, an ex-flame of Batwoman and boy does it look steamy!

In one photo, the pair are seen kissing passionately while Tandy gently caresses Rose’s face in her hands.

In another photo, the pair have stopped kissing and stare into the distance, Tandy’s hand still on Rose’s cheek. 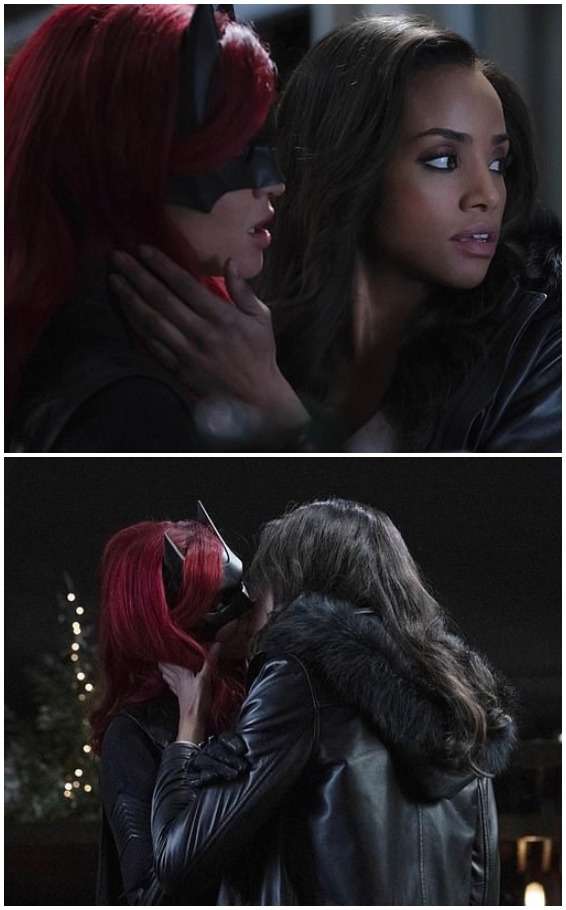 Batwoman comes out as a lesbian

Blackmail forced Batwoman to come out as a lesbian on the show.

She appeared on the cover of a magazine called Catco with the revelation.

But it turned out her blackmailer was a lesbian teenager who had been prematurely outed to her parents by an ex.

They consequently threw her out which prompted Batwoman to tell the world she was a lesbian.

Showrunner and out lesbian Caroline Dries said Batwoman’s coming out had been in the works since the very beginning.

She also said she used her wife’s own coming out as inspiration for Batwoman’s.

“Eventually Kate [realised] that she is comfortable and out of the closet as Kate and then she puts on the suit and hides a huge part of who she is, when she could actually be doing good if she were truthful about who Batwoman is under the suit,” Dries told The Hollywood Reporter.

“With Parker, the girl who pushes Kate to have Batwoman come out, I used my wife’s coming out story,” Dries said.

“A girl she was dating in high school got mad at her and called her mom and outed her. I felt like that was very relatable,

“It’s the idea of somebody who is not ready to come out yet, being weaponised against them.”

What’s next for Batwoman?

As for what’s coming up for Batwoman, we can’t be sure.

But we do know her coming out has jeopardised her identity.

Back in January, Dries said coming out will bring complications for Kate and she will struggle with anonymity.

She said coming out revealed “a huge piece of [Kate’s] identity” which in turn, “narrowed down the population quite a bit”.

But for now, let’s just be excited for the lesbian representation on screen. It’s 2020 and it’s about damn time!