Priscilla’s outrageous romp across the Australian outback earned a standing ovation from the audience at QPAC’s Lyric Theatre last week.

Priscilla Queen of the Desert The Musical has played in 135 cities in 29 countries around the world, and last month the smash hit show opened in Brisbane for the very first time.

Last week’s performance was my very first viewing of the stage production. My companion has seen it on Broadway, in Dublin, London, Melbourne and Sydney, but he told me he still loves every minute of the show.

Indeed, the entire sold-out house unleashed our inner drag queens to celebrate diversity, tolerance, mateship, and having a bloody good time along with the cast.

It is a glorious show – 500 costumes from the Oscar winning team of Tim Chappel and Lizzie Gardiner, 200 headdresses and a nonstop parade of dance floor classics.

The speed with which the cast changes costumes and paints up is dazzling. Male dancers with scrubbed faces appeared to return to the stage costumed and in elaborate drag make-up mere minutes after exiting.

While the musical is true to the movie storyline and includes most of the iconic moments from Stephen Elliott’s worldwide hit, there’s also new dance numbers, new jokes and extra business in the musical version to fill out a fun evening of glamour and high camp.

One surprising number was the spectacular tribute to Sydney’s Les Girls.

The stage sets all sparkle and the titular bus is of course wonderful. Props fly on and off the stage and somehow every location of the movie is replicated, including the great Australian outback. 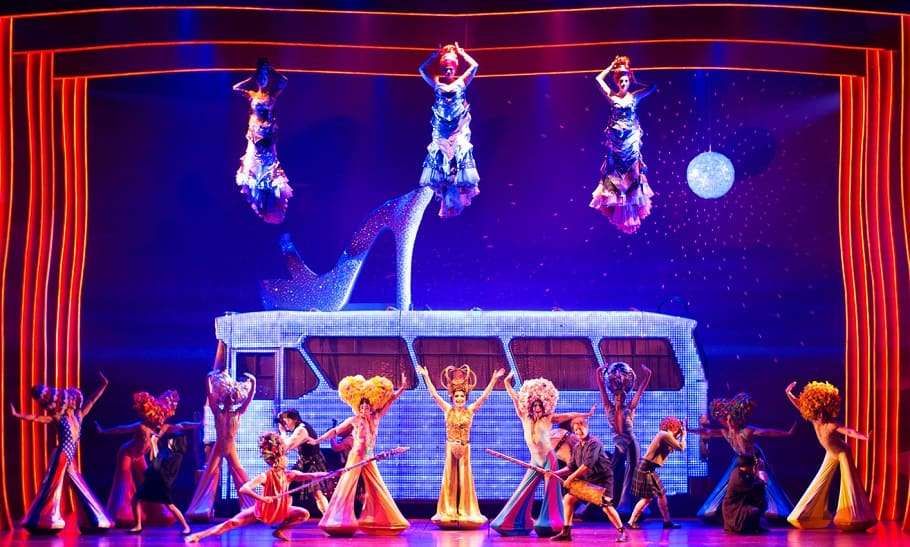 Tony and Olivier nominated actor Tony Sheldon again takes on the role of Bernadette, and during this Brisbane leg of Priscilla will reach the milestone of 2000 shows as the character.

Special mention must be made of Angelique Cassimatis, Samm Hagen and Cle Morgan as the three divas who float down from the rafters every few minutes to belt out pop hit after hit.

Somehow, they also manage to dance while suspended by wires high above the stage, and the trio’s powerhouse vocals get the party started and keep the party going.

Priscilla Queen of the Desert – The Musical is on at QPAC until 4th November so get in quick for a fabulous celebration. Tickets are available here.