The infamous Citipointe College contract banning gay and trans kids has thrown a hand grenade into the national debate about Scott Morrison’s Religious Privilege Bill. Fill out the Just.Equal election survey and let’s Kill the Bill!

Rodney Croome is a board member of Just.Equal Australia.

Suddenly, millions of Australians can see what kind of bigotry and denigration the Bill will allow if it is passed.

Knowing how bad this is for him, Scott Morrison is trying to appease moderate Liberals who are unhappy with the Bill.

He says he will protect LGBTIQ+ kids from discrimination.

But, if his past efforts are anything to go by, we should all be sceptical.

Privately, more Labor members are beginning to criticise not only the Bill but also their Party’s studious silence about it.

This is refreshing given Labor’s infuriating failure to defend the many state and federal anti-discrimination laws that are their legacy and which the Federal Bill will wreck.

Just.Equal Australia has launched two campaigns that allow you to email moderate Liberals and Labor asking them to Kill the Bill.

Tell the Libs to Kill the Bill!

Tell Labor to Kill the Bill!

These are the two groups that could still scuttle this calamitous legislation.

But how they will vote is still unknown. So, are the shonky deals they may do over the legislation.

It’s up to every one of us to make sure that’s what happens.

The upcoming federal election campaign is another way we can have our voices heard.

We are a powerful community when we speak our minds.

But in the past, political parties ignored what we want and made decisions for us, telling us what their LGBTIQ+ commitments will be (if they have any at all).

Just.Equal’s community election survey outlines a list of possible commitments the parties could make to us and then asks LGBTIQ+ people to say which of these are our highest priority. 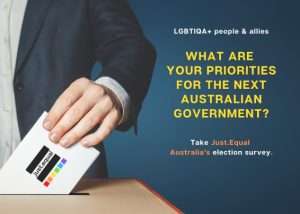 Once a good representation of LGBTIQ+ Australians offer their views, Just.Equal will take this to the parties and say “this is what we want”.

The survey was designed with the assistance of social scientist, Dr Sharon Dane.

She has incorporated some important features. For example, everyone taking the survey can answer questions about trans or intersex issues, but weight will be given to those responses from trans and intersex people. It’s the same for gay and bi men and trans women answering the question about blood donation.

The survey will take about twenty minutes. But it’s worth it to make sure we tell the parties what we want instead of them telling us.