Vandals have spray-painted a Nazi swastika over a rainbow flag on signage belonging to the LGBTIQ-friendly Metropolitan Community Church in New Farm, Brisbane.

The church’s senior pastor Alex Pittaway said the vandals had painted the large grey swastika over the flag on their street-facing sign on Wednesday night. He told QNews Magazine he’d reported the incident to the police, who are investigating.

“We have to leave the sign in place until the police complete their investigations,” he said.

“At some point the sign will be taken down and either cleaned off or replaced.

“As confronting as the vandalism is, it serves as a reminder that this kind of hate is still out there and we need to come together and stand against it.”

Pittaway said the church’s signage had been targeted by Neo-Nazi vandalism before, but the new graffiti is “much more brazen and disgusting than last time.”

Last September, a contingent from MCC Brisbane returned to the property after participating in the annual Brisbane Pride march to find vile stickers bearing the name of the Neo-Nazi hate group Antipodean Resistance had been plastered on their signs and banners.

Pittaway, who has pastor of MCC Brisbane since July last year, said he wanted the LGBTIQ community, the Christian community and the church’s neighbours in New Farm to rally together against homophobia and hate.

“We will not respond to hate with more hate, we will only respond with love,” Pittaway said last September.

“We will only respond with unconditional acceptance to anyone who walks in through our doors.”

MCC Brisbane meets at the Uniting Church at 52 Merthyr Rd in New Farm every Sunday evening at 7:00 pm, and all are welcome to attend. 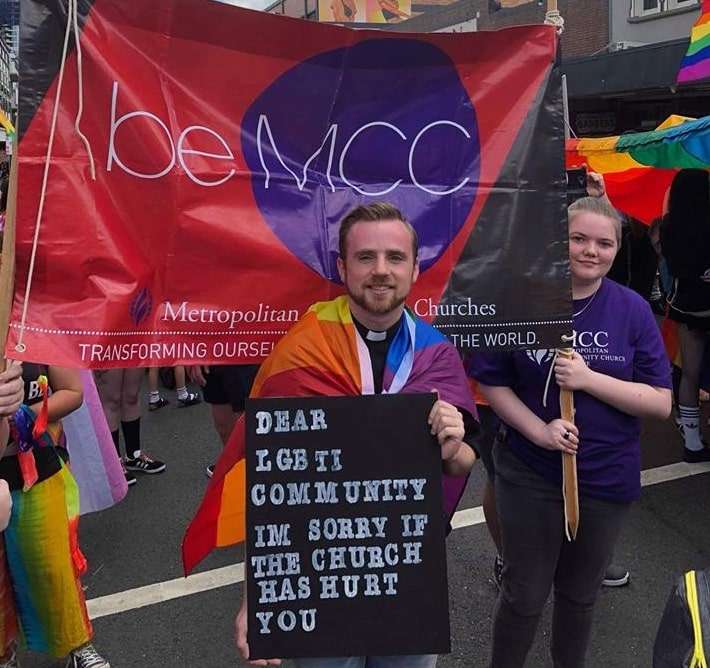