Overwhelming demand from the newly visible LGBTIQ community soon saw the establishment of a second site, Stonewall Medical Centre, at Windsor in 1995.

He also thanked all clinical, administration and support staff, past and present, for helping make Stonewall a well-loved institution.

The Service was a response to government inaction over the AIDS crisis, supported by private donations through the Queensland Aids Council (QuAC) and by the loan of premises from the Sisters of Mercy.

Dr Orth noted the rarity of openly gay doctors at the time, and the continuing role of Stonewall and Gladstone Road clinics in LGBTIQ-focussed medicine in Brisbane.

Sexual Health Physician Dr Graham Neilsen noted how different things were when he trained in the 1970s and been witness to LGBTIQ friends struggling with lack of social acceptance at that time. 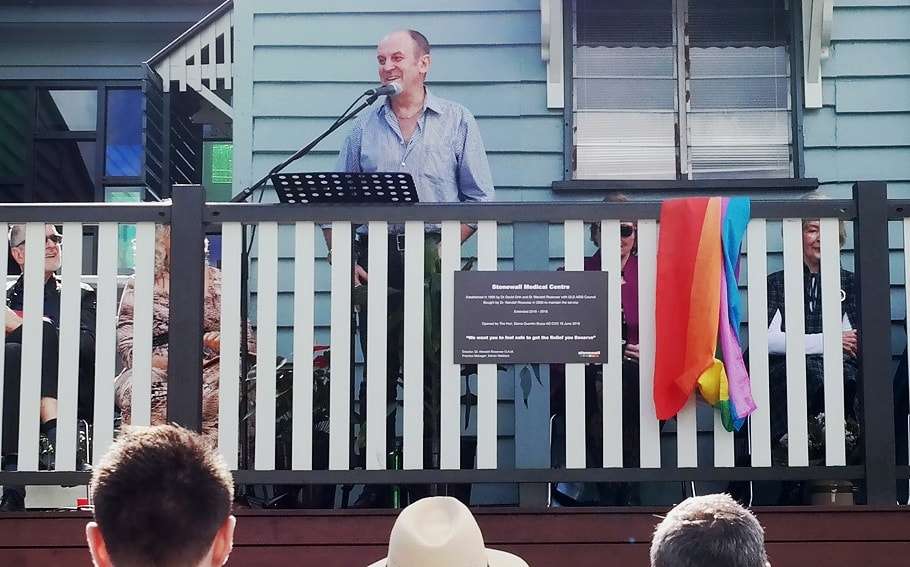 This encouraged Dr Neilsen’s interest in sexual health medicine, leading to international work in the field, including with the World Health Organisation.

Dr Neilsen said he had gladly accepted the invitation from owner Dr Wendell Rosevear to practice at Stonewall, helping to make it a place where transgender people especially could rely on a specialised understanding of their lives which can often be lacking elsewhere.

Clinical Social Worker Jane Meakin spoke warmly of being a part of Stonewall and said she could not now imagine working anywhere else.

“I think they’ll have to carry me out in a box,” Ms Meakin said.

The celebratory program on Sunday (June 10) was hosted by local civil celebrant Ms Anna Heriot, and proceedings included cornet fanfares played by medical student William Harley and a rendition of “Somewhere Over the Rainbow” from Clinical Nutritionist Mel Trebilcock on violin and Dr Ryan Williams on a keyboard.

Dame Quentin and Dr Rosevear then raised a rainbow flag to reveal a plaque commemorating the day and bearing the message, “We want you to feel safe to get the relief you deserve”.

She shared her warm regard for Dr Wendell Rosevear since working together on a Queensland Government committee set up in response to her 2015 report on domestic violence Not Now, Not Ever.

She congratulated Dr Rosevear on the work of Stonewall and on the centre’s expansion, also noting Dr Wendell Rosevear’s major contribution in areas such as addiction and abuse, working with both victims and perpetrators.

US regulator approves the first injectable PrEP to prevent HIV