Queer Objects landed on my desk this week — a captivating pop-up museum of queer history. “Queer lives give rise to a vast array of objects,” writes Otago University Press of this remarkable book of objects edited by Chris Brickell and Judith Collard.

I flick through the book and immediately come across a fascinating chapter by Dino Hodge that references the Frontier Wars.  Just the day before, I witnessed yet another social media skirmish on those very wars.

Why are the people dismissive of history so angrily dismissive?

Despite legal and social proscriptions against queer people making historical artifacts, many did.

And some of those diaries, photographs, paintings, books, and ephemera survived the often systematic erasure of queer existence from history.

Queer Objects is an absolute treasure trove of artifacts across millennia of queer history. 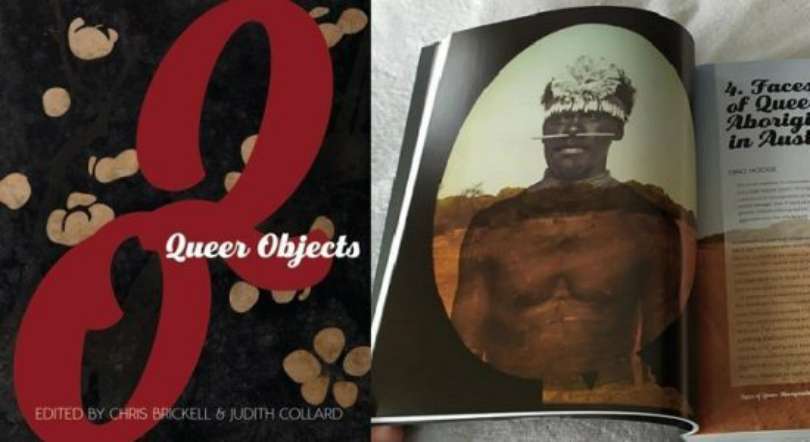 “The famous Greek poet Sappho lives on in fragments: hints and rumours,” writes Chris Brickell in Chapter 9. “…and the shreds of papyrus on which her poems are recorded.”

How extraordinary that more than two and a half millennia after she wrote her poems, remnants remain of Sappho’s paeans to the love that bears either her name or that of her island home.

I flick through looking for the names of authors I’ve read before. Yorick Smaal is in there writing on The Australian Speedo and there’s his sometimes collaborator Shirlene Robinson. Shirlene tells the story of a Military Discharge Certificate issued to a lesbian who broke no law — did nothing wrong. She simply got outed. Tim Roberts contributes two chapters, one about the letters of Donald Friend and another on the Rangers Motor Club Flag.

I flick back from Shirlene’s article and discover a belief in destiny. For the past week, I’ve researched and written on a certain Dr. Neil McConaghy. So what do I see but a splendidly illustrated chapter from Kate Davison titled Neil McConaghy’s Penile Plethysmograph.

An aversion therapist in Sydney in the 60s and 70s, McConaghy inflicted painful tortures on gay men to ‘cure’ them. However, his true purpose was not to change people’s sexual orientation but to research the human brain. To that end, he attached his human guinea pigs to a ‘penile plethysmograph’.

That contraption measured changes in penile volume — in other words — hard-ons. Dr. McQuack judged the success, or in truth, failure of his ‘treatments’ by the rate of sexual arousal indicated by hard dicks.

I eventually went back and read Queer Objects from front to back — all 63 fascinating chapters. The book collects objects from collections in New Zealand, Australia, North America, Europe, and Asia.

Transgressive? That perhaps refers to Margo Hobbs’ chapter on The Cunt Coloring Book or any of a few others.