LGBTIQ Australia descended on North Queensland over the weekend for this year’s Cairns Tropical Pride.

The Pat O’Hara Award for Lifetime Achievement was accepted by Dave Weston on behalf of his late partner Brendan Leishman, otherwise known as Jamilla ILash.

Brendan passed away on April 19 and is remembered from one end of the state to the other for his work in sexual health and community building and for Jamilla’s work as a sensational entertainer.

The President’s Award went to Maurice Milliner for his many year’s work on both Cairns Tropical Pride and the infamous Festival of the Knob, named for the seaside village that hosts the event, Yorkeys Knob.

Maurice proudly flew the Rainbow Flag at the Festival of the Knob in 2009 arousing the ire of one local gentleman who wrote to the Cairns Post outraged at the flagrant homosexual behaviour his children witnessed at the festival.

The innocents had been subjected a group of LGBTIQ people singing Broadway showtunes in public – outrageous!

Saturday morning saw a flash mob of LGBTIQ locals and visitors at the Rainbow Crossing in the Cairns CBD (pictured above).

On the street and in nearby cafes, Cairns locals showed their support cheering and clapping the colourful procession of Rainbow Flags. 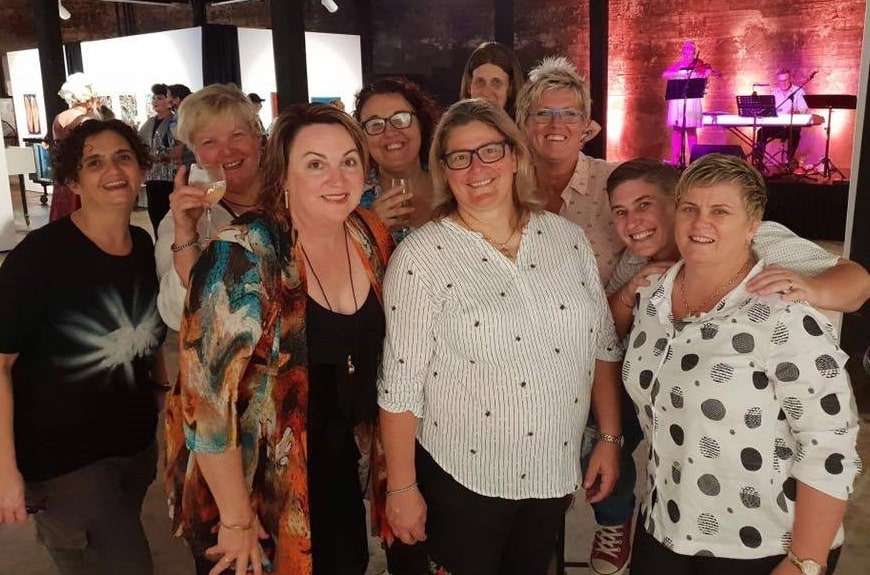 Everyone from babies in prams to 82-year-old elders of the community participated before moving up the street to the Cairns Museum.

Cairns LGBTIQ elder Ian Byford officially presented the first LGBTIQ collection in a regional museum to museum manager Suzanne Gibson who mentioned her pride as a lesbian in accepting the collection.

The collection incorporates photographs and hand-painted banners from the local “YES” campaign for marriage equality.

The material goes all the way back to a photo of the first Cairns marriage equality campaign in 2010, featuring Destiny Rogers as MC and current Labor candidate for Leichhardt Elida Faith.

Australian drag star Karen from Finance performed and opened the Dog Show in an outdoor amphitheatre in the foothills of rainforest shrouded Mt Whitfield.

Karen left Cairns in no doubt why her performances have attracted worldwide acclaim.

“Don’t pay me any mind,” Karen said, “This is just something I do to fill in time between reconciling accounts and sending out reminder notices.” 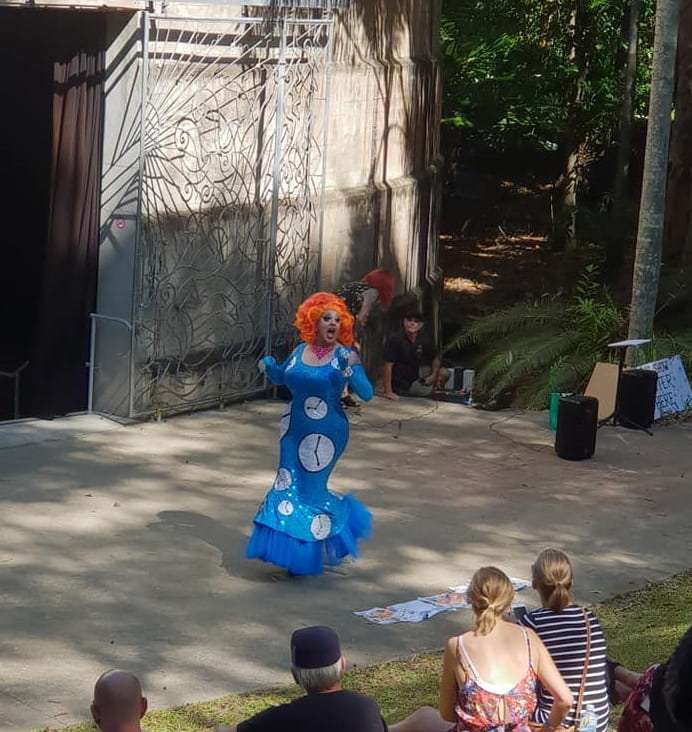 Karen from Finance performing during the dog show

Local north Queensland politicians were quick to offer support for the bid to bring the inclusive sporting competition to the state. 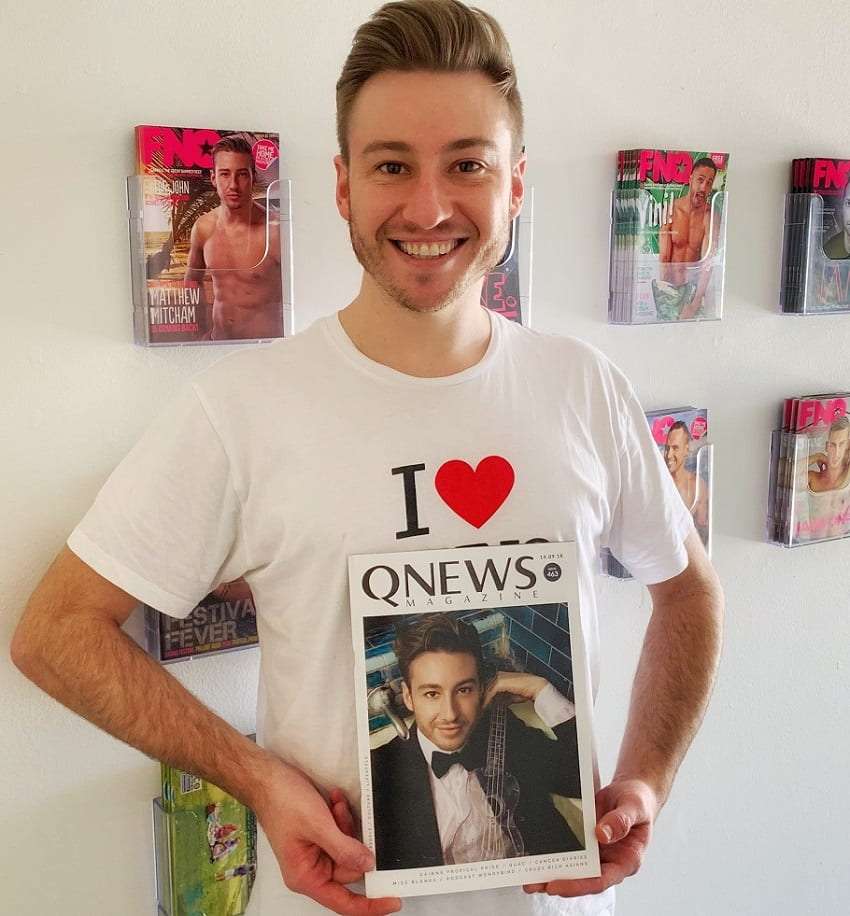 Outgoing Festival Director Destiny Rogers said the most pleasing aspect of the festival was the support shown by the local community, organisations and businesses.

She said the spirit was best summed up by the words of festival sponsor Maurice Blackburn Cairns.

Principal Lawyer Giri Sivaraman said, “We are delighted to support Cairns Tropical Pride in this wonderful celebration of diversity, inclusion and harmony!

“It’s very important that regional Australia gets its chance to promote equality and fighting discrimination, because we truly believe everyone has a right to be proud of who they are – so have a fantastic and safe Cairns Tropical Pride 2018!” 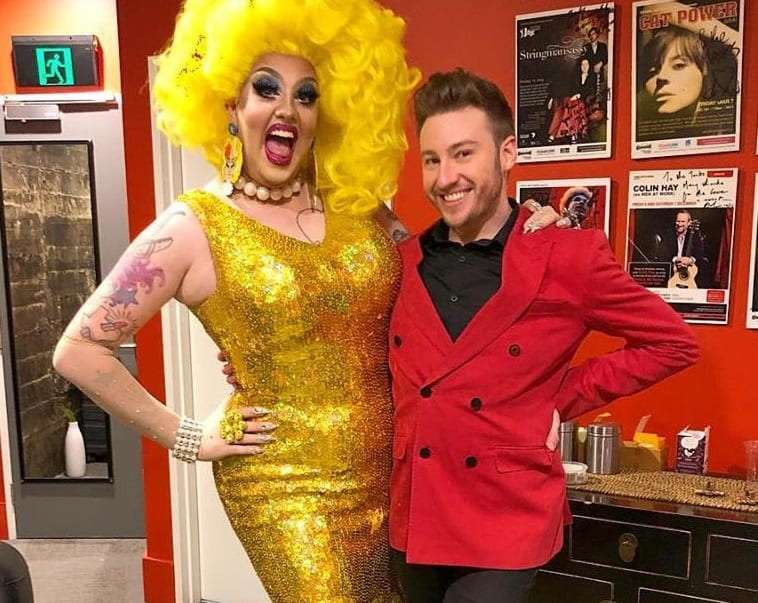 Karen from Finance and Matthew Mitcham

Destiny added, “Cairns has always been a very diverse and inclusive community and we have a long history as an organised and proactive LGBTIQ community.

“The organisation which achieved decriminalisation of homosexuality, the Queensland Association of Gay Law Reform was founded in Cairns in the late 1980’s and Cairns Tropical Pride itself has been held since 2007.”

Light up the Night gala ball for DV Awareness