The Queens Ball book, launched as a PDF on Saturday, documents the longest-running continuous LGBTIQ+ event in the world. Proceeds from book sales will fund an annual award in honour of Brisbane Queens Ball founder, Dame Sybil von Thorndyke.

Scroll down for purchase link

Publisher Bill Rutkin OAM said the book will go into print after the easing of the pandemic. He intends a print run in time for next year’s 60th annual Queens Ball.

The longest-running continuous LGBTIQ+ event began as a house party on Mount Tamborine in 1962. At the time, the local ‘camp’ community, suffered relentless police raids on events they organised in town. Although the police rarely encountered any activity worthy of criminal charge, the raids discouraged attendance and disrupted the festivity.

Tired of the raids, a group of community members rented holiday cottages on Mt Tambourine over the Queen’s Birthday weekend.

They held a fancy dress party and awarded gold-painted Kewpie dolls for the best costumes.

Laurie Deane, well-known in the community as Dame Sybil von Thorndyke, co-founded the event with community elder Ron Sheard. The Ball soon outgrew the cottages and moved to a local hall. After the first decade, Ron retired and Sybil steered the event over the following decades.

Moving from Mount Tamborine, first to the Gold Coast and then to suburban Brisbane venues, the Ball found its way into inner-city Brisbane in the late seventies.

In recent years, the event once held out of town to escape the attention of the authorities, moved into Brisbane City Hall. The authorities the event once sought to avoid now attend in the form of government ministers who take to the stage to announce their pride in joining in the celebration.

Priced at $5.95, all proceeds from the PDF sale go to funding an annual award in honour of the Ball founder.

Purchasers of the PDF will also receive a $5.95 discount on the purchase of the print edition. 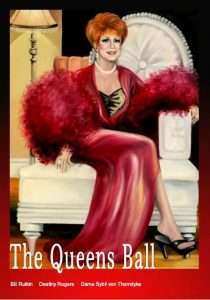