NSW Police have arrested four people for entering the pitch during Saturday night’s Mardi Gras Parade at the SCG, including at least three protesters who opposed the police’s participation in the event.

NSW Police said in a statement the four individuals entered the pitch during Saturday night’s parade at about 8.45pm. Officers removed them from the SCG and issued banning notices.

In a statement, activist group Pride in Protest said the protesters who were arrested belonged to the Whistleblowers, Activists, and Communities Alliance (WACA).

“Three protestors associated with WACA protested the presence of police in the parade,” a spokesperson said.

“Two successfully marched on the grounds with a banner saying ‘No Pride in Police Violence’ until they were removed by cops.

“A third was forced into a painful hold for no discernable reason before being dragged away.”

Around Australia, debate has raged in recent years about the participation of uniformed police in the country’s Pride Parades.

Earlier in the day, Pride in Protest joined other groups for a political protest rally along the traditional parade route on Oxford Street.

“The police, and corrective services, are a leading perpetrator of violence toward First Nations peoples and have a long history of over-policing minorities,” a Pride in Protest spokesperson said.

“It is shameful that the cops continue to be offered space in Mardi Gras and Fair Day to promote themselves amidst their ongoing brutality against oppressed peoples.”

Commissioner Webb led the NSW Police contingent in the Parade at the Sydney Cricket Ground.

The force said it reflected the organisation’s “commitment to inclusion, diversity and equality.”

“I am immensely proud of all of our officers and it was a pleasure walking with them at this important event,” Webb said.

The NSW Police were among 160 groups and 5,800 marchers in this year’s parade.

A contingent of officers from the Australian Federal Police also marched. 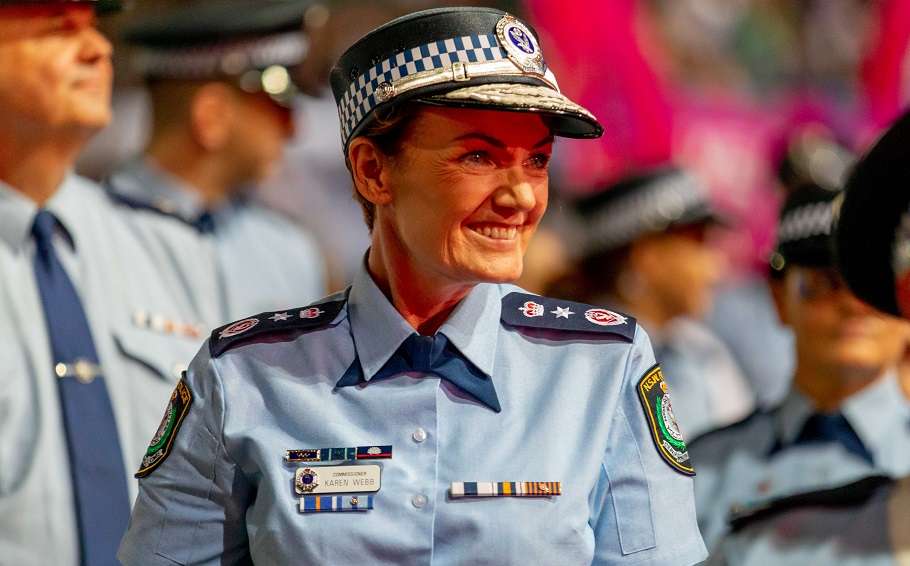 In a statement, NSW Police said they’d conducted a “highly visible operation” on Parade night “aimed at ensuring the safety and wellbeing of the community”.

As well as the SCG arrests, police also charged a 17-year-old boy with commiting an offensive act at a war memorial and possessing a prohibited drug.

The teenager allegedly urinated on Hyde Park’s ANZAC Memorial about 10.45pm. He will appear before a children’s court on April 12.

“I am proud that the officers of the NSW Police Force, an organisation that promotes diversity and inclusion, contributed to that,” Talbot said.

“Despite the few incidents that officers responded to during the Mardi Gras operation, the majority of people were well-behaved and enjoyed their celebrations safely and responsibly.”