The campaign was age equality.launched last month by the Parents and Friends of Lesbians and Gays (PFLAG).

Encouraging people to send the text message “backbone” to a number that will.

In turn, trigger an email to Prime Minister Turnbull.

The six mobile billboards will travel around the Prime Minister’s electorate of Wentworth.

This will show Mr Turnbull his constituents want him to lead on marriage equality by allowing a free vote.

PFLAG national spokesperson Shelley Argent said the Prime Minister needs to do more than voice his personal support for the reform.

“It’s not enough for Malcolm Turnbull to support marriage equality, he has to grow a backbone and lead on it as well,” she said.

“As parents, we cannot stand by while our children are treated unfairly 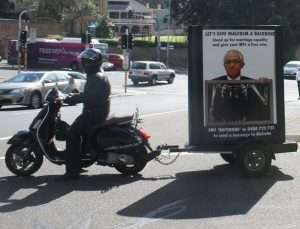 PFLAG: Give Turnbull A Backbone Billboards

The six mobile billboards will carry the “get a backbone” message across Sydney.

Parents and Friends of Lesbians and Gays  (PFLAG)

Dear Malcolm,
You’re elected to represent the people of Australia. Every single poll shows the majority of Australians, including me, support marriage equality. I am asking you to show leadership and stand up for Marriage Equality by allowing a free vote so it can finally happen. Mr Turnbull you are the leader of the Government, please lead on this important issue.

Those who send a text message will be urged to take further action by sending an email to other Government members through PFLAG’s Make It Law website. The group said 5000 emails have already sent to Malcolm Turnbull asking him to “get a backbone” on marriage equality.

Religious Privileges Bill: Teachers can be fired for sexuality