A group of ’78ers have heard NSW Commissioner Mick Fuller deliver an apology for the police violence that marred the original Mardi Gras march on June 24, 1978.

That night, the marchers held a celebratory parade that was violently broken up by police. Fifty-three of the marchers were arrested, beaten and publicly outed and shamed in the media.

The event would go on to become the modern-day Sydney Gay and Lesbian Mardi Gras celebration.

Fuller said the stories he had heard from the ’78ers left him feeling “embarrassed – and not just to be a police officer, it’s much, much broader than that.”

“You get one chance to try and heal the wounds of the 40 years… I thought to myself, ‘Well, what do I say?’” he said.

“As the Police Commissioner, I am personally sorry… To the ’78ers, thank you. The movement for equality began with you.

“As the New South Wales Police Force Commissioner, I am truly sorry for the way that you, and the LGBTQI community, were treated back in 1978.

“The actions of police and society and the laws behind them at the time were wrong.

“They caused a deep and damaging rift between police and decent citizens who just happen to be gay.

“To the LGBTQI community, I’m sorry for our mistakes in the past. We acknowledge the pain and hurt caused by the actions of government agencies driven by the indifference of society.

“But with my personal vow never to take a backwards step, the NSW Police Force has worked extremely hard to mend this relationship over the last few decades.

“We are positive about the prospects of a better future together, but I felt that future wouldn’t be the same unless I came here today and said sorry.

“I can make you a promise we won’t take a backwards step, and I would much rather step forward in a partnership and that’s why I’m here today.”

The First Mardi Gras, an organisation representing the 78ers, thanked Fuller for his apology after five of the brave pioneers delivered emotional speeches reflecting on their memories of the march.

“Today, five 78ers gave powerful speeches that brought tears to the eyes of audience members,” they wrote on Facebook.

“In addition to an unreserved apology, Commissioner Fuller committed the Police Force to never repeating the abuse suffered by 78ers again.”

The NSW Police first apologised to the 78ers in 2016 and earlier this year flew a rainbow flag at their headquarters in Sydney for the first time to mark Mardi Gras’ historic 40th anniversary.

At a special gathering on June 24 (pictured below), the 40th anniversary, Assistant Commissioner Tony Crandell apologised for the police brutality against the marchers at the site of the original protest in Sydney.

The original 1978 protest was depicted in the ABC telemovie Riot earlier this year. To read more about the 78ers, click here. 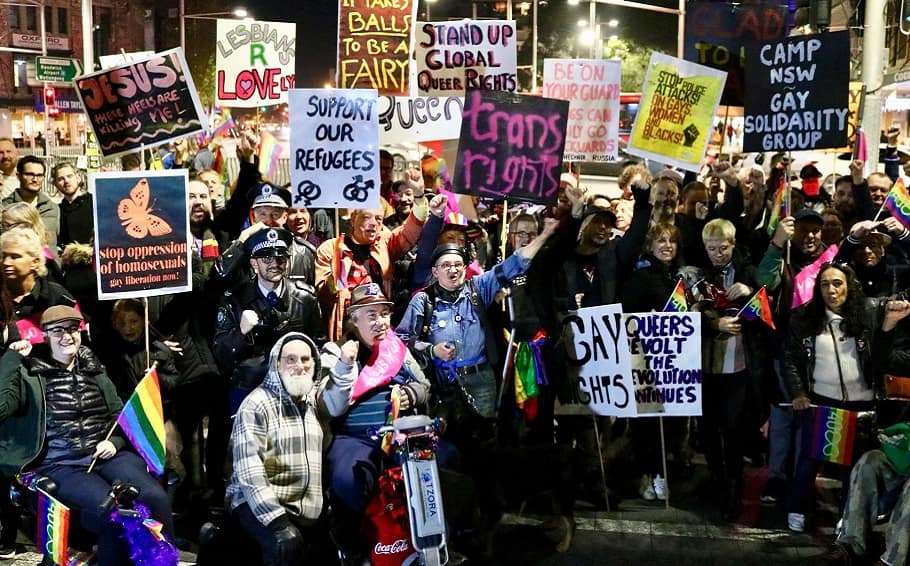