In case you missed it, Youtuber Josh Pieters flew notorious racist and homophobe Katie Hopkins to Prague to present her with an award he entirely made up.

Who is Katie Hopkins you ask? Well, here’s a quick rundown.

According to Wikipedia, Katie is an English columnist, business woman, and media personality. She also appeared on the third season of The Apprentice in 2006.

But more than that, Katie has been slammed over the years for her right-wing views.

Not only has she has rallied against LGBTIQ teachings in schools, but she has been extremely open about her racist and Islamophobic views.

She has also mocked the Transgender Day of Remembrance and attacked women who breastfeed.

Oh yeah, she said dementia patients are “bed blockers” and questioned their point of living. She’s a real gem.

Fool her once, perhaps it was deserved?

He posed as Leslie Peters, the CEO of a fake organisation he called the Capetown Collective for the Freedom of Speech.

He even made a fake website with a fake history and fake staff, all to get the attention of the delightful Katie Hopkins.

Then he emailed her, inviting her to Prague as the honourary recipient of a lifetime achievement award.

He called the award: Campaign to Unify the Nation Trophy. She gleefully accepted. 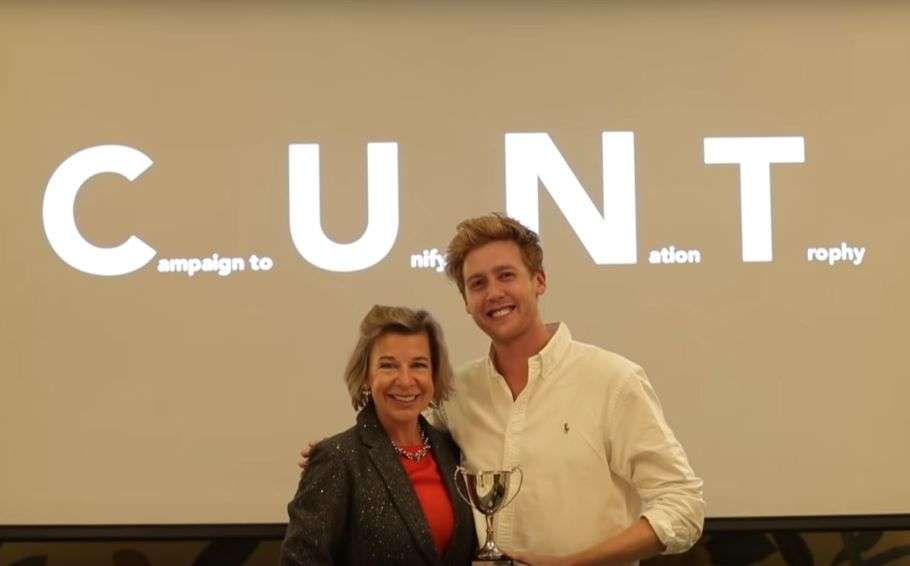 But did the prank go too far?

People online have scrutinised the Youtuber for his elaborate prank, branding it misogynistic.

Many feel flying a woman to a different country purely to insult her in front of a room full of men was predatory.

Am I alone in being very uncomfortable with the prank played on Katie Hopkins?

I’m not keen on the idea of a man flying a woman oversees to attend a fake event, where she’s sitting in a room with (from the video) all men, all of whom are involved in tricking her.

You’re not alone, I thought that was sickening and I didn’t understand why so many people are cheering him on.

I thought it was awful. I’m no fan of hers, but it was a terrible thing to do – just stalking and bullying. And the poster behind her saying C*nt was horrible and so sexist.

Oh yuck. No. I’ve spoken out against misogyny directed at her before. Attack her for her views, not for being a woman.

Would Katie feel the same?

The backlash Josh has received though has me wondering if Katie would hold the same views.

Because yesterday, she uploaded an article called Women who can’t cope with a sexist joke need to toughen up.

In the article, Katie said feminist views “do women no favours” and “Britain is in ­danger of losing its sense of humour”.

“It treats all women as pathetic victims who need special treatment,” she said.

But then she admitted people often refer to her as a “traitor to the sisterhood”.

It appears this is a compliment for Katie though, who often refers to women’s rights activists as “feminazi’s”.

“Women should toughen up,” Katie believes.

“The ­feminist agenda is weakening their ability to handle the real world.

“If a woman [is offended], that says more about her inability to deal with challenging situations.”

We don’t really know, however, if receiving the C.U.N.T offended Katie because last week she was banned from Twitter for spreading hate speech.

We’re yet to formally hear a statement from her.

As for the video being misogynistic, well we’ll let our readers decide. You can watch it below.

Oops he did it again! Scotty and the queer boogeyman