An American pastor’s interruption of a secular event and consequent ‘prayer cleansing’ illustrates the dangers of Australia’s proposed ‘religious freedoms’ bill. The pastor cut off the microphone to a gay speaker at an event held in his church. A few days later, he asked his congregation to bow their heads and join him in a ‘prayer cleansing’. Shelley Argent, national spokesperson for PFLAG, said the incident shows the dangers of enshrining religious privilege in legislation. Rodney Croome from just.equal said the legislation will lead to many similar outcomes, and worse.

Colorado’s Community Resource Centre holds regular ‘Rural Philanthropy Days’. Those events bring together grant-giving bodies and philanthropists with non-profits in search of funding. Between 2009 and 2015, the events facilitated 750 grants totalling US$22 million.

In September, the centre booked the Gateway Church in Del Norte, Colorado for its local event. The church is the largest local building capable of accommodating such an event.

Although the church’s website is currently not available, it is assumed the resource centre hired the building for their conference.

The resource centre invited Justin Garoutte to give the keynote speech. He is a researcher working to understand and reduce suicide among LGBTIQ adolescents.

Promotion for the event promised a session highlighting local storytellers. During his speech, Justin shared his coming-out story. He spoke of his inner turmoil over the clash of his religious beliefs and sexuality. He told of reciting hundreds of ‘Hail Marys’ and ‘Our Fathers’ hoping for a miracle.

But then the microphone cut out. Justin at first attributed that to technical difficulties. However, Pastor Greg Schaffer then began yelling from the sound room at the back of the venue for Justin to watch what he said.

After frantic negotiation between event organisers and Schaffer, he turned the mic back on, albeit, at a greatly reduced volume. Justin finished his speech to a standing ovation.

A few days later, Schaffer gave a sermon on the matter and lead his congregation in what he termed a ‘cleansing prayer’.

Video of the ‘cleansing prayer’ caused outrage. Protestors picketed outside the church, and unfortunately, some people made threats against both the pastor and the church.

When religious institutions operate commercial enterprises but are allowed exemptions from normal business practice, LGBTIQ communities end up denied the use of commercial facilities they subsidise as taxpayers.

Because the exemption excusing religious institutions from paying tax costs every Australian something.

Shelley Argent, national spokesperson for PFLAG told QNews.com.au of her concerns regarding the proposed exemptions.

“All Australians, including the LGBTIQ communities, forgo facilities and services governments could otherwise provide if churches paid tax on their for-profit business enterprises.

“Australian churches rake in over $30 billion annually. To allow that to remain tax-exempt while denying an organisation hiring a church hall, for example, the right to hear an LGBTIQ person share their coming-out story is gross discrimination.” 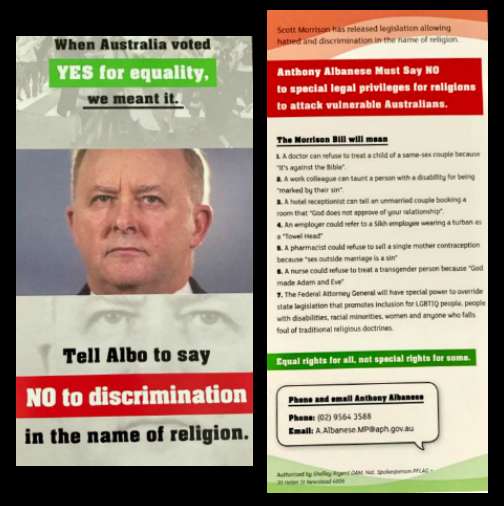 Shelley also addressed a letter to Prime Minister Scott Morrison. She reminded him of his Parliamentary oath to bear true allegiance to the Queen and all the citizens of this country.

She also asked voters who are, in the Prime Minister’s words, ‘silent Australians’ and who don’t agree with religious discrimination to email or phone his office.

Shelley Argent will spend the next three days in Canberra meeting with politicians from across the political divide to the proposed bill.

“It will legitimise discrimination and hate against us. For example, doctors and nurses will have free rein not to treat us. Anti-LGBTI authors found to breach discrimination law will successfully plead innocent by way of exemption. And workplace inclusion programs would be much easier to undermine.

“Worst of all, the idea that LGBTI people pose some kind of threat from which people of faith need special protection would be legitimised.

“In the US, this false narrative has led to a resurgence of discrimination against LGBTI people, not only from faith-based services, but also from government and business. The same would happen in Australia.”