Virginia pastor Landon Spradlin died Wednesday from COVID-19 after previously sharing a meme describing the response to the pandemic as a media beat-up and ‘mass hysteria’.

The meme seemed to echo of the words of Australian broadcaster Alan Jones who, at about the same time, described the response as ‘hysteria and alarmism’.

Describing the response to the pandemic as a media beat-up to damage Donald Trump as president, the meme also compared the virus to swine flu.

Spradlin became ill during a trip to New Orleans. An accomplished musician, his evangelism took the form of musical street ministry. He and his wife visited New Orleans on a mission to ‘wash it from its Sin and debauchery’.

On the drive back to their home in Virginia, the pastor’s condition deteriorated. He collapsed at a petrol station in North Carolina. At 66-years-old and suffering from asthma and other respiratory conditions, he fitted most of the risk factor categories for COVID-19. Then, on Wednesday, he died. 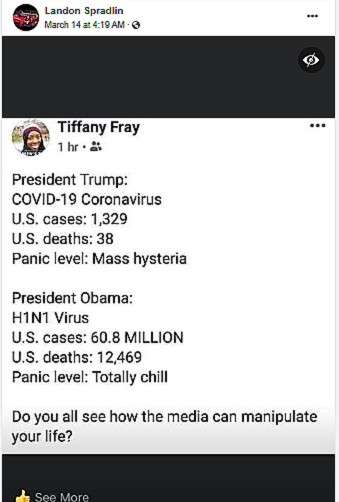 When a friendly commenter pointed out the inaccuracies in the meme, Spradlin agreed but still insisted on a media beat-up. Further, he suggested COVID-19 would simply ‘come and go’.

“I agree. I believe it is a real issue, but I believe the media is pumping out fear and doing more harm than good. It will come and it will go.”

The account the meme originated from bore the hallmarks of the troll groups that sow dissension to aid Trump’s re-election. Before its deletion, the account posted other similar memes. Facebook since added a warning to the first meme, describing it as inaccurate.

Spradlin also shared a post from another pastor that claimed a missionary in Africa protected himself from the bubonic plague with the ‘Spirit of God’.

“As long as I walk in the light of that law [of the Spirit of life], no germ will attach itself to me.”

Rather like Margaret Court’s church claiming the ‘Blood of Jesus’ would protect the congregation from COVID-19.

While Spradlin’s death is no doubt ironic, sadly some of his fellow American were not satisfied to have a quiet chuckle. Hundreds of them attacked his Facebook celebrating his death.

While Spradlin made a silly mistake, checking out the many videos on his page shows him to be a loving husband and father. He was also certainly no fire and brimstone preacher. Spradlin was more a ‘share the love’ type of pastor. He worked among the downtrodden and marginalised.

His death reminds us to respect science, to give expert opinion due consideration and to sometimes forgive our fellow human beings their foibles as they hopefully will forgive ours.