She’s the crass talking, take-no-prisoners air hostess, who has fought and air-f#$ked her way to the top of the comedy circuit. For over 20 years, air hosties have loved her and the gays have wanted to be her. She’s worked and recorded material for British Airways, Lufthansa, KLM, Air France, Jet Blue and American Airlines. It seems everyone loves Pam Ann. Her new show “Flight Attendant Star” brings her back to Australia, and all the things she misses. Davina Jones sat down with Pam Ann’s creator Caroline Reid, to find out what it is about Pam Ann that resonates with audiences, what inspired her to pick up the wig, and what she misses about Australia.

“I miss my parents and my brother, because I haven’t seen them in nearly two years. That’s going to be my main priority, apart from my show! The other biggest thing I’m looking forward to is some dim sims. Some dim sims and some fish and chips.

While dim sims rate high on the scale of importance for Reid, so does her family, both blood-related and LGBTIQ.

“I grew up very alternative. I was hanging out with trans, gays, drag queens. I was very alternative back in my early years. It was part of the fabric of my life. So it’s my DNA. If you’re going to have a language, I speak trans and gay. It’s just my world. It’s just what I exist in and what I know really.

“I don’t know the straight world. I don’t get it. I guess I’m what they call, that new thing, gender fluid or pansexual. Pam-sexual?

“With that in mind I guess that’s why I probably have a large following because we all speak the same language you know. And we both love sequins. Wigs. That’s from my mum. I blame my mum because she was a drag queen in the 60s. I get drag queen, trans, trans man, I’ve had it all my life.”

I have to query that – I ask Caroline if her mum really was a drag queen in the 60’s.

“My mum, no she wasn’t a drag queen in the 60’s but she should have been! She would have been amazing. I love that idea. You know in the 60s and 70s, my mum was very glamourous. You know mad men? She had the big hair and the eyelashes. It was that era.

“When your mum was like that, you pick it up. My mum was probably more of an influence than anyone else. She sort of groomed me in a way. Unfortunately I’m not the lady she is, I’m more crass. But she’s definitely a lady, and that 60s fashion is what I’m inspired by.

“But then it got more and more drag as my friends were all drag queens. They were like ‘Hey Caroline, do your wig like this!’ and then the drag queens took over.”

It’s been that connection with LGBTIQ audiences that has supported her to perform in some of the biggest and most prestigious theatre halls in the world, not to mention her own ‘Pam Ann Show’ on television. With so many different performances under her belt, which is her favourite?

“My real passion has to be live stuff, because you can only do comedy if you’re passionate and go through hell and back to be here. It’s a drug. I always say there’s only one absolutely incredible show maybe once every 2 years.

“You might do 350 shows and there’s this one, this one that’s going to do it. It’s just crazy. I understand why Cher and Madonna and all these people perform still. It’s a drug. I really feel like I need that night. That one night.”

“I know stuff going on in their airlines that they don’t even know. American Airlines are showing my videos in their training now. It’s such an honour.

Doesn’t she find it ironic that the very people she makes fun of, are employing her to promote their airlines?

“I have the British Airways horses come up to me on the flight and do it for real. It’s captured their imagination. It’s all tongue in cheek and so fun and I love it. There’s nothing more fun than a BA women horsing up to you, like a horsie, for real. I find it fascinating that they use Pam Ann. I’m blown away too.” 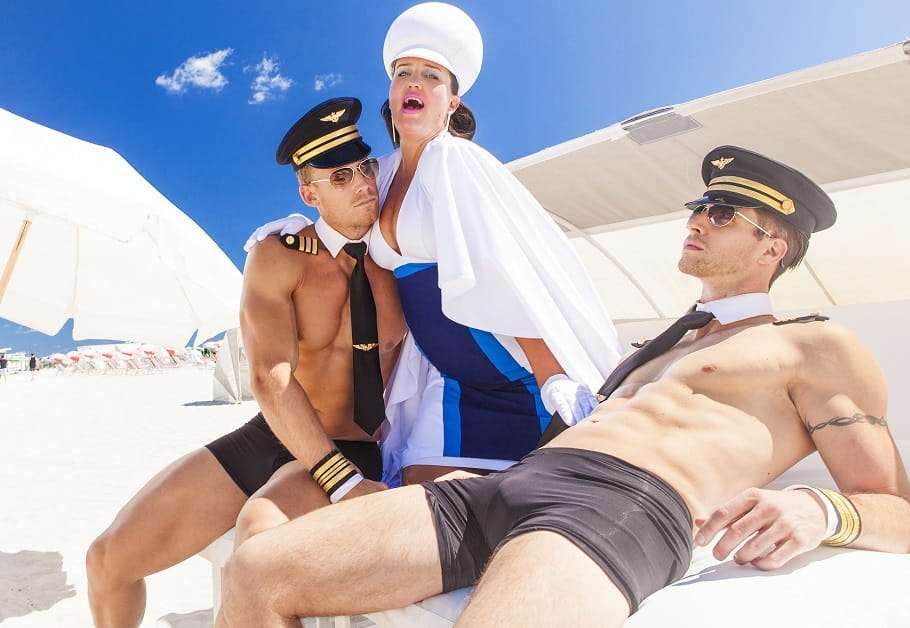 So would she ever do TV again?

“To do a TV show… producing and writing is also my passion because I’m creative in design and marketing, posters and costumes and all of that.

“I really want to try and pitch a few shows again and hopefully get back onto TV in Australia. It’s just about timing and if you’re the right thing at the moment.”

“I haven’t done a lot of participation for a while in Australia and I really want to go back to early Pam. I want to get the audience up. Flight Attendant Star is about finding that person in the audience that could be a flight attendant.

“We’ll get them up on stage and do some silly stuff, and find the star at the end. It’s simple but I want to really connect and be more inclusive of the audience than I have been in the past.

“I’m almost tempted to do a character called Judy Free, like Dame Edna’s Madge. I used to pluck her out of the audience and dress her up. I want to go back to that.

“Barry Humphries, Dame Edna is my main inspiration in my life. I want to hark back to early Humphries. I lived and breathed it growing up. He’s trailblazing, innovative, creator, he’s everything to me.”

So what does it take to be a Flight Attendant Star?

“You gotta know about the airline industry. You’ve gotta know your menu, your aircraft, how to sashay through a terminal building, and how to hide drugs.”

Pam Ann’s “Flight Attendant Superstar” is on at the Tivoli, 28 August 2018. For tickets and tour information, head to www.livenation.com.au.