National LGBTIQ+ group Equality Australia has revealed one in three LGBTIQ+ voters is either undecided or considering changing their vote at next month’s federal election.

Equality Australia has released their major survey of over 5,000 LGBTIQ+ voters ahead of the May 21 election.

The group says the results represent the views of an estimated 850,000-strong cohort nationwide.

CEO Anna Brown said parties and candidates can regain support of a significant voting block by committing to act on LGBTIQ+ issues.

“After a series of divisive debates focused on the lives of LGBTIQ+ people, many in our community are sceptical of the political parties and are yet to make up their mind about who they’ll vote for.

“This election, parties and candidates must act to address issues of concern to LGBTIQ+ people if they’re to win back the support of the voters they’ve lost and to build support amongst those that are undecided.”

Deves is co-founder of Save Women’s Sport Australasia and the Liberal Party endorsed her earlier this month.

Anna Brown said politicians must stop attacking queer communities and using them as a “political football”.

“Politicians must learn that there is nothing to be gained by refusing to stand up for LGBTIQ+ people or using debate about our lives to score cheap political points,” Brown said.

“Enough is enough. The political parties that wish to form government this coming election must commit to governing for all Australians.

“[They must ensure] that every person in Australia can live their life, with dignity and respect, no matter who they are, or whom they love.”

In their major Rainbow Votes survey, Equality Australia heard from 5,600 LGBTIQ+ Australians in February and March 2022.

The group found that one in three LGBTIQ+ voters is either undecided or considering changing their vote this election.

Around one in five LGBTIQ+ respondents that voted for Liberal, National, Labor or the Greens last election are reconsidering their vote this time.

Thirty percent of undecided LGBTIQ+ voters that responded to the survey live in regional areas. The remainder in capital cities or metropolitan areas.

However 94.7 percent of them say LGBTIQ+ issues will be “important” in determining who they vote for.

Equality Australia said for undecided voters, LGBTIQ+ issues are the most important consideration in determining who they vote for.

Equality Australia found that the environment/climate change was the most important issue for LGBTIQ+ people.

This was followed by LGBTIQ+ issues, and then healthcare and the cost of living/wages.

The survey found the strongest support for removing religious exemptions in anti-discrimination laws. 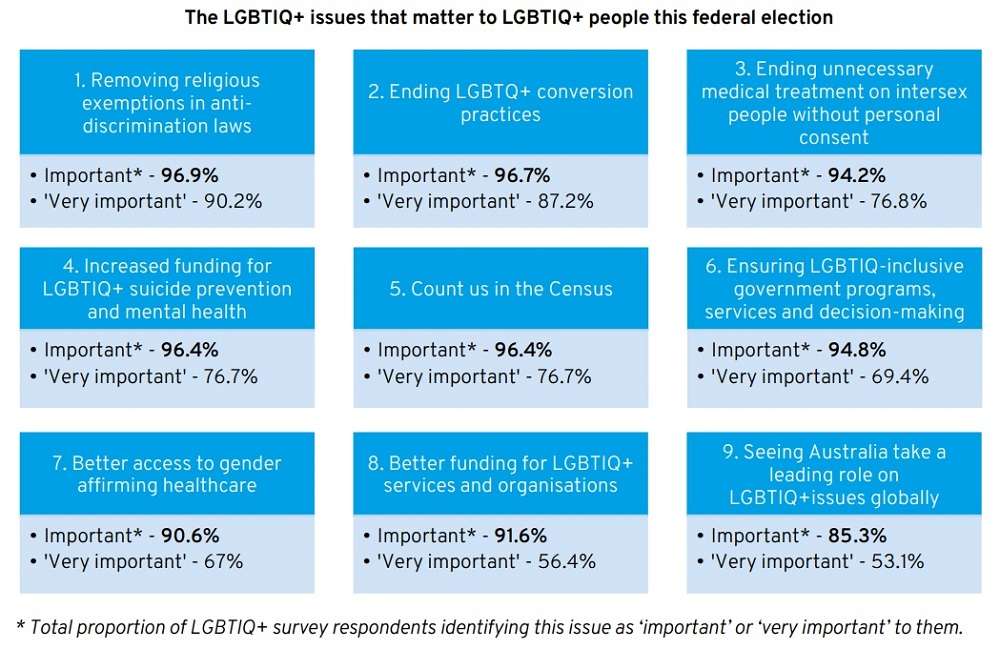 “Our community are deeply disappointed that federal law still allows religious schools to expel, fire or otherwise discriminate against students or staff because of their sexual orientation or gender identity,” Brown said.

“[And also] that we are still subjected to harmful conversion practices that seek to change who we are,” Brown said.

“But the survey also demonstrates that the wider LGBTIQ+ community stands with intersex people who are still subject to unnecessary medical procedures to change their sex characteristics without their personal consent.