On January 18 1975, longtime queer ally Phillip Adams published an article in the Melbourne Age calling for the scrapping of laws against homosexuality. The sooner that happened, he wrote, “the better for all of us, homosexual and heterosexual alike.”

Scroll down for the actual article.

How to even begin to describe Phillip Adams AO?

He’s a columnist, radio broadcaster, intellectual, farmer, and a filmmaker involved in some of Australia’s most groundbreaking movies. He’s won so many awards, listing them all might slow the NBN to a crawl. However, let’s just mention that voters in a National Trust poll elected him a National Living Treasure.

Phillip Adams grew up in poverty and left school early to earn a living. Yet, he’s been a leading Australian intellectual for decades. At the age of 82, he continues to host Late Night Live on ABC’s Radio National four nights a week.

In his 1975 article, Phillip Adams described the then legal situation for homosexuals in Australia as reflecting a ‘witch-burning mentality’. At the time, the Gay Rights movement was still in its infancy. A man could not legally have sex with another consenting adult male, even behind locked doors, anywhere in Australia. Advocacy from someone as prominent as Phillip Adams no doubt contributed immensely to placing the issue on the public agenda.

Phillip Adams said he tried unsuccessfully a decade earlier to organise a conference on homosexuality. However, none of the gays he knew would risk coming out publicly. A famous and flamboyant actor told him, “I know they all suspect I’m a homosexual but they don’t actually know.”

Speaking of flamboyance, Adams also disabused his readers of their misconceptions about gay stereotypes.

“Far from standing out from the crowds, most homosexuals, men and women, are simply part of it. Thus they can occupy prominent roles in commerce, politics, religion, education and the arts without exciting comment. In recent times the world has had a number of homosexual Prime Ministers.”

Interesting. Who could he have meant? None had yet come out but perhaps Australia’s Billy McMahon or the UK’s Ted Heath?

Also interesting, he used the term ‘queer’ as a non-pejorative descriptor in a sentence extolling the contribution of homosexuals to the country.

“Queer Australians have enhanced the way we live.”

He finished with a call to scrap the current laws criminalising homosexuality.

“For, quite simply, the sexual natures of other people are none of our business.”

Click on the clipping to read the article free at Newspapers.com

And we’ve included a bizarre (to us, anyway) response from a correspondent to the Age underneath. 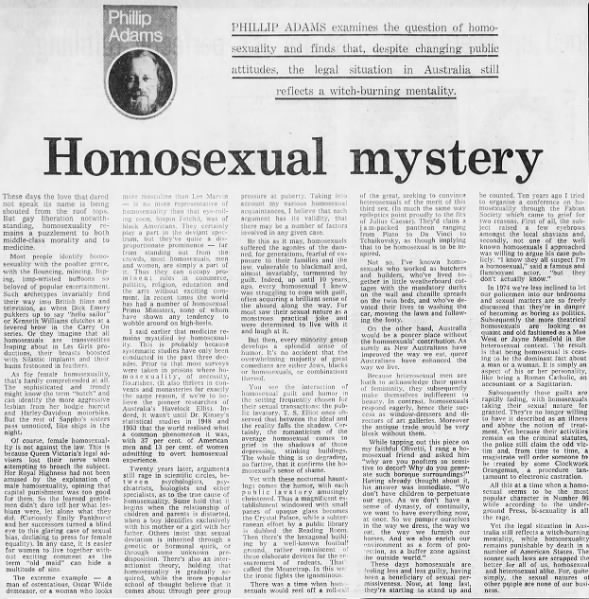 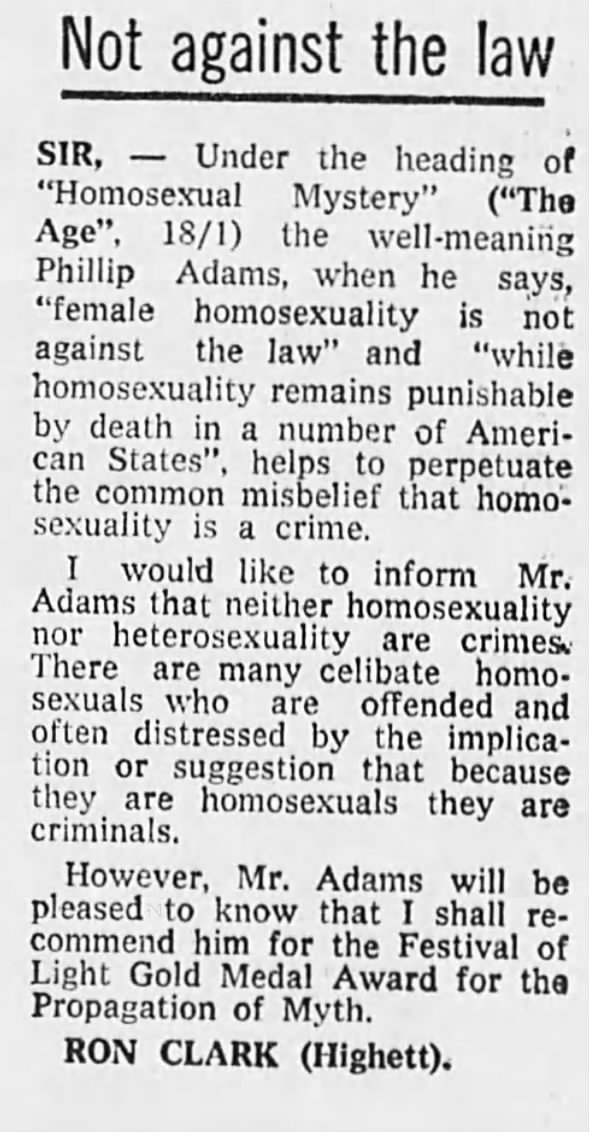 On this day: Homosexuality in America, LIFE, 1964

On this day: Thomas Eakins’ homoerotic The Swimming Hole

On this day: Elizabeth was King: now James is Queen

On this day: Raymond Radiguet, dont call me Bébé