There are places to go in Queensland this New Year’s Eve from the bottom to the top. Cornucopia on Mount Tamborine, STARDUST at Sporties and DJ Dolly Llama at Turtle Cove. Or, for the stay-at-homes, Kylie Minogue will help you see in NYE 2021 with a live-streamed concert. Not to mention the epic drag battle royale at Rumble! Thunderdome.

The safe and inclusive festival will celebrate New Year’s Eve and togetherness on beautiful Dyambrin (Tamborine Mountain) in the Gold Coast hinterland. The event takes place at Eagle Heights Mountain Resort with spectacular views of Surfers Paradise and the Pacific Ocean.

Revellers can check in on Wednesday, 30 December with parking and camping available. That night, DJs Fradge, Yalda & Gregoria and Guy Grey pump out the beats for a seven-hour dance party under the full moon.

Then NYE, Guy Grey and DJ Hectopascal ring in the new year at a nine-hour dance party from 5pm to 2am.

Cornucopia is an 18+ event that complies with Queensland’s current Covid-safe regulations.

Info and Tickets at CornucopiaOz. 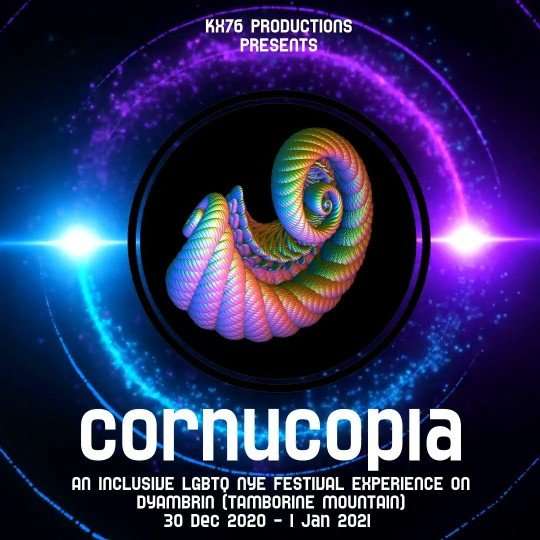 The contenders will go head-to-head in the post-apocalyptic Thunderdome. They compete over several rounds of amazing performances, hilarious games and also improvisation.

After COVID-19 restrictions eased, the drag game show restarted at its home, The Outpost Bar, in August.

However, for NYE 2020, Rumble moves next door to the Fortitude Music Hall.

It’s a supersized drag and also a burlesque extravaganza.

Brisbane’s Sportsman Hotel welcomes 2021 with STARDUST, a brand new show from Dame Liz Taylor. With a costume budget of nearly $10,000, this one will knock your sequinned socks off.

All three bars are open on the night so ring in 2021 with old friends and new at the Gay Meeting Place in Brisbane.

Our own beatilicious DJ Dolly Llama heads north to test her make-up against the tropical heat for this NYE 2021.

DJ Dolly will pump up the volume at Turtle Cove Beach Resort on the occasion of the long-running venue’s biggest party ever.

“Even though it’s a big New Year’s Eve party and daytime Pool Recovery Party, we will have all the COVID-safe measures in place and enforced. We want to kiss 2020 good-bye in fashion and also ensure 2021 starts off with a bang for everyone who comes.”

Bookings essential to party in paradise this New Year’s Eve – check out the Turtle Cove website.

Staying home? Then let La Minogue bring the party to you with a reprise of Infinite Disco.

Kylie’s Infinite Disco performance spectacular returns for one night only with a special live stream on New Year’s Eve.

Infinite Disco takes viewers through a parallel universe from solitary isolation to an alternative euphoric dance-floor community of togetherness. The performance features many of the tracks from Kylie’s Disco, released last month.

Infinite Disco will broadcast across multiple time zones on NYE 2021 so check out Kylie’s website for tickets.