New South Wales Police have raised a rainbow flag outside their Sydney headquarters for the first time, four decades after the first Mardi Gras protest was marred by police violence.

Police force staff raised the rainbow flag next to the Australian and New South Wales at the Sydney Police Centre during a ceremony on Monday morning.

It will be raised every day for a week to mark the 40th anniversary of the Sydney Gay and Lesbian Mardi Gras, NSW Police said.

NSW Police Assistant Commissioner and gender and sexuality spokesperson Tony Crandell said it is a momentous occasion for the force.

“NSW Police proudly promote inclusion, diversity and acceptance within the Force and wider community,” he said.

“We have come a long way and raising the rainbow flag demonstrates the strong relationships we have created and foster with LGBTIQ people and organisations.

“It’s important to celebrate diversity and create a supportive environment for people to feel safe, irrespective of sexuality or gender identity.”

On Sunday night, the ABC’s TV movie Riot told the story of the 78ers, the group of brave gay and lesbian marchers who were arrested and bashed by police officers during the first ever Mardi Gras in Sydney in June 1978.

In 2016, Assistant Commissioner Crandell apologised to the LGBTIQ community on behalf of the New South Wales Police force.

“The NSW Police Force is sorry… for the way that the Mardi Gras was policed on the first occasion in 1978,” he said.

“We apologise, and we acknowledge the pain and hurt that police actions caused at that event in 1978.

“Our relationships today, I would say, are positive and progressive. That was certainly not the case in 1978.” 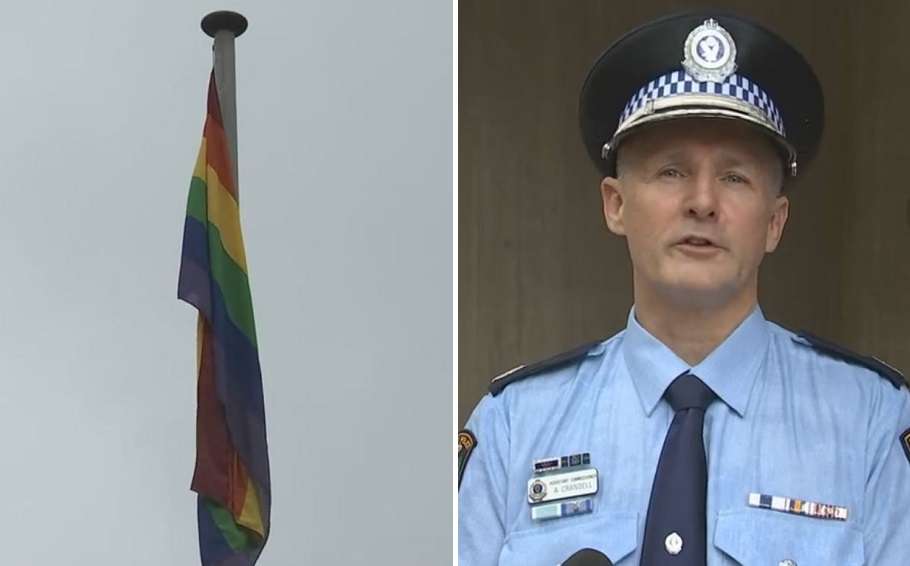 Sydney Gay and Lesbian Mardi Gras co-chair Brandon Bear said the raising of the flag symbolised years of work between police and the community.

“The rainbow flag is something that we hold dear and very close to our heart,” he said.

“To have it raised here this morning is truly a great reflection of the years of work that have gone in from the New South Wales police in becoming a partner and someone who supports us and is truly with us on this journey, this year and every year.”

Justin Koonin, president of News South Wales LGBTIQ health group ACON, said it had been “long, and often difficult, journey to get to this point.”

“Forty years ago we were arrested and thrown into cells at Darlinghurst Police Station,” he said.

“This morning, for the first time, the rainbow flag was raised alongside the Australian and NSW flags at NSW Police Headquarters.

“For sure, there is work still to do. Let’s acknowledge though how far we have come.”

The political farewell speeches – and we’ve only just begun