Frederick Kovert, otherwise KoVert, or Kovert of Hollywood, enjoyed a silent movie career as a drag queen comic and dancer and as a costume designer. When his film career ended, Frederick opened a male nude photography studio in Hollywood — a pioneer of physique photography.

Scroll down for the nudes.

Frederick Kovert’s film career included an appearance in the 1925 silent adaptation of The Wizard of Oz. (No, not as Dorothy.) He stars in a sequence probably designed purely to highlight his talent for design. A magician produces a spectacularly costumed Frederick from an apparently empty cane trunk.

Check out the clip from The Wizard of Oz at the bottom of the article. Hundreds of peacock feathers though less impressive than the headdress he wore in The Queen of Sheba in 1921. That one featured 1000 feathers, was 36′ wide, and weighed 150 pounds.

Frederick Kovert also toured with his own dance show and newspaper articles indicate he enjoyed regular employment as a choreographer and costume designer during the 1930s. 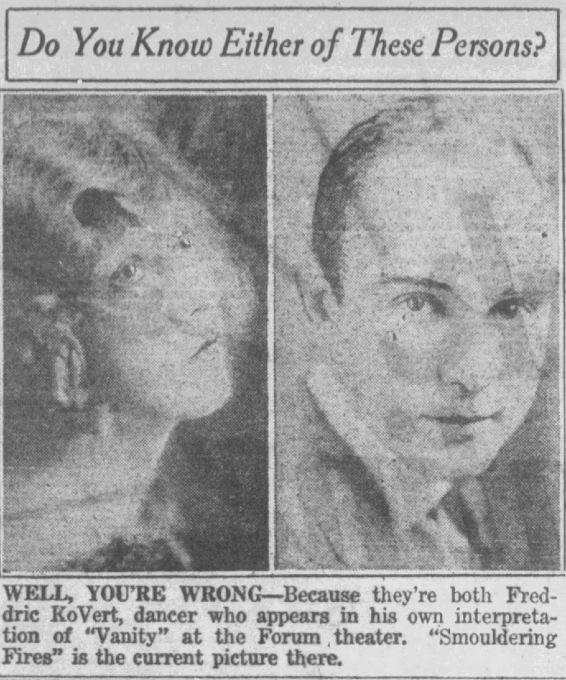 However, in the 1940s, Frederick transitioned to a new career. He opened Kovert of Hollywood, a nude male physique photography studio. His pioneering studio employed famous early physique photographers like Konstantine, Spartan of Hollywood. Bob Mizer also served an apprenticeship with Fred before opening his famous AMG Studio.

Sources differ over whether Fred took pics himself or left that to others while he focussed on mail/male order sales. He boldly placed classified ads for models in the daily papers and displayed nude male photographs in the studio. That proved his undoing with an arrest for selling obscene material, probably in September 1945 when the newspaper ads suddenly stopped.

Few examples of Fred’s superbly lit male nudes survive. His negatives were lost after the friend who inherited them died by suicide.

There is no definitive proof of Fred’s death. But according to rumour, the multi-talented out gay man died of a self-inflicted gunshot wound in 1949 at the age of just 48.

NSFW: Full-frontal nude of Buck Lewis by Kovert of Hollywood.

NSFW: Full-frontal nude of Tom Mathews by Kovert of Hollywood.

NSFW: Another full-frontal nude by Kovert of Hollywood.

Frederick Kovert in The Wizard of Oz.

NSFW: John Holmes, the most famous penis in the world

Disney wizard Dan Benson wants to show you his wand