As a result of Pitt complaining about the unauthorised use of his name and likeness, organisers posted an announcement to their website.

“Due to a scheduling conflict, our former mascot is no longer available.

“Not to worry, we found someone younger, more handsome, and more in tune with heroic masculine virtues.

“Milo Yiannopoulos has accepted the offer to be mascot and Grand Marshall of the parade!”

Of course, the statement made mention of Yiannopoulos’ sexuality, if ambiguously.

“He is not straight, though he does continue to periodically try it out.”

Later, a statement from Yiannopoulos touted his credentials for the role.

“I’ve spent my entire career advocating for the rights of America’s most brutally repressed identity—straight people—so I know a thing or two about discrimination.”

Further the alt-right provocateur stated, “We Here, Not Queer.”

Recently, three men calling themselves Super Happy Fun America announced their plan for the ‘Straight Pride Parade’. They made the announcement in the lead up to Saturday’s Boston Pride.

Media reports connect vice-president Mark Sahady to the Proud Boys, classified by the FBI as a right-wing extremist group.

Lastly, third member, Chris Bartley fills the role of Gay Ambassador for the group. The group’s website describes him as an exile from the gay community.

“He became involved in the straight pride movement after being ostracized from established advocacy groups for merely suggesting that straight people be afforded equal rights.”

So, at this moment in time, exactly 50% of the Straight Pride movement are… GAY!

On social media commenters either mocked the organisers or schooled them on the reasons for LGBTIQ Pride. 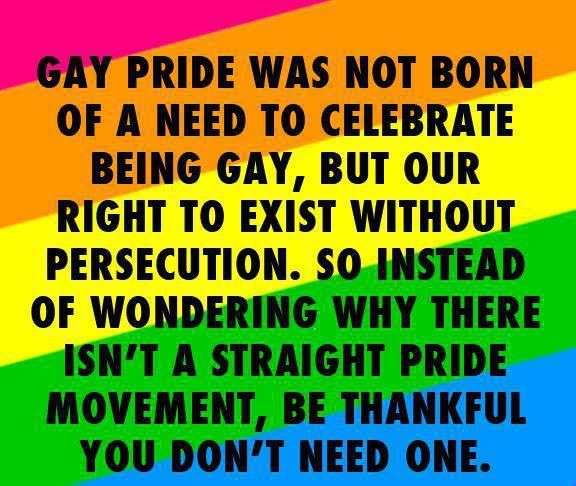 The Straight Pride Parade should end at a giant clitoris so they just end up walking in circles until they die because they can’t find it.

To those of you celebrating straight pride, remember your flag colors and what they mean! pic.twitter.com/QJ99xTTZDB

But the prize for most succinct comment goes to rock band Smash Mouth.