They’re the Australian mums determined to make sure no LGBTIQ person feels unloved or not accepted.

They belong to “Free Mum Hugs”, a group that has a goal of “letting the LGBTIQ+ community know that they are unconditionally loved and accepted” for who they are.

“We know many people reject these precious humans,” the group says.

“The simple act of offering a hug or a high five makes a huge difference to people’s lives.”

In 2018, the group’s US founder Sara Cunningham offered to be a “stand-in mum” for gay couples whose parents refused their wedding invitations.

“I’m there. I’ll be your biggest fan. I’ll even bring the bubbles,” she wrote on Facebook.

The heartwarming post went viral, and Cunningham’s story is to become a movie produced by Jamie Lee Curtis.

In 2018, a group of them put on their shirts and took their signs to the Brisbane Pride march, to share the love with whomever needed a hug.

“We were surprised and overwhelmed as hundreds rushed over to receive hugs and motherly love from total strangers,” Peta said.

“There were tears and sad stories, as well as grateful, happy stories. Many didn’t want to let go.”

And since then, the group’s Queensland members have also gone along to Sunshine Coast Pride and other rallies and events. 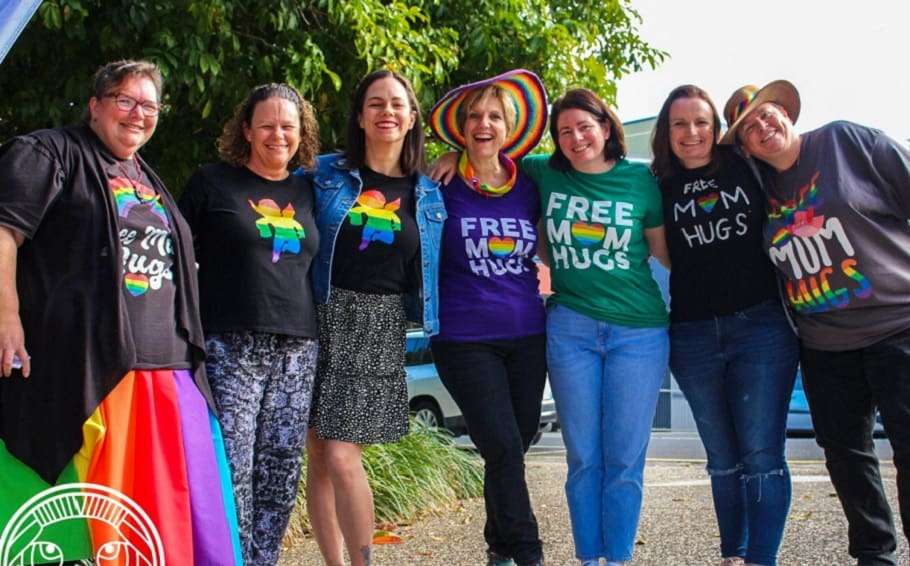 Many of them regularly visit their own local pride events offering hugs and sharing the love.

On Saturday, a Queensland contingent attended Brisbane’s religious discrimination rally in Brisbane, joining the march through the CBD.

“We’re all obviously concerned about the ramifications of this bill on our members and family and friends,” Peta said.

“Not only people from the queer community, but many other areas of society that this bill is going to impact.”