The federal Queensland seat of Groom, in Toowoomba, will go to the polls for a byelection on November 28.

Hamilton has contributed numerous op-eds to conservative publication The Spectator Australia. Among them is a now-deleted June article titled “Absent Fathers Matter”, reported by OUTinPerth and obtained by QNews.com.au.

In it, Hamilton offered up his views on single parent families and the Black Lives Matter movement.

He claimed that it’s “astonishing” that American and Australian protesters “complaining about Black people’s relationship with the law” had not raised “the issue of absent fathers from children’s lives.”

Garth Hamilton cited unsourced statistics claiming children raised without the father in the household were more likely to drop out of high school, commit crimes and use illicit drugs.

He then claimed a “leftist agenda” was responsible for “removing government support for traditional families”.

“Girls who grew up with absent fathers are more likely to suffer depression as adults. In the US 71% of high school dropouts are fatherless,” Hamilton wrote.

“Boys who grow up without fathers in their house are more likely to struggle academically and be absent from school.

“Fatherless children are far more likely to use illicit substances at a young age. Research dating back to the 1800s shows a clear link between absent fathers and crime rates among their children.

“Although these facts buck the leftist agenda of removing government support for traditional families, these facts cannot be ignored.”

In the op-ed, Garth Hamilton continued, “If the Black Lives Matter movement wants to be taken seriously it should demonstrate a commitment to their own cause.

“Black fathers need to show that black lives matter and stay at home with their kids.

“Both Aboriginals and African Americans are far more likely to be raised without the presence of a father than white Australians or Americans. 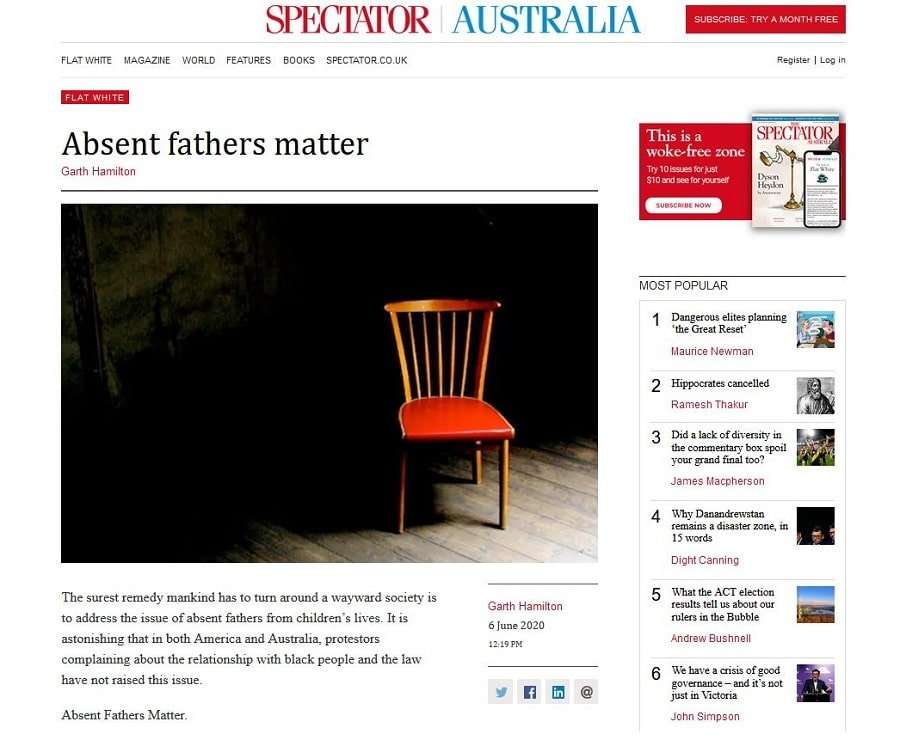 The Spectator Australia has since removed Garth Hamilton’s article, dated June 6, from its website.

An LNP spokesperson told QNews.com.au, “In his Spectator article, Garth was making a point about the importance of fathers being involved in their children’s lives, wherever possible, particularly in disadvantaged communities.

“Garth was expressing his concern about how we can give all children the best start in life – and that requires the active engagement and involvement of parents and family.

“If elected as the Member for Groom he will work hard to represent, and deliver for, the whole community.”

Voters in the federal electorate of Groom will go to the polls for the byelection on November 28.

Pure Catering is hiring, and you can join their Brisbane team