A number of extraordinary people blessed Queensland’s rainbow communities with their presence and efforts over the years. They worked to build a sense of community, to combat unjust laws and to protect us from a plague of biblical proportion. Over the coming months, Bill Rutkin OAM will profile the remarkable individuals whose efforts benefitted us all, starting with a woman of remarkable ability, the inimitable Toye de Wilde.

She lived her life then, as she lives it now, on her own terms. She never saw a glass ceiling she couldn’t put her stiletto through.

Born of Norwegian stock in Melbourne as ‘L.N.’, Toye grew up on Stradbroke Island. At that time in Queensland’s history, rigorous social rules underscored by legal and religious fiat imposed inequality, racism and injustice on all citizens of the state.

Homosexuals were subject to violence and blackmail. Often that came at the hands of the police. Private, consenting, adult male same-sex acts incurred longer jail terms than manslaughter.

As a child in the early 1950s, young L.N. high-kicked and danced the length of Ruthven Street, Toowoomba. Our Toye led off the very first Carnival of Flowers.

As a teenager in the late 50s, L.N. kept company with the notorious (according to the Murdoch scandal rags of the day) Gypsy, Rosa, and Mollie, three of the great characters of the early Brisbane drag scene.

At the time L.N. worked at Barry and Robert’s Department Store in Queen Street. She commenced employment there at the age of fifteen. Soon however, a metamorphosis took place. The fabulous and unique Ms Toye de Wilde emerged from her youthful chrysalis.

From ‘Bruna’ to Toye de Wilde

Toye remembers the mythological reference as beyond the ken of most of the queens of that era. However, the ‘plaything’ notion caught on.  In no time, she became known as Toy to which she later added an ‘e’.

At the time many nightclub performers subsidized their meagre earnings by providing personal services to gentlemen. However, Toye, shattered that mould, seeking more reliable employment to enable her to live and work as a woman.

By 1963, she became the star turn at Pinocchio’s, a night club in Ann Street opposite the Empire Hotel. That despite Noel Coward’s warning to her delightful, proud and supportive mother Verna, not to put her daughter on the stage. (Verna was later a much-valued drinking companion of your correspondent.)

She then took employment with the outrageous self-publicist Warren working the bar at the National Hotel. Warren always dressed as a male, but in spangled vests, blue eyeshadow, very heavy foundation, lipstick and nail polish. I recall a photo of Toye in the Sunday Truth when she commenced work there. That certainly caused something of a sensation at the time.

With bar experience under her belt, in 1967 Toye opened Brisbane’s first true gay bar at the International Hotel in Boundary Street, Spring Hill.

Prior to this, a few hotels and coffee lounges tolerated homosexuals during quiet times. However, they insisted their premise remain to all appearances, superficially straight.

In 1968, Toye flexed her growing commercial power. She took herself and her regular customers a hundred or so metres up the road to the Alliance Hotel and established the Moon Lounge in the pub cellar.

I was not quite legal age for alcohol consumption, despite working in hotels since the age of seven. I recall with great joy the opening night. Seagrass matting, plastic palms, cane chairs, Polynesian décor, dimly lit with coloured bulbs.

The beer was cold — the atmosphere hot. I found myself mesmerized by the amyl and a darkened back corner.

Later there was finger food and a show. In those days sound systems usually consisted of a record player or a reel-to-reel tape deck with small speakers.

Toye worked as barmaid, hostess and entertainer. During performances, her catchcry “more noise, more noise” got the punters clapping and cheering. She transformed Dullsville into BrisVegas.

She opened another gay bar in Adelaide Street on the lower level of the Union Club Hotel.

While only young, your correspondent learnt that Brisbane’s most notorious queens inhabited eleven of the twelve flats of Wickham Terrace’s Pink Palace. I immediately rented a room from the wonderful Shirley Bassey — not the Shirley Bassey, you understand, but Shirley Bassey, the Innisfail version. 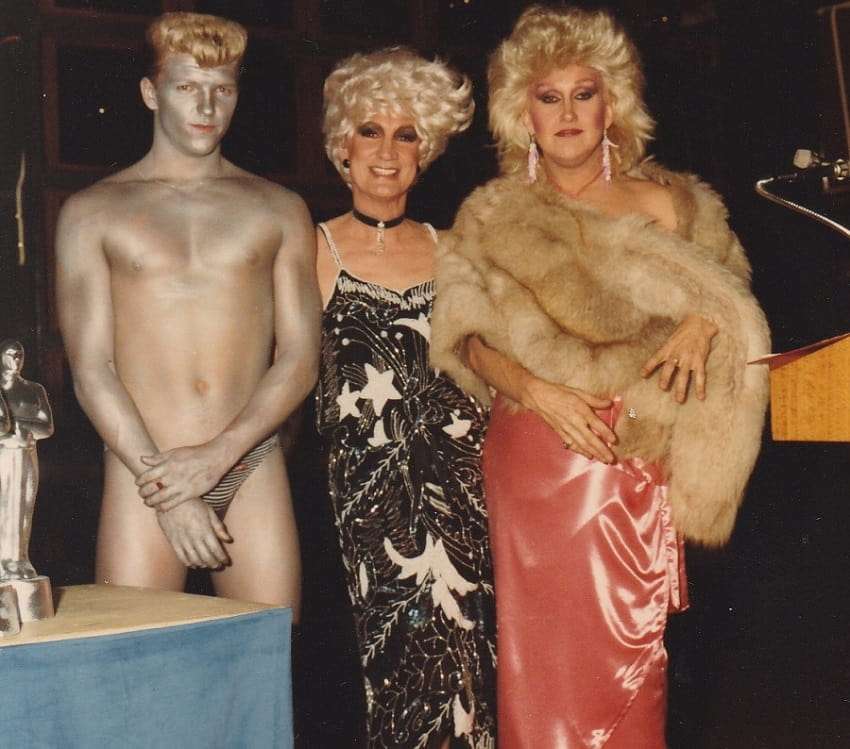 At about this time, Toye’s relationship with Ian deteriorated. She fled to Melbourne and opened a gay bar at that city’s London Hotel.

Previously, ‘Madam’ (as I respectfully called her) generously took this blushing, junior bush princess under her wing. She introduced me to Bill and Gloria Bothwell, Mrs B to the gay community, at the Union Club. I, therefore, filled in for Toye until a year later when circumstances allowed her safe return.

To celebrate that momentous occasion, I purchased a small black tennis frock and plastic jewellery from Coles for the “SHE’S BACK” party.

My chosen accoutrements prompted Dame Sybil von Thorndyke (longest resident of the Pink Palace) to christen me with the drag name I still answer to.

In 1971 Toye actively supported the formation of the Campaign Against Moral Persecution (CAMP — also the word we used to describe ourselves — ‘gay’ then considered an Americanism and rather low rent).

CAMP’s clubrooms opened upstairs at 379 George Street after the initial meetings in Toye’s bar at the Alliance.

Toye supported the first tentative community steps regarding the onslaught of HIV with meetings in her bar of the Alliance Hotel in 1983.

Her indefatigable support of Queensland AIDS Council during those dark days was as heroic as it was generous.

The meeting places Toye created for the rainbow community provided refuge and rallying points for our communities and information centres in the days before social media.

She was the much-loved agony aunt for desperate people with no one to talk to or cry with. She was our fundraiser in chief, our recruiter of volunteers, the ‘hostess with the mostest’ at community functions.

Toye chaired and drove fundraising for the David Kopp Foundation for many years.

This community charity fundraised to outfit Wattlebrae, the HIV/AIDS ward at Royal Brisbane Hospital. Many members of our community passed their last days there in the late 1980s and early 90s.

For many years Toye wrote a column for Queensland Pride, a rainbow community newspaper with huge content and an enormous readership.

Her insightful and practical commentary on the issues of the day helped the rainbow community understand its power as a combined constituency.

Espousing values of common humanity, integrity and kindness she was the unpaid uber-social worker that enabled many of us to survive and prosper.

In 1987, Toye agreed to run as a candidate in the Merthyr by-election. There was a hunger for social change in the air, the tide had begun to turn against Bjelke-Petersen’s rotten regime.

A collective of over fifty Rainbow volunteers distributed policy statements to letterboxes across the electorate.

Opponents disturbed by the candidacy of a ‘crossdressing, homosexual pervert’ tore down her election posters but volunteers quickly replaced them.

One event is seared into my memory. Toye attended a large ‘meet the candidate’ event at the Hacienda Hotel, a meeting designed as an opportunity for the media to ambush and publicly belittle the candidates.

Toye’s long history of controlling huge drunken audiences stood her in good stead to deal with a cynical media pack.

The veteran senior political journalist from Murdoch’s rag, the Courier-Mail, actually subsequently wrote praising Toye’s grasp of the issues and of her ability to manage hostile questioning with calm good humour.

In our hearts, we always knew our Rainbow candidate couldn’t win. Nevertheless, Toye did surprisingly well.

Far more importantly, she very publicly proved a broad range of points in the arena of public opinion and in doing so, once again, smashed numerous shibboleths.

Toye’s ability to articulate matters of public concern surprised many. Undoubtedly, they expected someone with a slighter grasp of issues, more shallow interests and somewhat less articulate.

The general public for the first time became aware of her as a trans person.

People came to see her as a decent if somewhat extraordinary person whose life was beyond their experience.

Many also saw that perhaps members of their own family might inhabit the hidden demi-monde of the homosexual.

In between opening and running bars, Toye worked with the Les Girls troupe in Kings Cross. She guest stared at numerous Queen’s Birthday Balls.

She was one of the first trans entertainers in Australia to sing in their own voice.

For more than forty years it would be difficult to conceive a single community cause that did not rely on Toye to endorse, promote, recruit or fundraise.

Toye was never on anyone’s payroll — she gave so fully of herself from her enormous heart. Everything she did and still does is done for, and with, love.

I am aware of the effusiveness of my biography, but believe it honest. I suspect many share the love and respect I have for my remarkable friend.

It seems unlikely that anyone else in LGBTIQ Queensland history has been so universally loved and admired.

I cannot imagine that a single unkind word has ever been uttered by or about this unique woman.

If there is ever to be a living example of how our lives should be lived it is hers.

A paean to a living treasure of Queensland

How fortunate are those who have known her,
blessed are those touched by her grace and compassion,
how light is the burden of those who come after her.
This woman is our saint.
Our privilege to witness the amazing Toye de Wilde
radiating serenity of spirit, calmness and clarity of mind
her words touch every listener’s soul,
generosity and sensitivity flow from her open heart
she inspires us to be better than we might have been.
For five decades community initiatives have enjoyed her patronage, her ethical advice, her enthusiastic and unstinting support
which lost soul has not been comforted by her warm embrace and sound advice?
We can only applaud and love you, Toye de Wilde… Mother of our Tribe